BUT THIS WAY you don’t have to go to space school.

The above video was created by using thousands of photographs taken by astronauts from inside the International Space Station. While the footage is originally from NASA, The Atlantic has taken the liberty of editing together the best parts, including the Northern lights over the Poles and lightning crackling in the clouds. 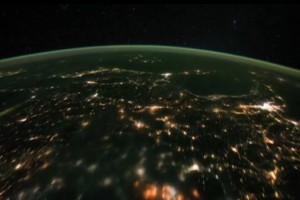 "Earth as Seen from the International Space Station"

And in case you were wondering, that’s Chopin’s Nocturne No. 2 in E Flat Major, Op. 55.

There’s something humbling about such a complete view of our planet, with the only signs of human life represented by the masses of lights scattered around the continents. Can you see your house from here?

Video: The Gateway to Astronaut Photography of Earth