Island-hopping anywhere is an easy sell. But with the promise of islets so secluded you can have them all to yourself, Palawan, Philippines, sets a high bar for anywhere.

Of the 7,000-plus islands that comprise the Philippines, some 1,780 belong to Palawan, the archipelago’s westernmost, and most isolated, province. Long, skinny Palawan island sits at the center, drawing a diagonal between the South China and Sulu seas, stretching almost as far south as Borneo. Surrounding it are small, undisturbed islets whose siren calls have yet to bring the mobs that descend on Thailand, Vietnam, and Boracay, the beach of choice for many travelers to the Philippines.

Photographer and Matador Network’s very own Creative Director Scott Sporleder, who’s been visiting Palawan for the past decade, shares what it is that keeps him coming back, and why anyone would be lucky to spend five perfect days island-hopping around the Philippines. Better yet, he’ll now be guiding this very adventure through Matador Trips, teaching you how to take epic photos of Palawan just like these. 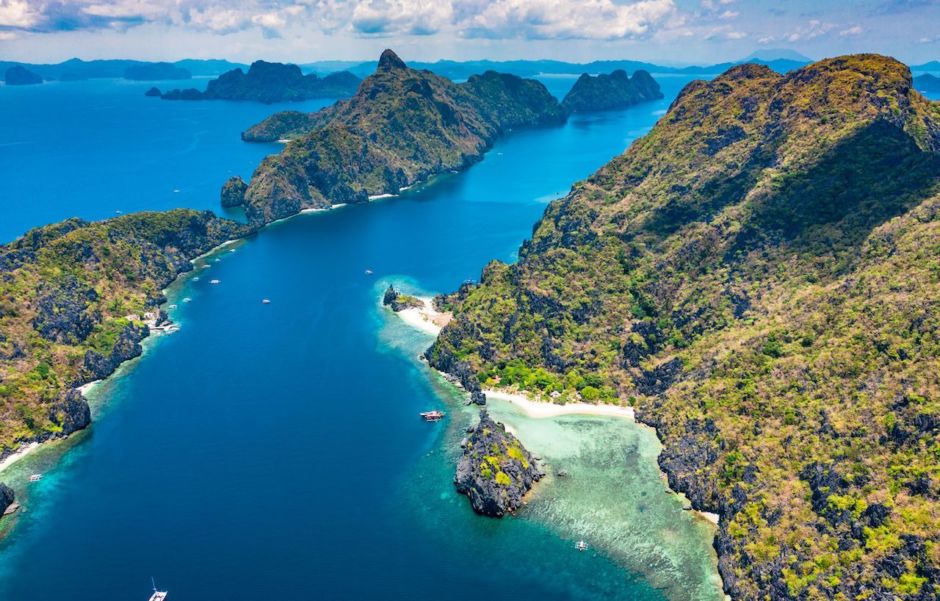 A pristine pocket of the Philippines

Palawan is an ecological powerhouse where old-growth and mangrove forests, karst cliffs and caves, and unspoiled beachfront create habitats for over 100 at-risk species, including 42 that are endemic to Palawan. Underwater, coral reefs harbor octopuses, eels, and a world of brilliant tropical fish. Though Palawan island plays host to a smattering of urban centers, much of the province remains uninhabited, a great big empty backyard just begging to be explored. 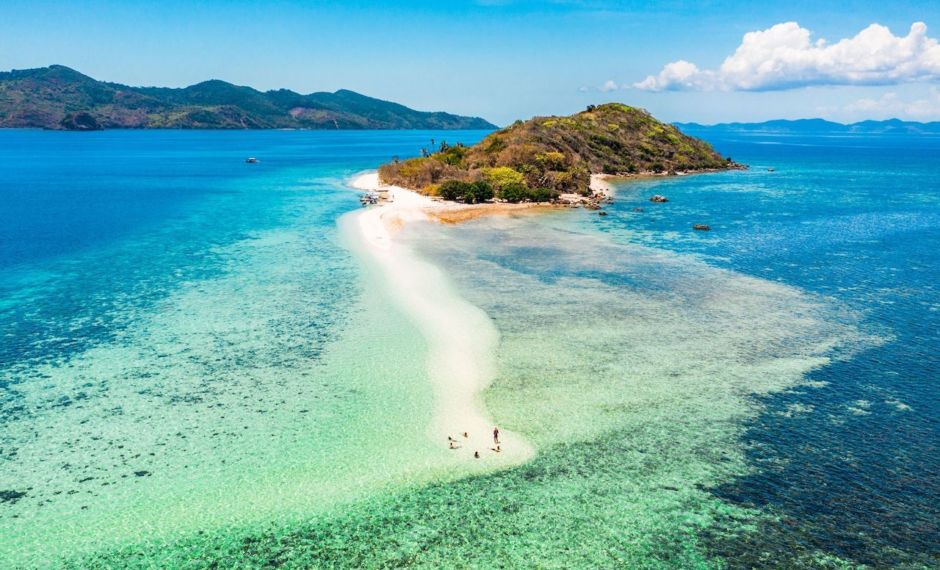 Perfect islands all to yourself

Island-hoppers might make two or three landings in a day, cruising Palawan’s enviably clear waters until it’s time to trade surf for sand. “You hop off, spend an hour or two walking on a remote desert island, and it’s just extreme paradise,” says Sporleder, who considers Palawan one of his favorite places. A tip: Try your hand at volleyball on at least one outing to make it a proper Filipino beach day. 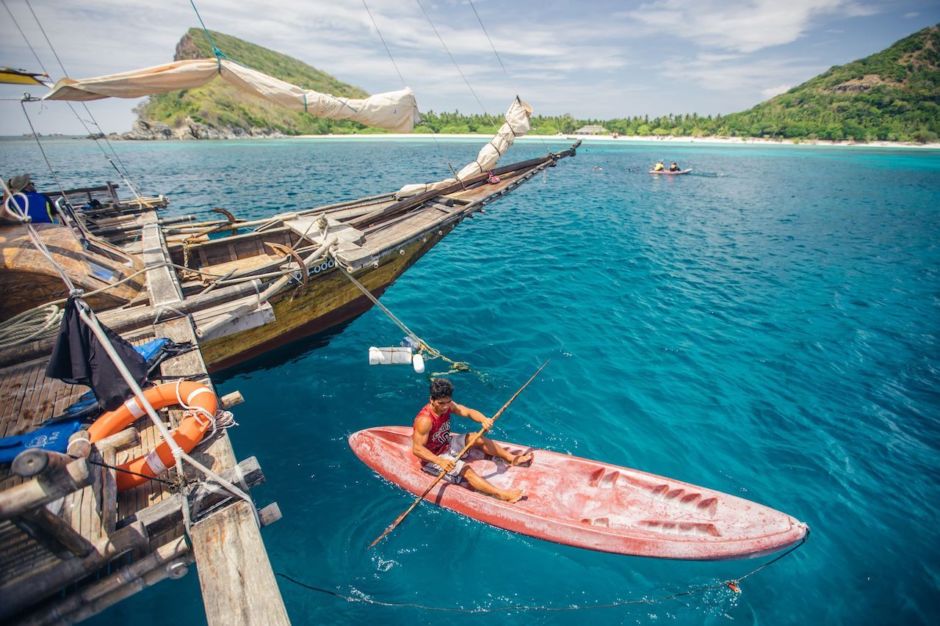 Cruising as a way of life

Snorkeling, kayaking, and paddleboarding are never more than a few feet away when you’re living the island-hopping life. But time spent on the boat is just as much a part of the experience. “Grab a book or hang your feet off the side and watch the islands go by,” says Sporleder, adding with a laugh, “That’s the itinerary... You cruise, and you eat good food, and you get off on these kayaks, walk around, maybe look at some seashells, and the next thing you know, time’s flying.” 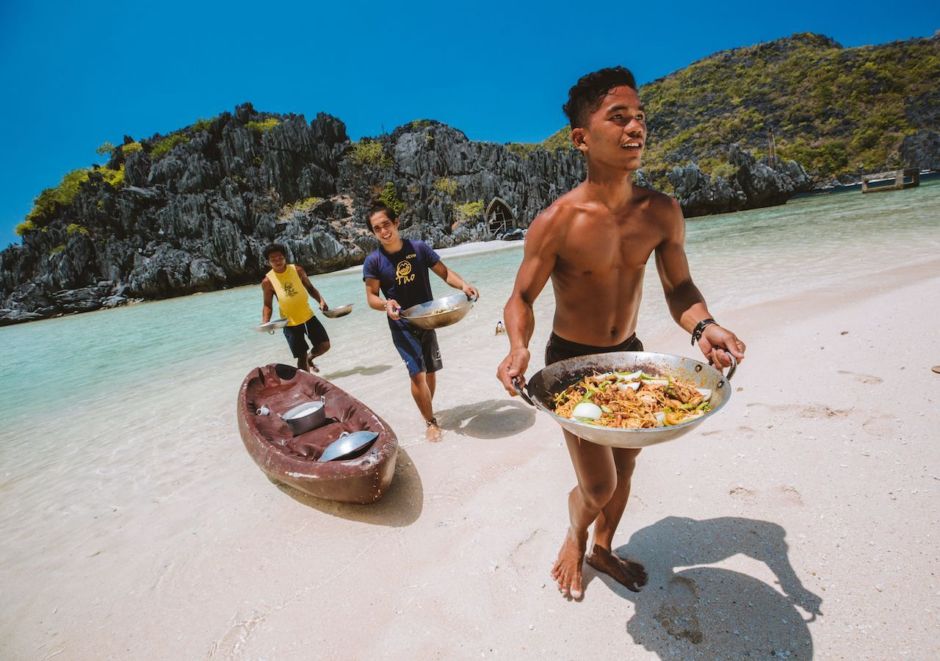 Boats may drop anchor just off the coast, with travelers kayaking or swimming the last stretch to an island. Sometimes, lunch follows suit. “Depending on where you stop, they’ll cook on the boat, then kayak the food in and set up a picnic right on the beach,” says Sporleder. Talk about dining with a view. 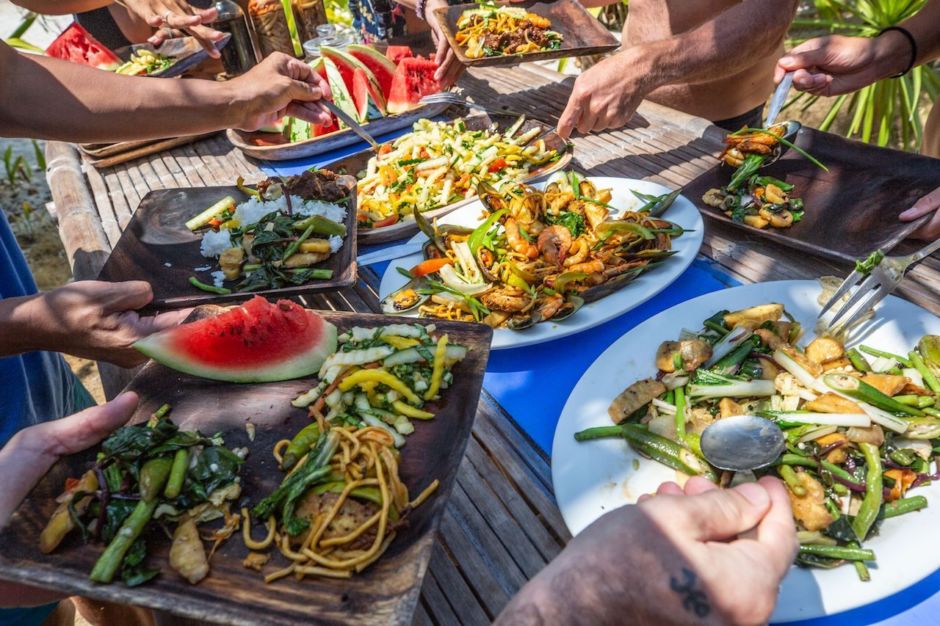 Even more delicious than the views served up at Palawan picnics are the actual dishes, an assortment of vegetarian- and seafood-leaning preparations made from locally grown produce and fresh-caught fish. Alongside sustainability and island bounty, mealtime in Palawan also celebrates classic Filipino flavors like ginger, lemongrass, and lots of garlic. 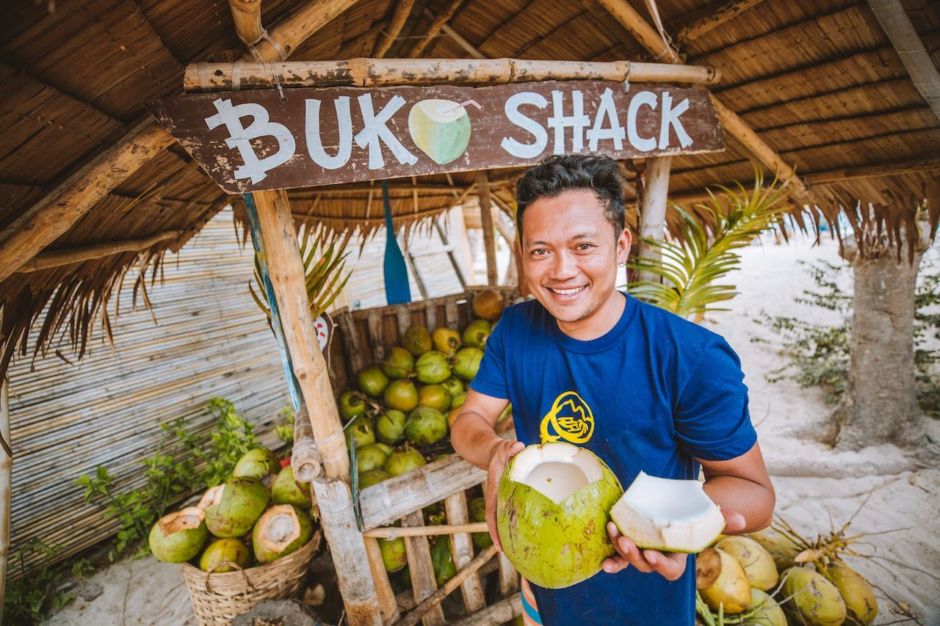 Like elsewhere in the tropics, many of Palawan’s favorite desserts grow on trees and bushes. Though pineapple, mango, and papaya are staples of the Filipino diet, coconut, or buko, has a special place in local hearts and stomachs. Not only does it feature heavily in the cuisine, but it’s also hard to beat sipping coconut water straight from the source, a ritual island-hoppers may grow accustomed to while lounging in the hot Palawan sun. 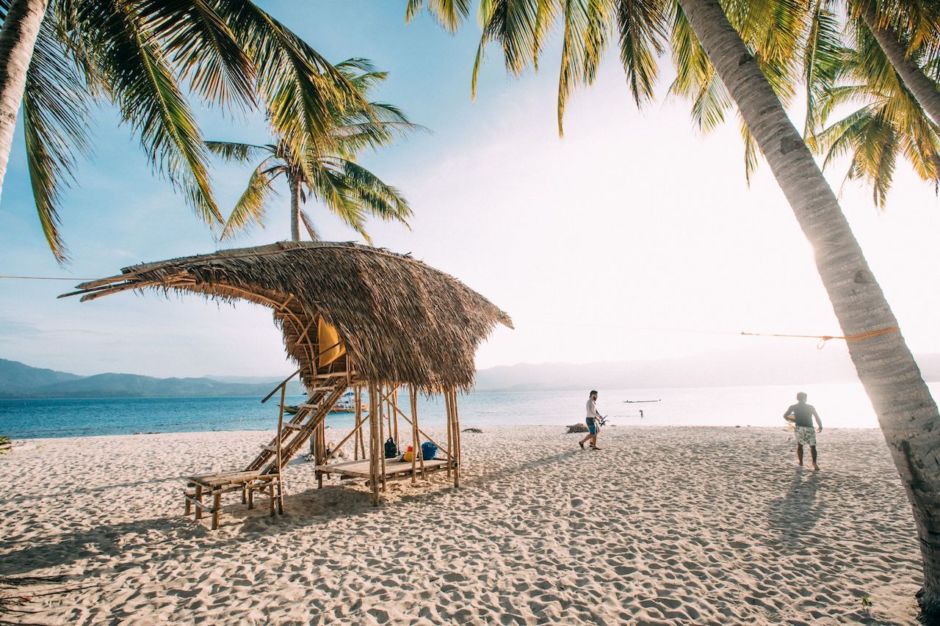 Setting up camp in the sand

Scattered across the islands are base camps where travelers can relax after long days on, and in, the water. Tukkas, or sleeping huts, are set up right on the beach, guaranteeing travelers uninterrupted panoramas for the entirety of their trip. The huts were designed to resemble the nests of the native Philippine swiftlet bird. And put you in the mood to nest they certainly do. 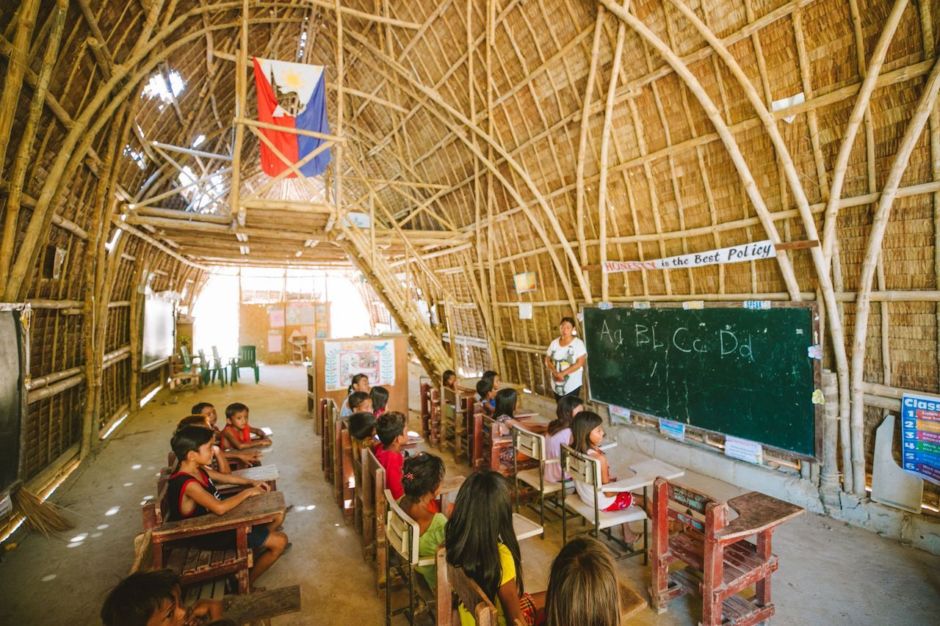 Some of Palawan’s islands are, in fact, inhabited, and base camps often share these islands with small villages. Visiting these communities, island-hoppers have the opportunity to see what life is like for Palawan’s permanent residents, from fishermen to schoolchildren. Several schools, like the one pictured above, were built on the islands where base camps were established to bring in teachers and give back to the community. 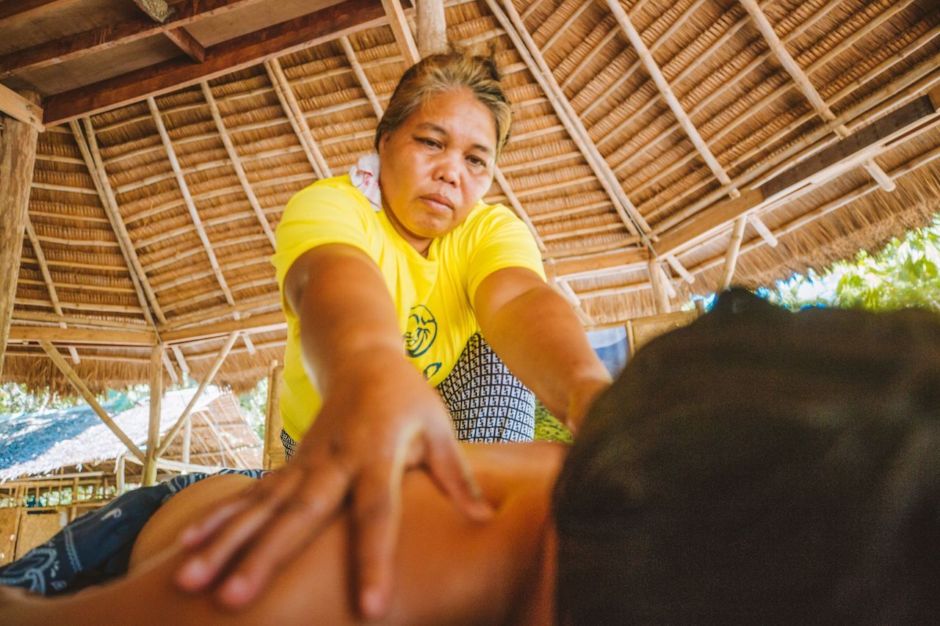 A number of local women, many the wives of fishermen whose own job opportunities are limited, have been trained in wellness techniques and employed at base camps, as well. Beloved buko plays its part here, too: Along with organic soap, massage therapists also make coconut oil to use during treatments, the ultimate gift for sore, snorkeled-out muscles. 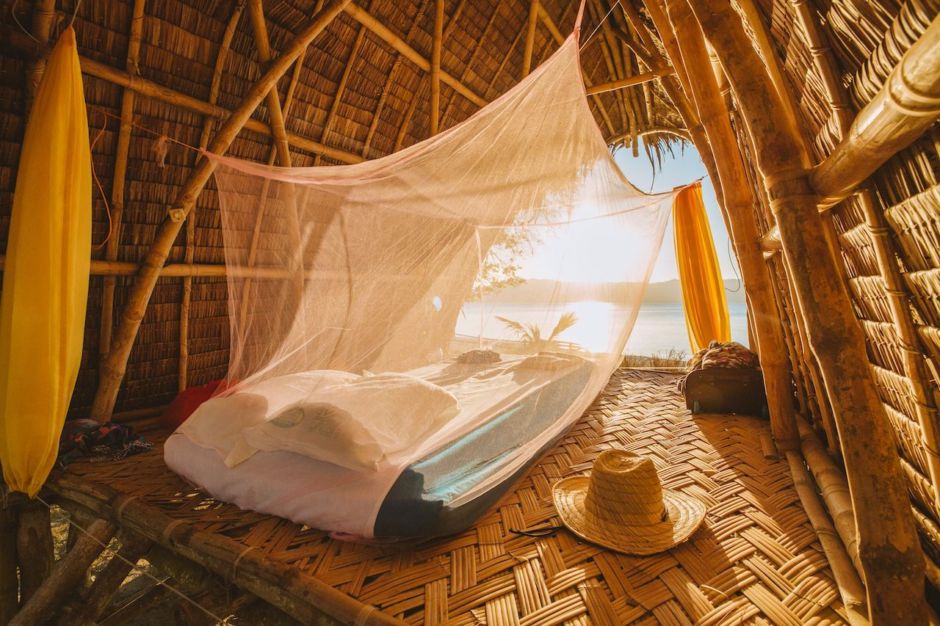 Winding down to the rhythm of water

There’s no better way to end a long day of island-hopping than crawling into your very own beachfront abode, a place to process the day’s wonders to a soundtrack of lapping waves. “It lulls you to sleep being surrounded by water and crickets and birds,” says Sporleder, joking that it’s like a natural noise machine. “It’s just the most soothing thing you can imagine.”

Languages10 Tagalog Slang Phrases Travelers To the Philippines Need To Know
Tagged
Beaches and Islands Trip Planning Philippines
What did you think of this story?
Meh
Good
Awesome

The Sapphire Hinatuan Enchanted River in the Philippines Is Jaw-Dropping