In the remote, far-eastern tip of the island of Java, a stone’s throw away from paradisiacal Bali, stands the active Ijen volcano complex. In the middle of this complex is Kawah Ijen, a volcano like no other. Kawah Ijen is home to the largest acidic crater lake in the world. Its shimmering turquoise waters are surrounded by vents expelling sulphuric gas. This suffocating environment is extremely hostile to life, yet some people spend entire days on the volcano. These people are the sulfur miners of Kawah Ijen.

The volcano is far from urban centers, the nearest city of Banyuwangi is 20 miles away and no roads go to the crater. The one-hour steep trek up to the base camp on the crater’s rim is tough, but it’s probably the least difficult part of the 230 or so miners’ job. Twice a day, they go down into the solfatara to collect hardened, cooled sulfur, and carry fully loaded baskets back up to the camp. They then carry it all the way down the volcano to be weighed. Their life expectancy is said to barely reach 50 years. 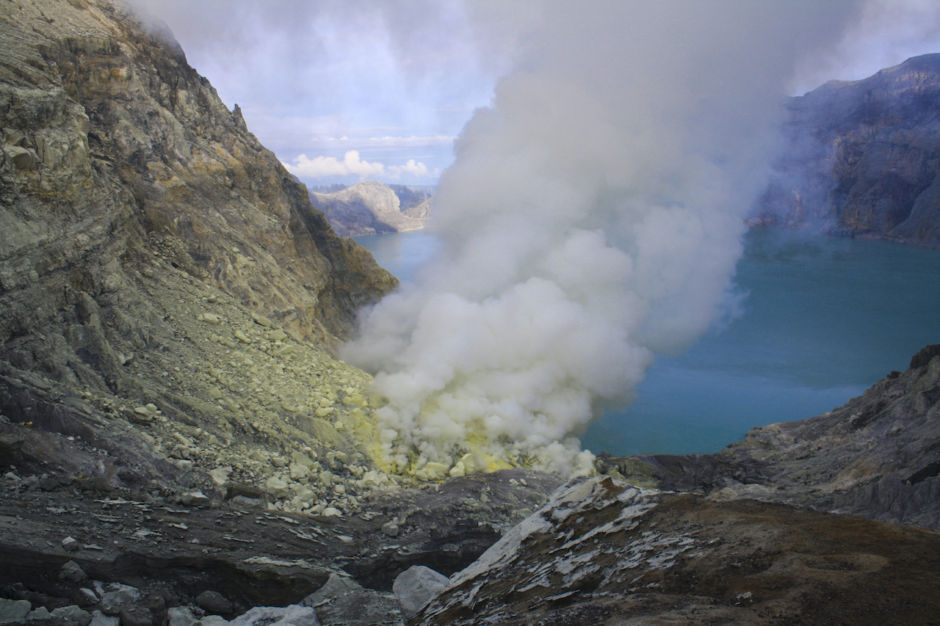 The “devil’s gold,” as the miners call it, is the result of sulfuric gases that come out from cracks in the volcano and condense into a liquid. That liquid, molten sulfur, then flows out into the crater before cooling and hardening into a chalky, yellow rock. For the process to be easier and faster, a mining company set up pipes on a vent to redirect the liquid sulfur so that it pools on a flat surface rather than down the slopes of the crater. The miners use metal rods to dislodge the ore and to break it down into pieces that they then carry in baskets. The exploitation of the sulfur mine started in 1968, but there’s been next to no modernization (other than the installation of the pipes) to the mining process since then. 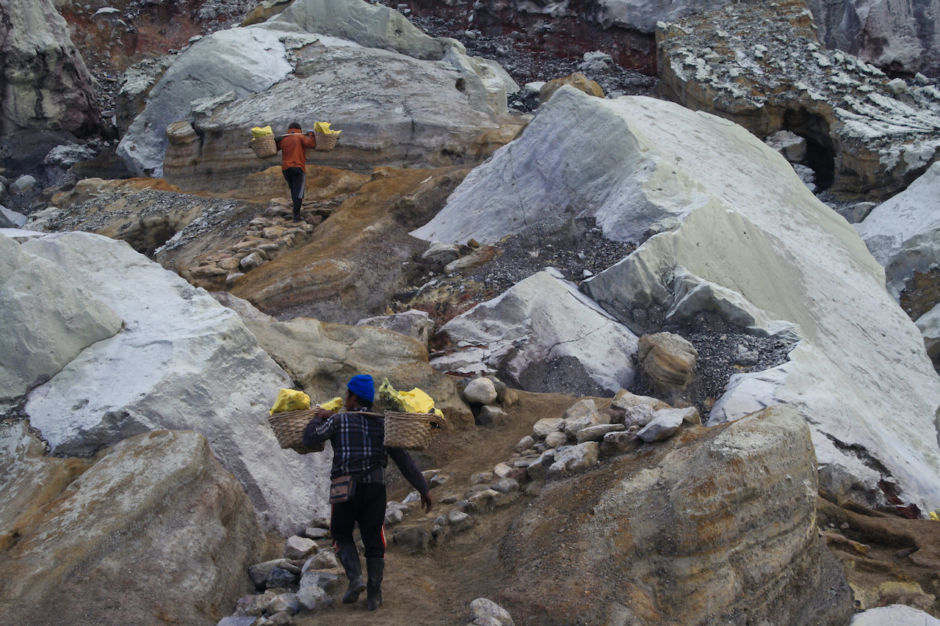 The miners of Kawah Ijen use almost no protection despite the grueling conditions. The heat is almost unbearable by the vent and the volcanic gases make it near impossible to breathe, even with a gas mask. The gases burn the miners’ lungs. 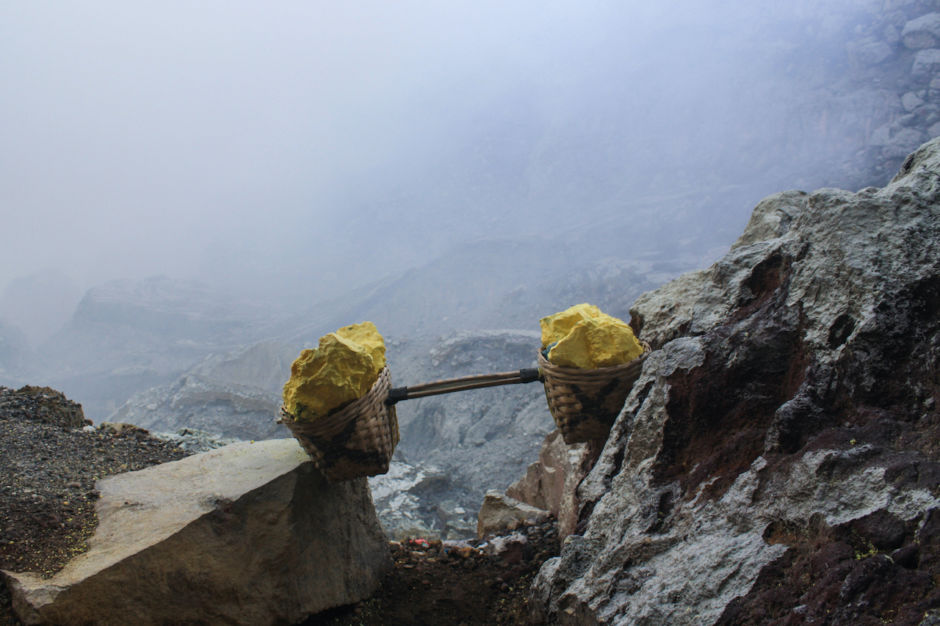 The baskets used by the miners can weigh up to 200 lbs and are carried on their shoulders for a half-mile upward hike. This results in many health issues such as burnt skin on their shoulders from the friction of the heavy baskets, irreparable back issues, and knee pain. 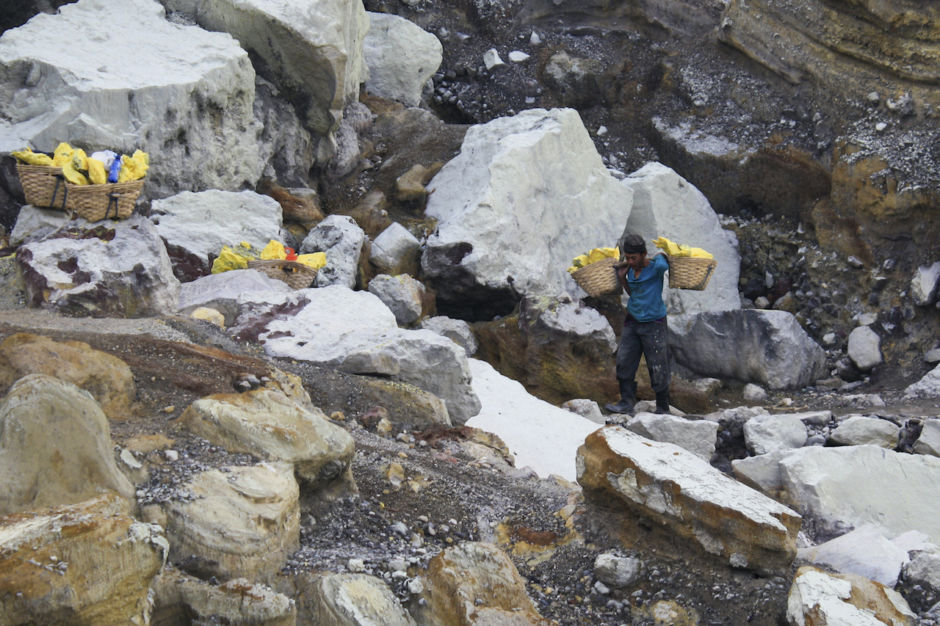 The rocky and steep terrain adds to the difficulty of the fully loaded baskets and makes the trek back up extremely difficult. The miners stop often along the way to catch their breath and rest. Modernization of the mining process through mechanization might endanger some of the miner’s jobs. 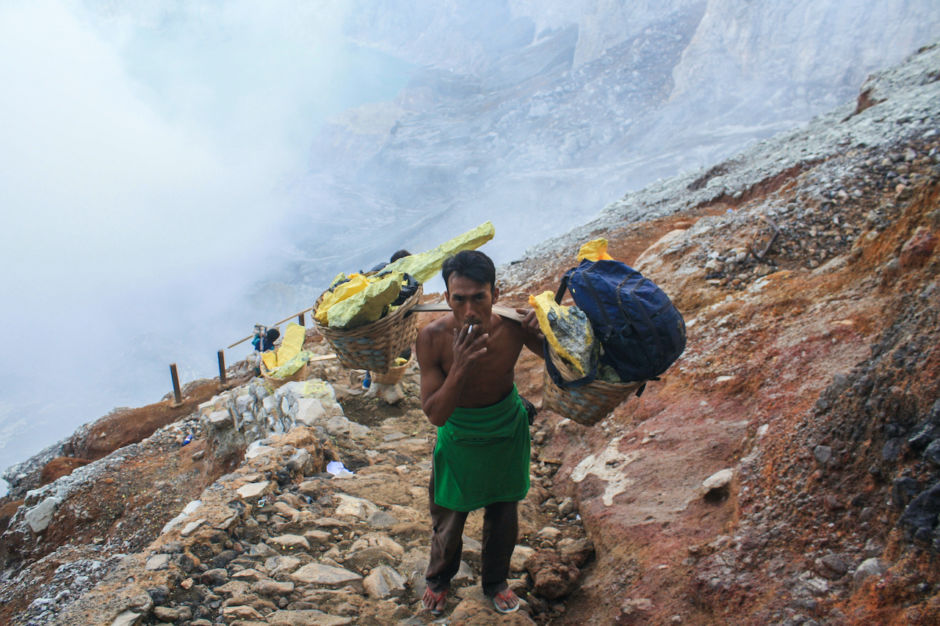 Supeno is 35 years old; he has been mining sulfur since he was 23. He is a father of two and mining on Kawah Ijen is his way to provide for his family. The miners make an average of $5 per trip down into the crater. In recent years, the local government has been trying to make the crater a tourist attraction, and it’s achieving some success. However, that comes with its share of issues as visitors are often ill-prepared for the demanding trek and rough conditions. Tourists often get in the way of the miners, but with them also comes new opportunities; some miners are turning into guides and are able to make extra money selling sulfur-carved crafts. 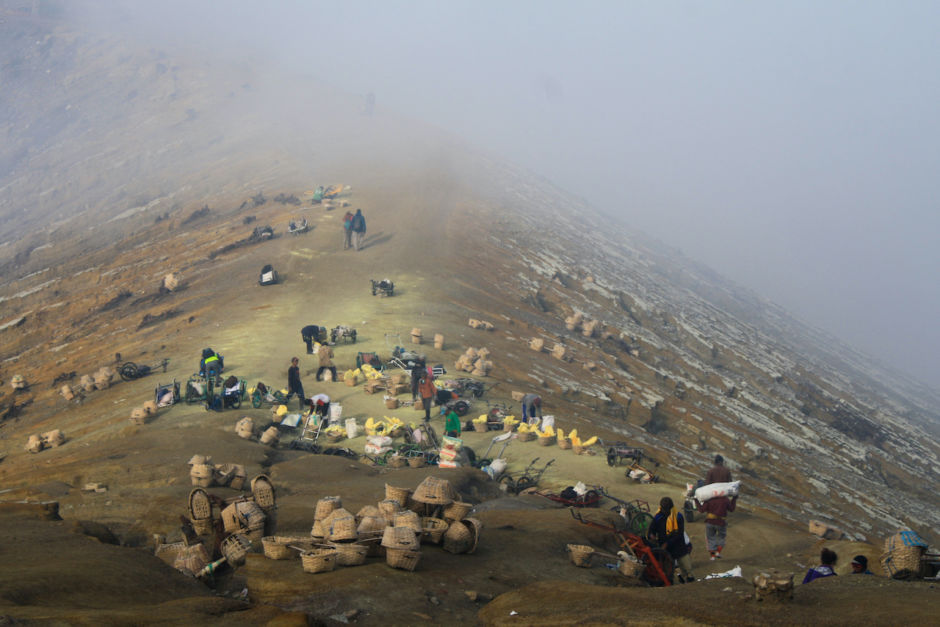 The base camp on the crater’s ridge is located two miles away from the road and accessible only on foot. The miners use it as an intermediate base between the mine in the crater and the weighing station down the volcano. 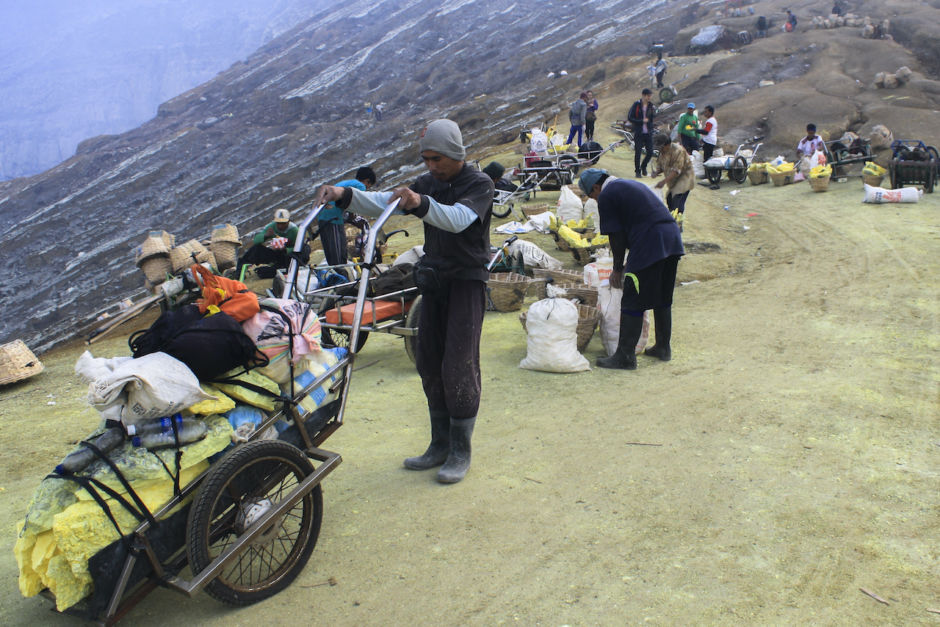 At the end of each day, the miners ready the sulfur for transportation at the base camp on the crater’s ridge. They pack up the freshly collected sulfur on wheelbarrows to transport it two miles down the volcano. They bring the sulfur to a nearby refinery that will pay them by weight.

Parks + Wilderness6 Active Volcanoes You Can Actually Go and See Up Close
Tagged
Culture Galleries Indonesia
What did you think of this story?
Meh
Good
Awesome