There are some pretty iconic and picturesque train journeys out there, including the famous Trans-Siberian, New Zealand’s TranzAlpine Railway, and Australia’s Ghan, but when it comes to UK train travel, it doesn’t get more exciting than the Snowdon Mountain Railway. Whereas other rail journeys can take days or even weeks, the Snowdon Mountain Railway in northwest Wales only spans 4.7 miles and takes two and a half hours. It begins in the village of Llanberis and embarks upon a 3,500-foot climb to the summit of Snowdon — the highest mountain in England and Wales. Twelve million people have traveled this route since 1986 when it first opened, and after 100 years of operation, it still carries over 130,000 passengers annually. Here’s what you can expect when you board the thrilling Snowdon Mountain Railway.

Note that The Snowdon Mountain Railway is closed for the winter but will reopen mid-March, 2019. Tickets for the 2019 season can be booked starting this December and can either be booked in advance or at the ticket office in Llanberis Station. 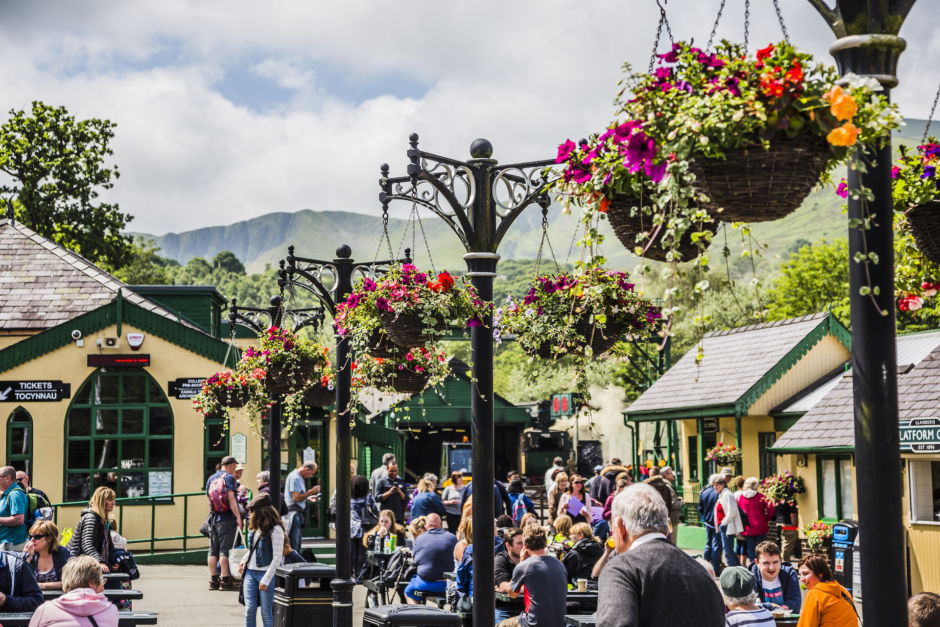 The journey begins in Llanberis, a village of just over 2,000 people at the foot of Snowdon Mountain. A popular destination for outdoor activities, especially mountaineering, mountain biking, and pony trekking, Llanberis is also home to the 13th-century Dolbadarn Castle and Llanberis Path - the longest walking and biking route to the summit of Snowdon. Most famously, Llanberis station is the beginning of the Snowdon Mountain Railway, and the village draws visitors from all over the world eager to get to the top of the peak. (Photo: Snowdon Mountain Railway) 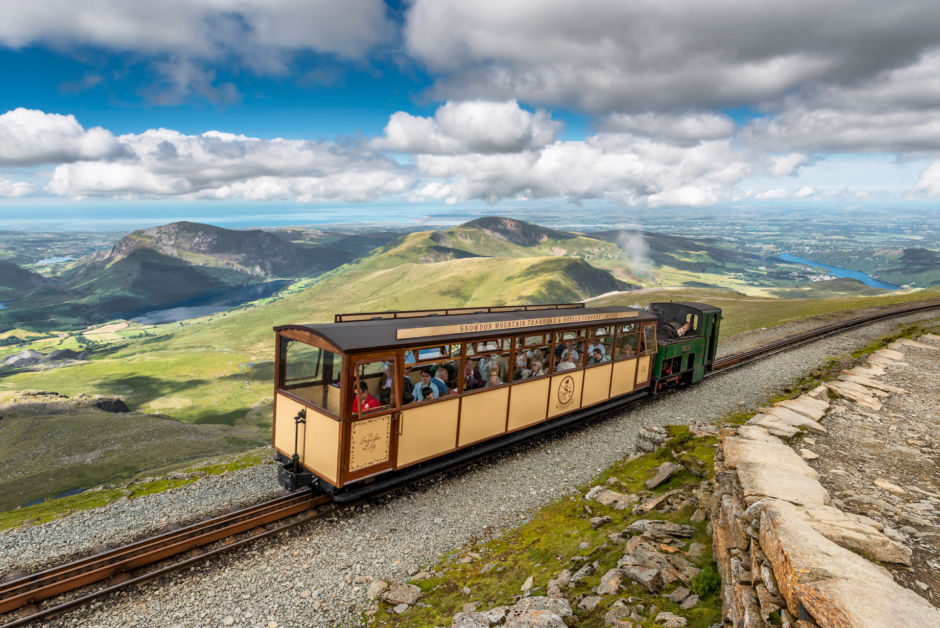 There are a few ways to experience the Snowdon Mountain Railway. The first is aboard the Heritage Steam Express trains, pushed by original Swiss steam locomotives from 1896. The Snowdon Lily and Mountain Goat trains are built on the chassis and bogies from the original 1896 carriages, so modern passengers can enjoy the same traditional ride as those from the late-19th century. With a limited capacity of only 34 passengers, this train is perfect for those who prefer small groups. It departs Llanberis three times a day. (Photo: Snowdon Mountain Railway) 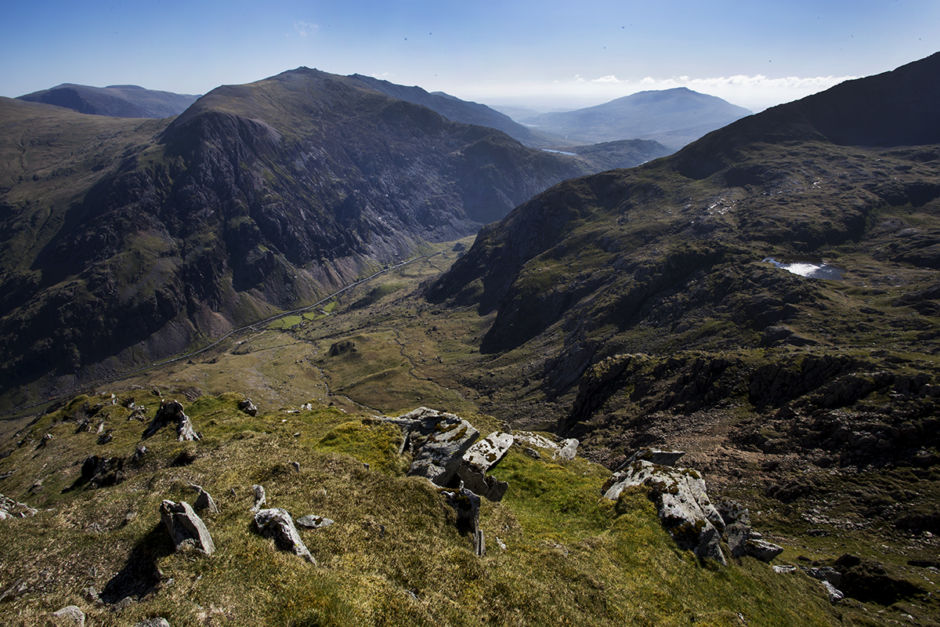 Once you depart Llanberis, the rail crosses a viaduct over the Afon Hwch river, where you’ll be able to watch the Ceunant Mawr waterfall tumbling down into the gorge. As you pass into the vast, open countryside, you’ll catch your first glimpse of the Snowdon Mountain summit, rising above the ridge. Moel Eilio, another peak - named after a fourth-century Irish king - can also be viewed from the pass, with old and abandoned dwellings dotting the surrounding landscape. (Photo: Snowdon Mountain Railway) 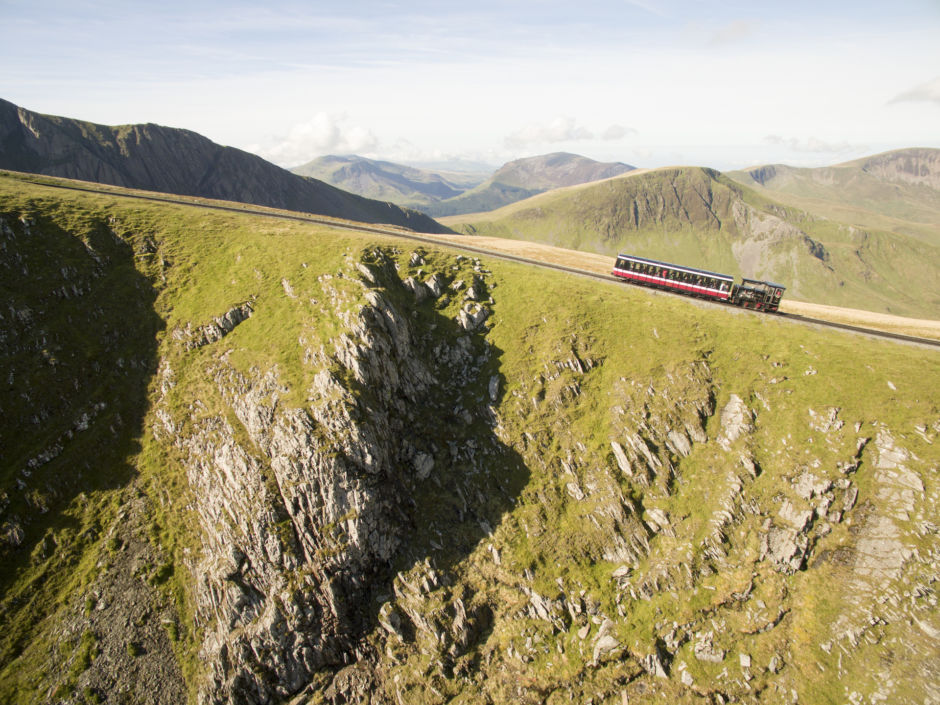 As you pass through Hebron Station, you’ll see a Hebron Chapel built in 1833 by poor families living in the valley who raised enough money to construct a house of worship. Although no longer operational, the chapel’s name is carried on by the station, which has been open as long as the railway itself. You’ll also glimpse a large farm of mysterious origin at the bottom of the Valley of Reeds, which may have once been used as a hunting lodge. (Photo: Snowdon Mountain Railway) 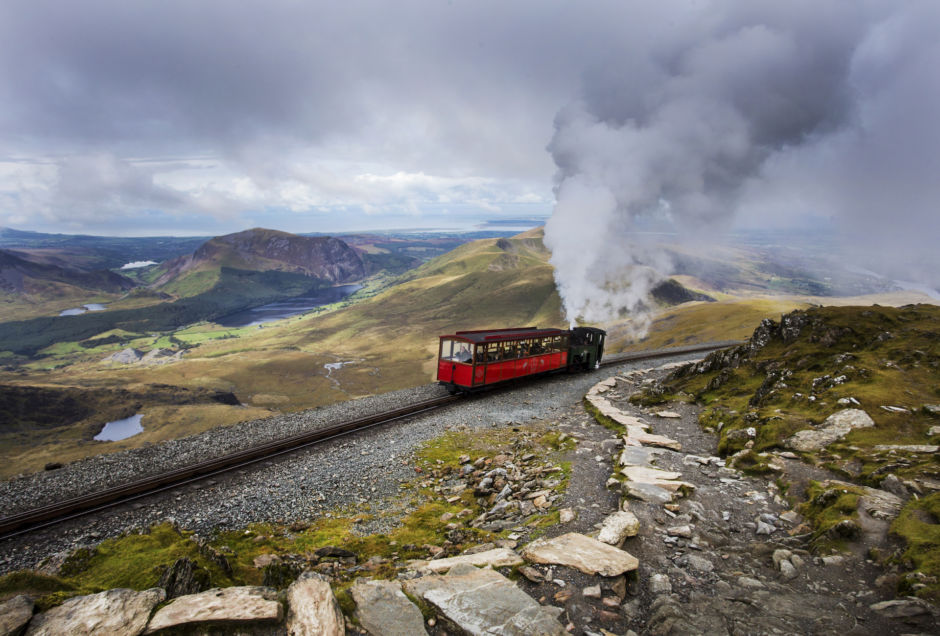 The Hill of the Falcon

Climbing higher through the Snowdon range, you’ll be treated to a sweeping view of Moel Hebog, a towering mountain that dominates the landscape that is the natural habitat of the Peregrine Falcon. Just to the north of Moel Hebog is a cave where, according to popular legend, Owain Glyndwr - leader of the last Welsh rebellion - still waits to rise again and lead his people against the English. (Photo: Snowdon Mountain Railway) 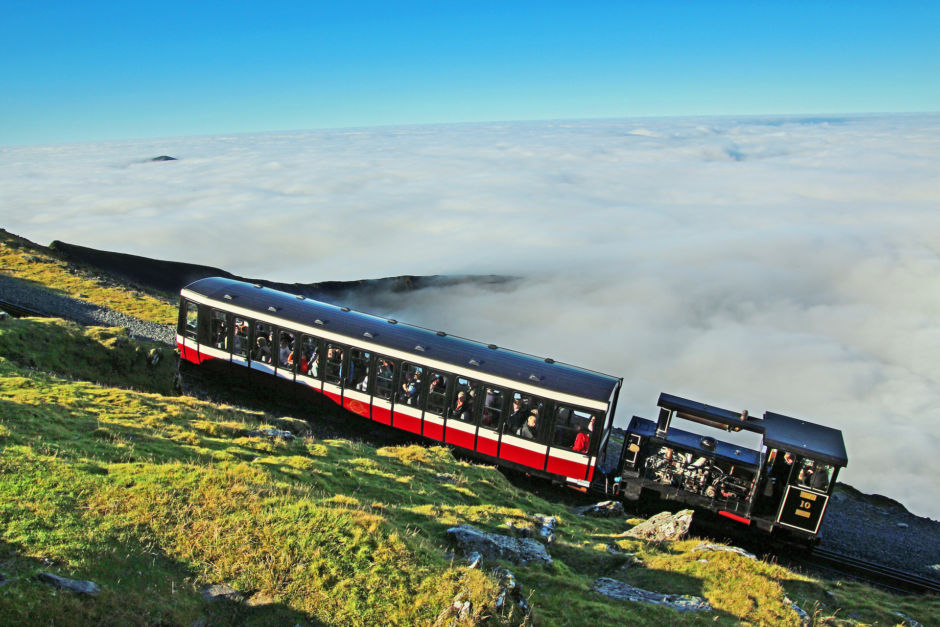 Before it was destroyed in a windstorm, the original halfway hut was known for its delicious lemonade. Now, the station has a cafe and serves as a refueling point before steam engines make the final push to the summit. From here, you can look down on Llanberis Path - maybe even get a sight of some hikers sweating it up - and see the Moel Cynghorion (Mountain of Councillors) rising beside you on the far side of the valley. In the distance, you will also be able to see the volcanic black rock of the Clogwyn du’r Arddu cliff. (Photo: Snowdon Mountain Railway) 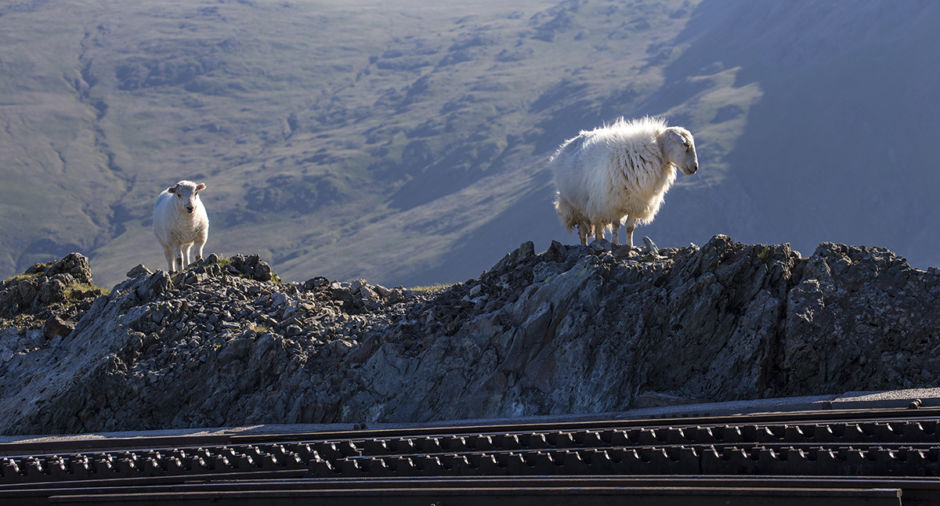 The flora and fauna of Snowdon

Along the way, remember to pay attention to more than just the mountains and valleys. Snowdonia National Park is also home to several species of protected flora, including the Snowdon lily, Alpine meadow-grass, and Alpine saxifrage. It’s also the natural habitat of rare and beautiful animals, such as the Peregrine Falcon, feral goats, otters, polecats, and pine martens. The Snowdon beetle also makes its home in Snowdonia, but there are only 1,000 of them in existence, and you’ll need pretty keen eyes to spot one. (Photo: Snowdon Mountain Railway) 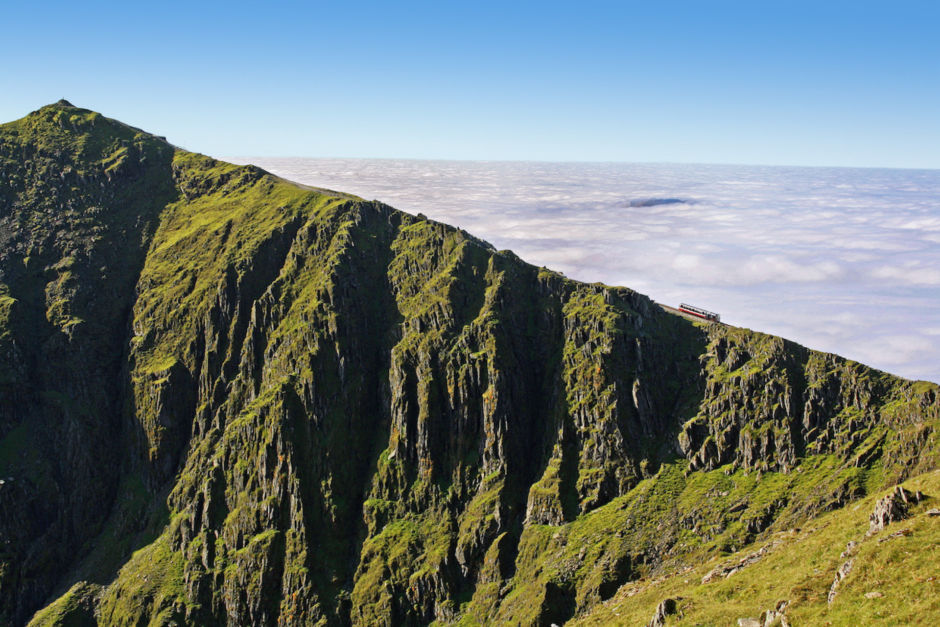 Once you leave Halfway Station, you’ll get your first real sense of exactly how high you’ve climbed. At 2,330 feet, the landscape will have changed from the lush green valley to a more dramatic rocky terrain. You’ll skirt the valley’s sheer, precipitous edge and look down on Llŷn Peninsula and Llanberis Pass, where cars and hikers should appear no larger than moving specks. (Photo: Snowdon Mountain Railway) 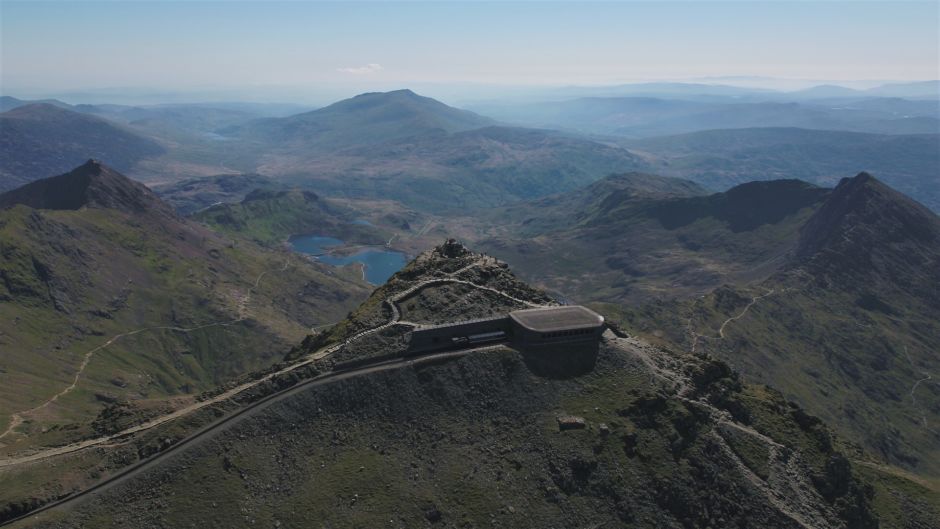 In the early spring, when lingering ice and snow prevent trains from climbing any further, Clogwyn Station is the highest you can go. The station is situated on an exposed ridge with a view of Llanberis Pass below and the Clogwyn Du’r Arddu cliffs. And in case you needed another reminder about the dangers of mountaineering, you’ll be able to see a huge pile of nearby boulders that once tumbled from the overhead cliffs. According to legend, they’re the current home of a witch named Canthrig Bwt, who tries to snatch children climbing on the rocks. (Photo: Snowdon Mountain Railway) 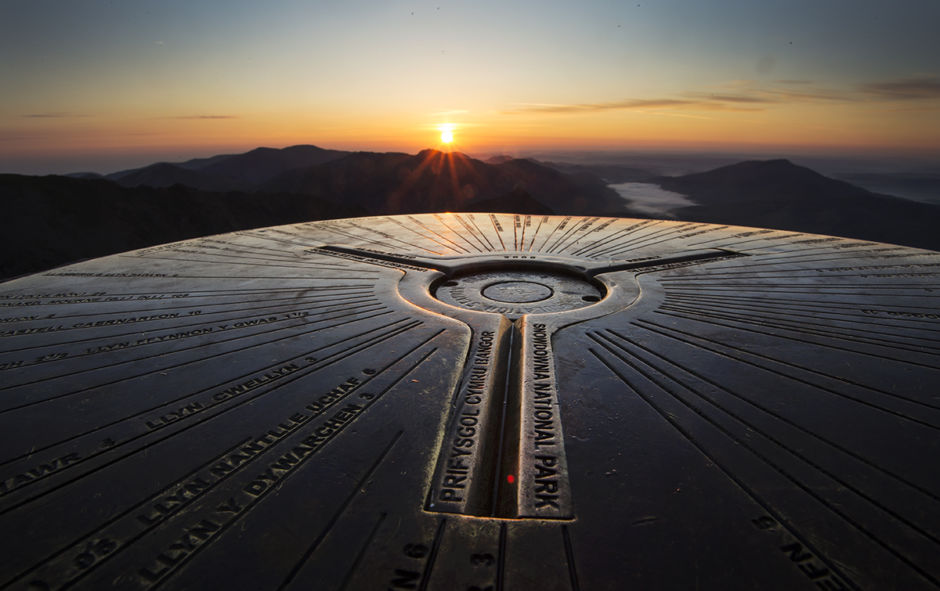 You will have seen some pretty spectacular views along the way, but nothing beats the panorama from the top. From the peak of Snowdon, you’ll enjoy 360-degree views of the valleys below, and if the weather is clear, you might even be able to see as far as Ireland. You can even climb atop the cairn, a pile of stones from which you can get an even more impressive perspective of the surrounding countryside. The summit isn’t completely isolated from humanity, however. It’s home to the Summit Visitor Center, the highest visitor center in the UK. Trains stop here for 30 minutes before starting the return journey - plenty of time to take in the views and enjoy the cafe and gift shop. (Photo: Snowdon Mountain Railway)

Art + ArchitectureThe 11 most beautiful train stations around the world
Tagged
Galleries Train Travel Trip Planning
What did you think of this story?
Meh
Good
Awesome

These Amtrak routes are finally returning to their daily schedules

The EU is giving 60,000 free Interrail passes to young people this year