DIRECTLY BELOW, LONG commuter boats chug down Khlong Saen Saeb, its rancid waters tinted chocolate-brown and reeking with decades of pollution. In the distance, the BTS Skytrain briefly appears from behind a spate of high-rise condominiums, gliding purposefully along the Sukhumvit line before disappearing behind the high-end Siam Paragon shopping mall.

A bare-chested Thai on the roof of the cement-block apartment building next door dangles a cigarette from his mouth as he hangs laundry on clothes lines stretched between rusty metal trellises.

Motorbikers weave their way past pedestrians shuffling through a narrow web of alleyways and side streets that connect Chitlom, New Petchaburi, and Ratchadamri roads. Hives of construction workers dressed in faded jeans, long-sleeve blue shirts, and yellow hard hats are stirring in Pratunam Tower across the street; tall construction cranes speckle the skyline like necks of giraffes.

These pictures of relative tranquility are skewed, distorted, a mirage. In reality, I know the city is already swirling with fevered activity down on its pockmarked sidewalks, which heave, day and night, with the relentless beat of foot traffic. 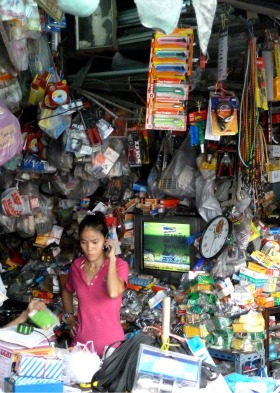 I was away from Bangkok for 18 months, thousands of miles away. The intoxication of these streets became little more than a bittersweet picture book of memories to flip through from the sanitized comfort of a cubicle in New York.

That invigorating sense of time, of place, and of being far, far away that I’d grown so accustomed to during the 8 months I lived and worked in Bangkok was gone. Days bled into weeks into months until, finally, those 18 long months ended when I hugged my cat—okay, smothered her—and walked out the door of my Brooklyn home, bound for JFK and a flight back to Bangkok.

The first few days back were surreal. I scrambled from one condo building to the next, setting up viewing appointments with landlords and realty agents and hoping I wouldn’t have to extend my hotel stay. I returned to old haunts I’d spent so much time idealizing about in New York, and inevitably the happy familiarity—the comfort—of everything around me came rushing back in waves of euphoric, almost unbelievable, remembrance.

The little things and the big things sprung back into high relief again: the smells, the noise, the people, the rhythm of everyday life. The motorbike drivers riding on the sidewalks without anybody batting an eyelash. The tuk-tuk drivers asking me where I was going, if I wanted to go shopping, or if I was hungry for Thai food (no thanks). The labyrinthine food courts, the cold, sweating bottles of Chang from 7-11, the cool whir of the Skytrain, the fruit and vegetable markets squeezed into tiny alleys, the unmistakable blare of Thailand’s infectious phleng phuea chiwit (“songs for life”) music—it all came back. I felt breathless for weeks. 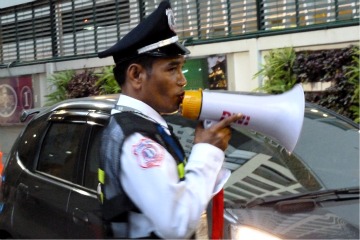 Now, months into my second affair with Bangkok, I’m settled in. As much as I feel the city pulling me out into the streets, I’m chained to my laptop during weekday mornings and afternoons in my apartment on New Petchaburi Road, the one with the heartbreaking views from the balcony, the one that my fiancee and I rent from a family who lives in Chonburi.

As a freelancer and full-time editor, my job in online publishing allows me to work here, a thousand miles away from that cubicle in New York with my nameplate on it, as long as there’s reliable Wi-Fi and, preferably, frigid air-conditioning.

Though quaratined indoors, I never feel too far removed from the seductive madness below. I can hear the khlong boats roaring by, and traffic cops feverishly blowing their high-pitched whistles, as if they were paid by the volume of tweets, directing armies of motorbikes, candy-colored taxis, exhaust-spewing busses, putt-putting tuk-tuks, and honking motorists into reticent, world-class traffic jams that during rush hour stretch for miles.

By 5pm, day yields to early evening in a spectacular show of color, the sun beginning its slow descent and turning hazy sky sublime shades of pink, blue, yellow, and orange. Flocks of sparrows come out for their daily playtime, chasing each other and divebombing over a vacant lot next to the khlong. The boats stop running, traffic subsides, the blinding heat relents. I turn the computer off for awhile, and all seems calm again, but, of course, I know that down on the streets it’s not.

Bangkok never really left me during those 18 months I was away, but it’s good to finally have it back in all of its vivid splendor.

This story is part of Matador Abroad’s Day in the Life of an Expat narrative series. Do you have an expat life story to share? Check out Matador’s contributor guidelines.