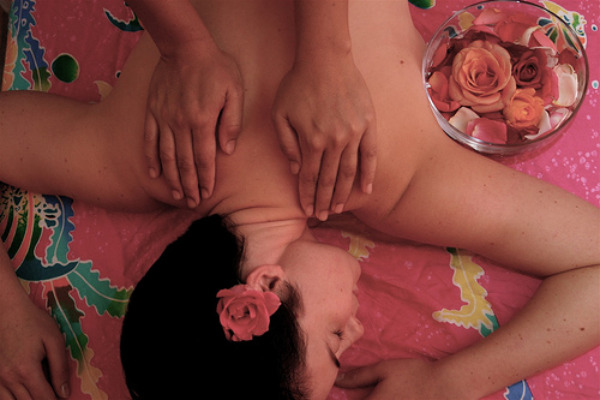 The Chinese ‘steam massage’ doesn’t turn out how Noah Pelletier expected it to.

I was lying face down on the table when my masseuse whispered into my ear, “Hello.” Five minutes into a massage, it seemed like an odd time for a greeting. When I lifted my head, she was pointing to my wife, whose neck was on fire. The flames were not particularly high, but then again, my wife’s neck isn’t very big. But that’s really not the issue when you‘re pulled from what should be a relaxing experience.

In a normal situation, I would have doused her with water to snuff out the flames. However, there wasn’t a faucet in the room, and I hadn’t mapped out a route to the nearest hose. There was also the issue of being completely nude, but I had dropped my shorts for so many masseuses that the rush had long since worn off.

Of course, this situation ⎯ like many I’ve encountered in China ⎯ was not normal. In fact, the experience was a bit surreal, which is probably why I just stared agape until the masseuse smothered the flames. It wasn’t until I put my head back down that it occurred to me: I was next. The masseuse poured something onto my head, and then came the sound of a lighter going click.

This fire business came about because our regular spa, Dragonfly, was booked. My wife and I made the pilgrimage every Friday after work. “Restoring our sanity,” we called it. One of the great things about living in China is that you can get five-star service for a quarter of the price. And, oh, how we needed that ambiance. With its elevated footpaths over babbling fountains, a treatment was no less than a sandalwood scented utopia. 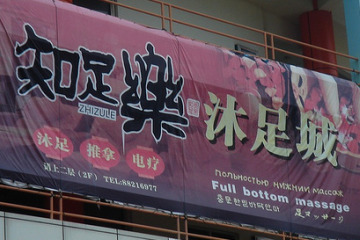 The same boy always guided us to our room, walking backwards and bowing throughout the entire 30-foot walk. I would slip into a pair of loose-fitting pajamas for the an mo ⎯ which means press and stroke ⎯ full body massage. The “stroke” restores vitality, and the “press” is when the masseuse presses on certain points to activate your qi, your life energy. The lights are low and it’s a deep experience.

By the time they massage my head, I’m slipping in and out of consciousness, which is usually accompanied by a spasmodic kick, brought on by that falling sensation. The masseuse chuckles silently, as causing someone to react this way must be a secret perk of the job.

Instead of waiting around Dragonfly for a cancellation, we walked three blocks over to the ingeniously named Massage. You can’t swing a dead cat in Suzhou without hitting one of these clinics. They’re part of Chinese culture. People drop in to restore harmony in the body, the way Americans pull into body shops to have a nail removed from the tire. Call it a Jiffy Lube for the soul.

Naturally, Massage offered massages, but from the picture in the window, they also performed traditional treatments such as cupping, where heated glass cups are applied to the back, creating a vacuum effect that leaves the patient covered with crop circle-shaped hickeys. As we entered, we did not encounter babbling fountains or candles, but rather, clinic-white walls and the sneaking suspicion that someone wanted to stick me with needles.

The girl behind the counter didn’t speak English, but a treatment “menu” was on the wall. She retracted what appeared to be a car antenna and motioned for me to choose. English translations were listed under the Chinese characters, but as we would later learn, these flowery descriptions were not always apt descriptions. 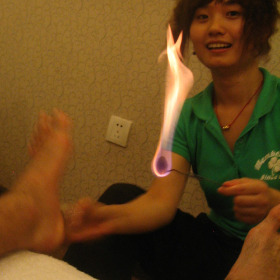 I skipped over BOWEL HARMONY and pointed to something that contained ENLIGHTENED STONES, but the girl steered me from this with a wave of the hand. The same with TAI MASSAGE. This has happened to me in restaurants as well. You point to Gong Bao chicken on the menu, but the waiter just shakes his head because earlier the cook announced that he would cleaver-hack the next person that orders Gong Bao chicken. That’s alright. I’m flexible.

The antenna pointed to STEAM MASSAGE.

The fact that she said this in English should have raised a red flag, but we had no idea what was in store for us. We just said yes and followed her down a dark hallway to a room with two massage tables.

“Please undress,” she said, and then closed the door.

It was shortly afterward that our masseuses came in, and shortly after that that I looked up to see my wife’s flaming neck.

After some urgent pantomiming, my masseuse and I reached an agreement: If the spot that was on fire became too hot, I would howl out and she would extinguish it. Not exactly rocket science, but that‘s what we came up with. She covered my entire body with cellophane wrap, and then placed towels on top of that. When she put the towel over my head, I took a deep breath.

I heard the clanging of a glass jar, followed by a sharp aroma. She poured this alcohol solution on the towel covering my head and then lit it. The fire burned for a few seconds before she smothered the flames with a wet towel and massaged the heated area, hence the steam massage.

The thing about being set on fire is that your body can’t believe this is a conscious decision. Within the first few lights, I noticed by heartbeat accelerate. The masseuse ignited several places on my back, massaging the heated area deeply into my muscles. Tiny alarms went off in my brain, notifying me of heated areas and sending sweat to the rescue. When the entire length of my spine was set ablaze, I heard my wife say “Yeees.”

30 minutes of alternating pleasure and pain followed. The good times were warm, deep massage strokes that loosen muscles I didn’t even know I had. As for the other times, well, I didn’t exactly cry out, but my squirming did allude to a breakdown in our agreement. Amidst my silent curses, the cellophane, I was certain, had fused to my skin. 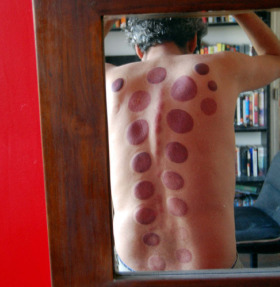 As if reading my mind, the masseuse removed the plastic wrap and towels, and then slathered my body with some sort of cooling lotion. A few areas were tender, and sweat was still beading up. At the end of the massage, she clasped her hands together and bowed, thanking me for my business and, apparently, for allowing her to set me on fire. I thanked her and she hurried out of the room.

“The girl told me to look up and your spine was on fire.”

“Yeah, I know. Your neck was on fire. Check my back for burns.”

We were red all right, but being licked by the occasional flame released a good amount of endorphins. I felt invincible. The girl at the counter offered us both a glass of water before we left, urging us to drink up. Apparently, it wasn’t enough.

When my wife and I crawled out of bed the next morning, we never made it past the couch.

“Get the remote, will ya? My back hurts.”

“I can’t reach it. Besides, you‘re sitting on it.”

That ‘hung over’ feeling we experienced was our internal organs working overtime. The heat from the fire stimulates blood circulation, which carries out toxins released from the muscle tissue.

To put it in non-medical terms: having a ‘steam massage’ was like cranking up the voltage on a HEPA air cleaner in a room with a coal-burning stove. A heating pad might serve the same purpose as the massage, but it would lack that certain primal allure: the satisfaction you get from playing with fire, and coming out ahead.

We felt as good as new, if not better, in a couple of days. That said, would I recommend the steam massage? If I knew then what I know now, I might have just went ahead and chose the bowel harmony . . . On second thought, maybe not. Like easing your way into a hot tub, I’m sure the steam massage becomes easier the more you get used to it. Be that as it may, next time I’ll leave the flames to my wok, and take my massages at the spa where I know I’ll leave well-rested ⎯ not well-done.