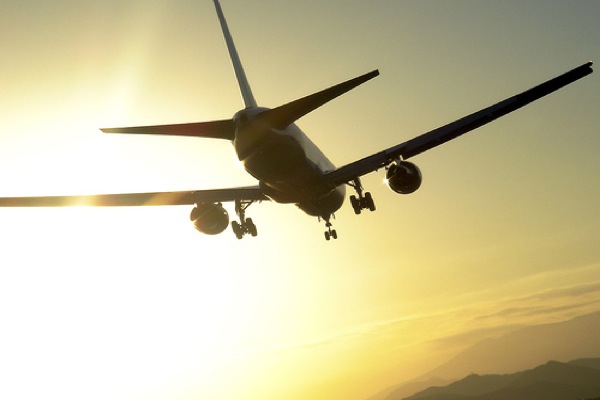 Lance Meade, our swashbuckling, airborne Matadorian, has kindly tackled your questions about the necessary but often terrifying experience of flying.

HERE, LANCE SPREADS his expertise around on everything from volcanic ash to potential hidden make out nooks below the cabin.

Q: I can see how it would be dangerous to fly directly a thick cloud of Eyjafjallajökull, but what is it about volcanic ash specifically that’s so dangerous for planes, even if it’s barely visible in the air?

A:: Volcanic ash is dangerous! It feels soft like talcum powder, but will dull the blades of turbine engines quickly and cause them to fail. Ash cloud will also beat against the windshield causing it to become opaque. Then the engines quit, usually one right after the other. You can’t see the ocean just before ditching. So, yes it can be a bit of a problem.

Q:Do planes really have hidden elevators and stairways like the ones do in the movies? You know – the ones to get down to the cargo hold to defuse the explosive, or the ones to go to the hidden room where flight attends and pilots sleep/make out/do whatever?

A: Some planes such as the 747 do have an elevator. Once in a while Hollywood does a pretty accurate job of showing details of aircraft. One recent movie had a pretty iffy plot intercepting a 747 with a stealth bomber to get a terrorist before he nuked D.C, but pilot aside, the inside detail of the 747 was pretty accurate other than the maneuvering space around cargo and electronics.

Some airplanes have crew rest areas above or below the cabin but I’m pretty sure there isn’t a whole lot of ‘making out’ going on. Crew members usually use their short break for some shut eye. In the old days crew members had a lot more fun!

Q:Wouldn’t it save some people’s lives, or at least give them a better chance at survival than going down in a huge fireball, if there were some way for passengers / crew / pilots / to escape (or be ‘ejected’) via parachutes?

A: Maybe the pilots could ‘punch out’ and leave the rest of you to fend for yourselves. Perhaps they could install escape pods. So far, no realistic application has been proposed, but as Sundance would say, “keep thinkin Butch. That’s what you do best.”

Q: Do you guys and gals always have the landing down stone cold (assuming no gear malfunctions), or are there some where you’re like, shit, we could’ve bounced right off the runway on that one?

A: Actually, just like driving cars, some are good, some less so and once in a while there’s a guy that shouldn’t be on the road. In the airline business the last would be extremely rare. But it doesn’t take much to go from perfect touchdown to ‘holy sh#& batman!’

Q: What would you say are the most coveted routes for pilots worldwide and why?

A: Aah, the dreamy world of free travel to beautiful exotic places. The term “livin the dream”, spoken facetiously, is way overused in my business. Most pilots choose routes for pay and accommodations. Some have friends or activities at the layover. Rarely do pilots covet, say, the Beijing flight so they can visit the Great Wall again and again.

Q: After you touch down on a landing, you hear what (I think) are called the “reverse thrusters.” I know the plane has an insane amount of inertia when it lands and you obviously need the reverse thrusters to slow down/stop, but what the hell is a reverse thruster and if the engines are still spinning in a direction to move the plane forward, how do they all of a sudden spin in the other direction to help you slow down…or is it a separate part of each jet engine?

A: Reverse thrust is used to help slow the airplane on the runway while at high speed. Using reverse causes less break wear which is good, but is never necessary to safely stop the airplane. The brakes alone are required to be good enough to get the job done. Reversers don’t spin the engines backward but turn the exhaust thrust forward using blocker doors and openings in the cowl (engine skin) to allow exhaust to do a quick u-turn as it comes out the back of the engine.

After the blocker doors are in place, the pilot increases power shooting exhaust out the back of the engines which gets redirected forward. It’s not highly effective but does help some, especially at higher speeds.

Q: Please describe just how much control a pilot exercises over, say, landing the plane. I’ve heard that computers do most of the heavy lifting with regard to not just calculating, but also executing on an approach (taking into consideration all of the information available, ie windspeed, etc). Is it really as hands off as it sounds?

A: Ever since the dawn of jet airliners autopilots and integrated navigation systems have carried the “heavy load” for pilots. In fact pilots have become very friendly with these flight deck interlopers naming them “George” and “Fred”.

George keeps the airplane steady and smooth, something that is very touchy and difficult for a pilot to do smoothly at high altitudes. Fred has navigating abilities that keep pilots from landing in Havana when the customers thought they were going to Miami. Now days Fred has triple redundant GPS with added backup to keep us on course within a foot or two all over the world. George and Fred can now even talk to each other.

So far the only mutiny news has been squelched as just rumor. An autopilot can actually land the plane and hold it on the center of the runway, but the pilot workload is actually increased not made easier for that type of landing. Also, there’s no glory in letting George get the landing.

Q:Ever see that movie Fight Club? Is it true what they said that the oxygen is really just given to keep people calm and mellow when/if the plane loses altitude/nosedives?

A: I’m not sure of your Fight Club reference. I promise that we do not mess with customer psyche by doling out oxygen to suit us. At normal cruise, the cabin air is like breathing in Denver (without the smog). If the oxygen masks drop, it’s because the air is now like the top of Vail or higher.

Q: I understand that turbulence isn’t really that dangerous, but it’s hard not to feel alarmed when the plane is bouncing around all over the place. Can you explain exactly what’s happening when the plane flies through an area of turbulence and why it’s not as risky as it feels?

A: Turbulence isn’t dangerous unless it’s extreme, so try the best you can to stay relaxed when it gets rough on your plane. The best answer I can give you about turbulence is an analogy, not scientific, and its similarity to riding in a boat. On smooth water the boat ride is like sweeping across glass.

But as the water gets choppy, the ride can be very bouncy. Still safe but not so comfortable. From the shore you see the chop and say to your friend with a boat, “thanks, but maybe some other time”. Air is very similar to water, though not as dense, and you can’t see the chop. There you are, stuck in an airplane wishing you were on shore. No danger, but no fun either. The biggest danger for us is the ‘puke factor’. One person gets sick, then others smell it and they get sick, etc…

And that’s all for Round 1 of Ask A Pilot, folks – ask your questions in the comments below and Lance will select a handful to answer next Monday.