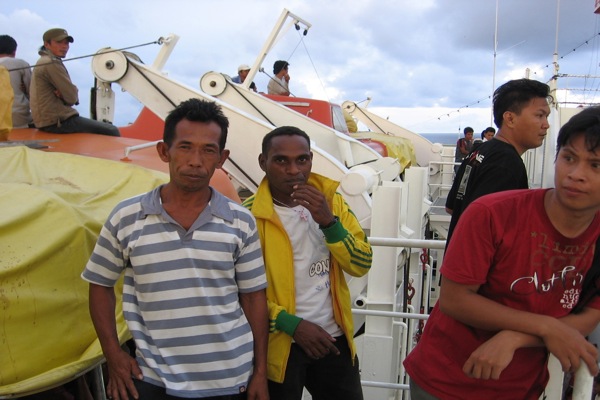 Traveling on a shoestring gave this traveler a sharp sense of life in Indonesia.

How on Earth did I get here?

The cramped lifeboat, rigged twenty feet above the ship’s main deck, swayed in the afternoon storm.

I had been sandwiched between two families outside when the downpour began. Now, having followed a band of Indonesians up a ladder into the covered lifeboat, I hunched over, trying to calm my stomach as they sang a local pop song led by a badly tuned guitar.

When they finished, the guitarist, a wiry man named Agus, looked over at me and smiled. “You scared?” he asked in English, and the rest of his friends howled with laughter. I tried to laugh with them, but all I could think was: How on earth did I get here? 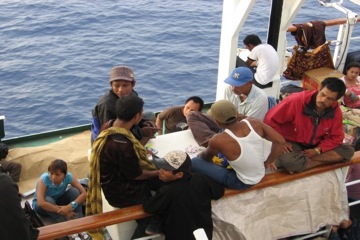 Windows Into a Culture

Pelni, Indonesia’s government-run ocean liner, had shown up a day late to its destination, leaving throngs of us to a humid night in Bitung’s port.

When it finally arrived the next morning, it took the better part of the day to board its eager passengers—men carrying 50 pound bags of rice on their backs, women lugging crates of goods for export, families laden with children and prayer rugs, all of them pushing against the frenzied tide of passengers trying to disembark.

I could have taken a short plane ride from Sulawesi to Ternate, but I was on a tight budget. And though cheap transport in a developing nation can be uncomfortable, even harrowing, often, the cheaper it is, the stranger and richer the experience. As Rolf Potts puts it, “traveling on the cheap can offer you windows into a culture that go beyond the caricatured stereotype of what a place is supposed to be like.”

During their exploration of Indonesia in the 1970’s, the Blair Brothers spent each night of a 2,000-mile journey in coffin-sized, cockroach-infested spaces below deck of a traditional boat. Their reward? A once in a lifetime adventure with the legendary seafarers of the Bugi tribe.

The Pelni ride in economy class couldn’t match the Blair Brothers’ experience, I knew, but I had a feeling it would give me a realer sense of Indonesia than a plane ride most of its population could never afford. 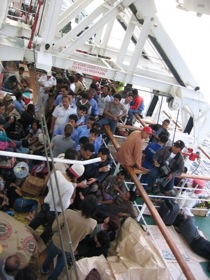 There are certain travel experiences, however, that life back home can never prepare you for. Once I’d made it onto the liner—a mission that lasted two determined hours— I was hit with a wall of cigarette smoke, the stench of food gone bad, and the worst travel conditions I had ever seen.

As the stream of the incoming crowd forced me along, I stared at the absurd amount of passengers stuffed into the first compartment of economy. I’ll find a cot in the next room, I thought.

But every room was the same. The cots— vinyl cushions laid out on metal platforms—were all taken, single cushions staked out by entire families. Old men squatted on the cement floor; kids perched themselves on bags of rice, blocking the entryways to flooded bathrooms.

Televisions blared Muslim sitcoms and government propaganda. The heat was unbearable, each room its own kind of cramped village. And they were endless.

“They don’t care about us: they treat us like animals.”

Pelni’s website boasts that “staying in cabin class is as comfortable as a luxurious hotel.” However, as most Indonesians can’t afford that experience, the private cabins are few.

The web site goes on: “sailing is so smooth, one hardly feels a difference to being on land.” That, too, must be a luxury reserved for the cabin class, because the three levels of economy were so far below deck that its passengers might as well have been inside the liner’s rumbling engine.

“Indonesia’s government— it’s inhumane,” Agus, said, motioning his cigarette towards the main deck below us, where hundreds of people crouched in the rain. “They don’t care about us; they treat us like animals.”

In a country as timid as Indonesia, these words were biting ones. After three months of travel throughout the archipelago, I’d never heard the question of humanity mentioned. Most Indonesians carried a hard-earned reticence, in part left over from the days of Suharto’s oppressive rule.

I could see what he meant. I hadn’t found a cot down in economy; in fact, I hadn’t found any space at all. The stairs leading to each level of the ship were a maze of passengers, each landing more impossible to maneuver. The main deck outside looked like a refugee camp, hundreds of families huddled on tarps, men balanced on the ship’s railings playing cards, boys laid out on beams above, baking in the heat.

The most impressive were the elderly, sitting like little Buddhas, patient and serene. Many of these people, Agus told me, were looking for temporary work, others exporting goods. Some of them had been traveling like this for days, even weeks. Agus himself had another four days before he reached Papua to find logging work.

I gazed out through the hard rain at the passengers below. Did they, too, feel abandoned by their government? For me, this was a twelve-hour ride. I could get off this boat and never come back. I could fly out of this country, fly away over its lush volcanoes, its ocean-side villages where floods took homes, and fevers took children, and return to an air-conditioned, carpeted world.

I felt guilty at that moment—not because I had found shelter from the storm, but because for me, and perhaps only me, the storm was a passing one. 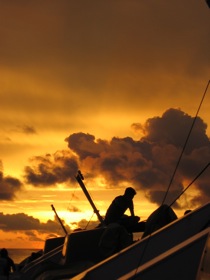 The sunset burned red, filling the sky with its last light. I had surrendered to our precarious shelter, sending my new friends into fits of laughter with my imitations of Sulawesi slang. Now, the storm over, we stood atop the lifeboat. The island of Ternate had finally come within view.

“Photo?” Agus said, pointing to the camera in my pocket. I took it out and snapped a shot of the smiling group. “Thank you,” he smiled, not caring that he’d never see it.

“Terima Kasi,” I said back in Bahasa Indonesia, wishing I had more words to explain. As travelers, we are often drawn to unfamiliar experiences because they open something in us, free us to be stronger, wiser versions of ourselves.

But it was the locals’ grace and humility, not my own, that gave me that freedom. And they learned it from the hardship I only briefly encountered.

Tagged
Travel Indonesia
What did you think of this story?
Meh
Good
Awesome