Imagine a national campaign in your country that uses a homophobic epithet to drive its point home. Chile’s SERNAM (Servicio Nacional de la Mujer), an agency whose goals include protecting women in the country, last year launched an anti-domestic violence campaign which centers on the use of a homophobic slur. Since last year, it has proclaimed boldly on television and billboards, “A maricón is he who mistreats a woman.”

And while calling people who mistreat women ugly names is somewhat understandable, I just can’t get past the word “maricón.” 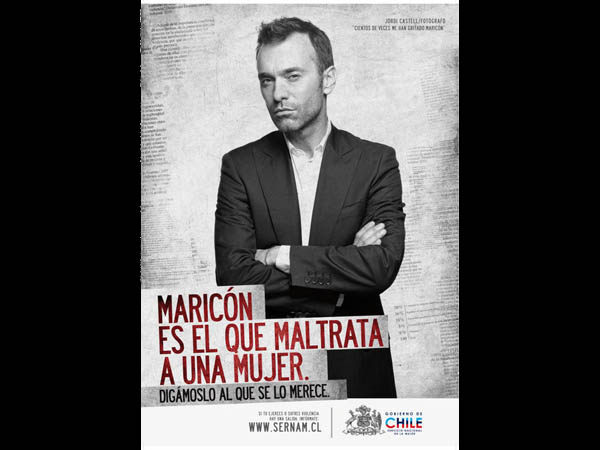 Maricón, you see, is a hateful word against gay men. Bluntly put, it’s “fag” in Spanish. Here in Chile we don’t even call ladybugs by the name I learned in high school (mariquita), because it sounds like maricón. Just the other day I saw someone pick up a rounded musical instrument on a stick in an import store. “Jajaja,” she said, laughing “es una maraca” (it’s a maraca). Another word that people laugh when they say it because it’s an insult to gay men. And now this.

The second version of the campaign (nicknamed “maricón, 2.0“) uses the word again, this time encouraging people to denounce violence against women. It too features Jordi Castell, a minor star in the Chilean social pages, who is gay. And while SERNAM says their campaign has been effective, with higher reporting of what is called here “violencia intrafamiliar,” the use of a word I associate with homophobic violence against gay men does not in my mind equal lessened instances of violence in general (or within families). I just don’t understand how any campaign against domestic violence can use hateful words. 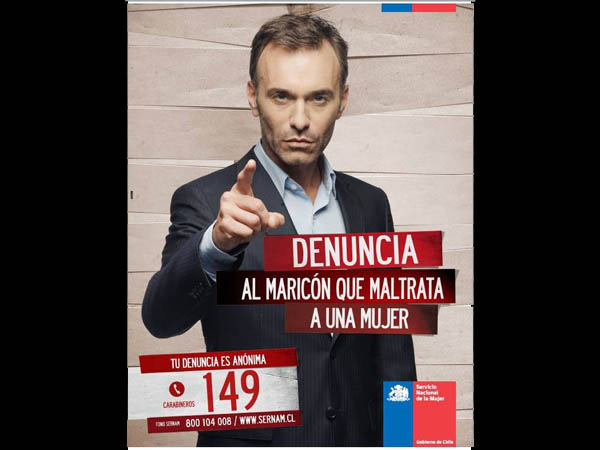 So what of this poster? I have been assured by many straight Chileans that calling someone a maricón is not actually saying they’re gay. It’s saying they’re an asshole, despicable, a liar.

Somehow this fails to allay my discomfort. Why should the association of a word used to refer to gay men with hateful, horrible, behavior make me feel any better about the use of the word? This is not a linguistic problem. I have lived here for seven years, and know my way around chilensis, as we call the Spanish spoken here.

So is it a cultural roadblock? Gay friends here agree that the campaign is hateful, and look across the Andes to Argentina, where same-sex marriage is legal, and where I took the feature photo of a wall in culturally conservative Mendoza that proclaims “Queer Power.”