[Editor’s Note: Megan Wood is the first writer-in-residence to participate in the Road Warrior program, a partnership between MatadorU and the Belize Tourism Board. Megan is spending the spring in Belize, documenting traditions of the country’s diverse cultural groups. Each week, she reports on her experiences for Matador, her personal blog, and for other outlets.]

“YES BABES! Shake your waist!” Miss Valencia instructs me, yelling to be heard over the Punta Rock music blaring from the stereo. She wipes the sweat trickling out from under her bright head scarf with a handkerchief and lets out a laugh.“You got the steps, girl!”

I don’t like to dance: I am too tall and too shy. I didn’t even dance at my own wedding, but I am willing to do anything to learn more about the Garifuna culture in Belize. As a culture blogger, it’s my job to spend time with Belizeans of different heritages and write about what I learn. The Maya have been happy to show me how to grind corn and make tortillas. The Creole have laughed with me while I try to speak Kriole. The Mestizos have invited me to a wedding. Even the closed community of Mennonites were willing to have lunch with me and answer my long list of questions. But the Garifuna? The Garifuna have been resistant to allowing a stranger into their proud culture. 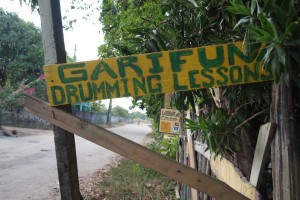 Not that I haven’t tried. I arranged an interview with a Garifuna historian in the coastal village of Hopkins, hoping to learn more about the incredible Garifuna history. I wanted to find out more about how shipwrecked Africans on their way to the Americas for a lifetime of enslavement, ended up starting a new life, language, and tribe by intermarrying with native Caribs. The Garifuna tribe lived off the ocean and fought against the French. Eventually, the Garifuna were allowed to settle freely in northern Central America where they built fishing villages and were generally feared.

This historian wasn’t so interested in answering my questions about funeral drumming and traditional music. Instead, he wanted to watch Chris Matthew’s Hardball in his living room and tell me which American foreign policies he didn’t agree with – most of them, it turns out. I made the mistake of asking him, “Who first enslaved the Garifuna people?”

“No one! Who tell you that?! Anyone who tell you the Garifuna were slaves is lying. We are warriors, not slaves!” His anger scared me more than Chris Matthews.

She spent half an hour drinking rum and the other hour telling me I had to choose between good and evil.

Still, I kept trying. I offered lunch to a Garifuna dive instructor. He gave me a hard look, “I don’t eat food made by strangers.”

The Belize Tourism Board hired a woman from Dangriga to tell me Garifuna folktales. She spent half an hour drinking rum and the other hour telling me I had to choose between good and evil, emphasizing that there is no difference between black skin and white skin except pigment. Eventually, she told me one folktale, but her speech was so slurred I couldn’t understand her and was too bewildered to ask for clarification.

Though I was able to eat Garifuna food: hudutu, a stew wish fish and coconut milk, and tikin, sweet plantains, I decided to give Garifuna culture a rest for awhile.

When I was informed I’d be taking a Garifuna dance lesson, I gulped. 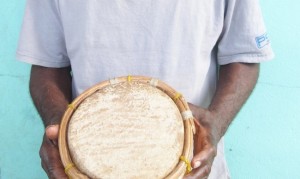 Miss Valencia Palacio arrives at the apartment where I am staying in Placencia. “So, you want to learn some steps?” she asks me.

“I want to try,” I answer, hesitantly. We confer over furniture arrangement and music, and make small talk about the heat. Then it is time to dance; there is no avoiding it.

“Just follow me, I’ll go slow,” she starts, lifting her arms up to chest level and bending her elbows. She begins to shuffle her bare feet across the tile, each toe adorned with a toe ring.

I have no choice but to stand next to her and follow, feeling awkward and worrying about unintentionally insulting her. “Shake the hips, girl! That’s right!” She’s smiling! A small smile creeps over my lips: I am having fun too. The steps themselves aren’t difficult, but letting go of my inhibitions and hips is. As the music picks up speed, Miss Valencia cheers me on, grabbing my hands and twirling me.

“Now I’ll teach you something, babes,” she whispers in my ear. Her feet moving fast, she dances up close behind me until her hips are pressed against my back, and lifts one leg suggestively around my right hip. I burst out laughing, shocked. She lets out a peal of laughter and runs to the door clapping her hands and says, “That step is for your boyfriend!”

My lesson is over. I think about taking out my notebook and asking Miss Valencia about the history of dance in the Garifuna culture, but I decide not to.

If you want to try Garifuna dance, email or call Splash Dive Shop in Placencia Belize. It’s primarily a dive shop, but the company is expanding to cultural tours and tourist information services.

Tagged
Travel Belize
What did you think of this story?
Meh
Good
Awesome