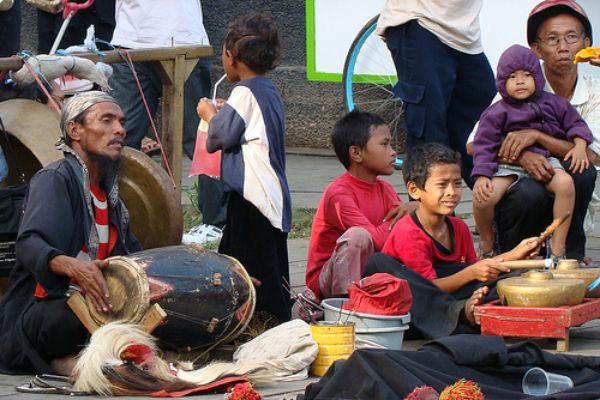 “Learn Indonesian? What for?

THE ONLY WORDS you need to know are terus, berhenti and putar balik. Continue, stop, and turn around,” said my expat colleagues between snickers and high fives. “You know, for the taxi drivers.”

I could have lived in the expat bubble by eating in restaurants, hiring an English-speaking maid and hanging out with ‘my’ kind, but I wanted to be able to eat at roadside stalls and order without pointing. I wanted to have conversations with taxi drivers beyond “continue, stop, turn around.” I wanted to understand the jokes my Indonesian colleagues forwarded to each other, and I wanted to be able to speak to a certain cute girl in customer service.

When I first went to Indonesia in mid 2005, I had not expected to need (far less to want) to learn the local language. Like many Indians, I had been brought up to believe that all “educated” people speak English. The only other country I had visited previously was Malaysia, where English enjoys a similar status.

It was hard for me to imagine someone with a university education unable to speak English and to not be ashamed of the fact. I was surprised to walk into fancy restaurants and top hotels and to not be addressed in English. This reduced status of English was new and fascinating; my understanding of the world had taken a severe wallop.

I bought a couple of Bahasa books and found some online vocabulary and grammar exercises. My first goal was to learn the numbers, ask the cost of things, understand the response and pay the right amount. 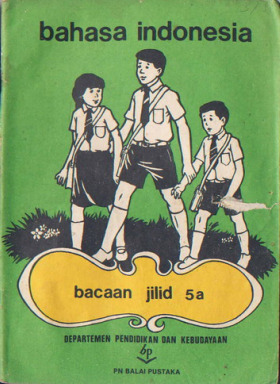 I met this goal quickly, and I thought, “This language is easy! There are no verb tenses, no strict rules on word order and not even plurals.” In most cases you just repeat the word and it becomes a plural. Slowly I learned enough to try and talk about inane stuff with my co-workers, and avoid ordering genteng (roof tiles) instead of kentang (potatoes) at a restaurant.

I was arrogant and (probably) insufferable, and thought myself better than my expat colleagues for making an effort. I boasted about having “learned” the language in two months. I would pre-plan conversations and prepare sentences beforehand to show off my Bahasa skills. Things went fine for a while, but pre-planned conversations can only go so far. Indonesians have no qualms bursting out in laughter when a foreigner makes a mistake in Bahasa. I reached a point where I could communicate in many everyday situations, but I couldn’t make out a single word when people spoke to each other in Indonesian.

The truth became clear to me when one day, after I had had enough of the laughter and bit back, one of my local friends quipped, “I’m sorry, but you sound too much like an airport announcement.”

“Or a newsreader,” another chimed in.

I had always assumed that I couldn’t understand Indonesians because they spoke faster when speaking to each other, but that was not the case. A German intern who had moved to Indonesia after four semesters of studying the language back home explained to me that difference between textbook Indonesian and colloquial Indonesian is massive.

Speakers add suffixes, drop suffixes, and use words not found in a dictionary. Words are often shortened, sudah becomes udah or even just dah, and the word lagi is used in a hundred different contexts. Anda, kamu, lu, bapak, ibu, mas, mbak, saudara and kau are all different forms of the pronoun “you,” yet while anda is supposed to be acceptable in all situations you will rarely hear it spoken between two Indonesians in an everyday conversation.

Indonesian turned out to be a lot more complicated than I originally thought.

I gave up on my language study books and started reading Indonesian blogs, tuned in to the trendy FM stations and filled my MP3 player with Indonesian songs. While I couldn’t tear myself away from my favorite English TV shows, I started watching Indonesian shows every now and then. I wasn’t making any tangible progress, but I felt I was doing my best to “immerse” myself. 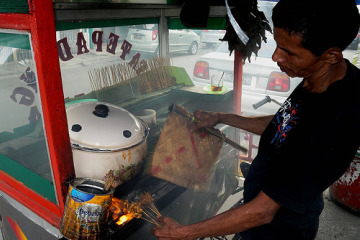 Things started changing when one of my colleagues invited me to be the fourth player in a doubles tennis match. He was the quiet guy at work and I never expected to have much contact with him out of the office, but he turned out to be a very knowledgeable and encouraging guy with the patience of a mountain and opinions on everything. He was also like a human auto-complete. While I struggled for the right word, he’d come up with suggestions that sometimes fit, and sometimes led me to form ridiculous sentences that sounded correct but ended up meaning something I hadn’t even remotely intended. Either way, I was learning.

Earlier the same month I was introduced to a law student who had no patience for English. We got along immediately, but communication between us was painfully slow and full of misunderstandings. Nevertheless, I was determined to communicate in Bahasa. Sometimes I’d have to break off mid-sentence to look up a word in a dictionary. Progress was rapid, though and within a few weeks I needed the dictionary less frequently during our conversations.

By using the language with friends and colleagues, I was making rapid progress, and after a while I didn’t even realize how far I had come. One day I went over to a friend’s place and a show called “Empat Mata” (Four Eyes) was on. I was able to understand a lot, and I even got some of the jokes.

By 2007, life had settled into a routine and I was itching for more. I wanted to expand my social circle and learn something new. I searched for a class that was close to home and had convenient timings. I found a French class. I was quite confident in Indonesian, but learning a new language through one that I had just learned seemed a bit intimidating. Feeling both nervousness and excitement, I signed up. It would be the ultimate test!

When I walked into the institute the evening of the first class, my would-be classmates were all gathered in the café outside the classroom, getting to know each other. There was one other foreigner, an Italian who worked for the UN and wanted to prepare for his next assignment in Geneva. We were all talking in Indonesian, and he was mentioning how impressed he was with Jakarta’s skyline. The word for skyline, however, escaped him, and he looked around for help. None was forthcoming.

I beamed. I knew then that I would get by.

Do you have a story to share about learning a language? Check out our Call for Submissions: How You Learned a Language

What did you think of this article?
Meh
Good
Awesome
Bookmark
Posted In
Travel
Destinations
Indonesia

Going Om: Shrines, shamans, and the lack of sarcasm in Bali

Looking for the world’s most elusive wild cats in Borneo

The Komodo island closure has been canceled