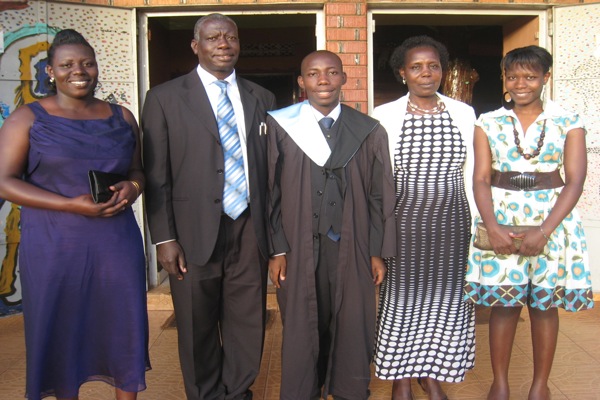 “Humans learn. That is what we do. It is part of who we are.”

Masaba’s father, a slow-speaking pillar of a man, stood before us next to a pole flashing with Christmas lights. With red, green, orange, and blue light splashing across his face, he said, “If you cease to learn, you perish.”

Silence had settled over the room like a morning fog, and this statement seemed to echo. Anywhere else, a sentence like this could be mistaken for hyperbole; here in Uganda, a place where education directly determines one’s access to employment and quality healthcare, it served as an ominous warning: Learn or lose.

Masaba, my co-worker, had just received his post-graduate diploma, marking the completion of the first year of a two-year masters program. Thirty of us had gathered at a local restaurant to celebrate the achievement. For a few hours we ate, danced, and listened as people gave heartfelt speeches. Most speeches focused not only on Masaba’s tenacity, but also on the importance of education.

Listening to people describe the way Masaba latched onto education, using it to pull himself up to where he is today, I couldn’t help but think about how I took school for granted while growing up. If learning is living, was I half-dead in college?

Once exams were finished, as campus emptied and slipped into its quiet summer hibernation, I did what most American students do after leaving their universities for the last time: I had dozens of people over to my parent’s house for a graduation party. I think I gave a three-minute thank you speech to my folks, but for the most part, the night revolved around food and socializing, around reveling in the present. Graduation in northern Uganda is a different affair.

For starters, a proper graduation party is only thrown for college graduates; one of my co-workers said it best: “When you finish high school here, you have only made it half-way.”

Finishing college, for many, is something that requires such extreme levels of personal and familial sacrifice that a cathartic party is almost a necessity. 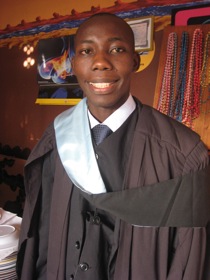 Most universities charge fees that are well beyond what any family of farmers or laborers (ie. most families in Uganda) can comfortably pay. As such, many college students in Uganda are so broke from paying school fees that they eat one meal or less a day to save money—the common expression ‘having a university figure’ comes from this scenario. Parents, too, will often starve themselves of meals to avoid spending their child’s potential tuition funds.

The Acholi, the most populous tribe in Gulu district where I live, see college graduation as an event that is as important for a student’s parents as it is for the student. Graduation is an affirmation of parental prowess, a public declaration that parents have accomplished their responsibilities and primed their kids for life.

Students, too, don’t take graduation lightly, for it changes the way their communities see them. A Ugandan friend of mine said, “After graduation, members of your clan will look at you as an achiever. They will want to be associated with you. In clans where not many people have gone to university, you will be seen as one of your clan’s problem-solvers.”

The party itself can take one of two forms: a Western-style party with a DJ, rented sound system, and catered food, or a traditional party with Acholi dancing and a home cooked feast. With each passing year, fewer and fewer graduates are opting to dance the bwola and the dingi-dingi at their parties, replacing the sounds of the adungu, lukema, and the nanga with the pounding bass of Ugandan club hits.

“When Masaba used to bring home his grades at the end of term, I’d look at the high marks—he always scored well—and I would say, ‘Son, these are good, but good is not great.’ ” His father cracked a smile. With the sting of these moments long buried in memory, Masaba too let a small smile slip.

His father continued. “And so today, Masaba, as we gather to congratulate you on your most recent accomplishment, I want to remind of you one thing.” He paused and turned to grin at his son. We all started laughing, knowing what was coming.

“As nice as this degree is, as hard as you have worked, know that this is not the end–there are more degrees to get. Good, remember, is not great.”

Tagged
Travel Uganda
What did you think of this story?
Meh
Good
Awesome