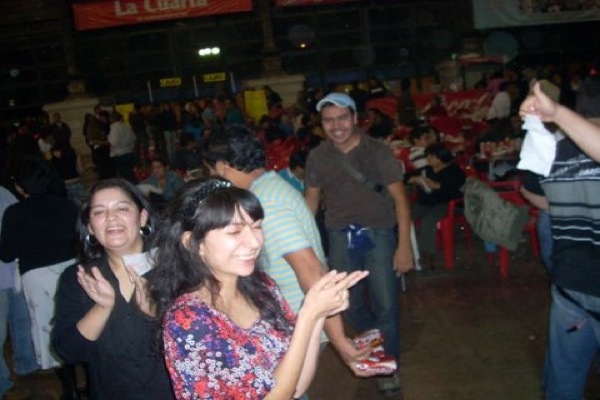 When most people think of dances from Latin America, visions of tango and salsa come to mind. While living in Santiago de Chile, I learned that these are not the only two options. While those styles of dance are quite popular in South America, the skinny Andean nation prides itself on another less-known, traditional dance called cueca.

Along with Chile’s great wine and talented poets, the cueca is an integral part of the cultural heritage. Every Chilean dances or has danced cueca at least once in their lives. It is done at weddings, parties, and family gatherings, and it is even taught to kids in elementary school. 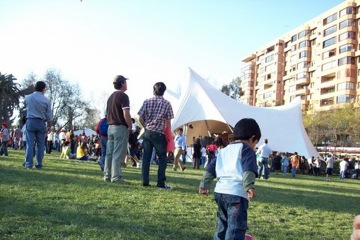 Though it may not have the international status of other dances from Latin America, Chileans consider the cueca a great source of national pride. 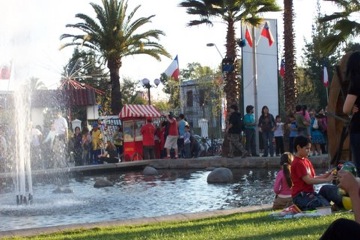 And when it comes to celebrating the national Independence Day, Chileans know how to party. Officially the 18th is two-day celebration, but it is often unofficially stretched out for an entire week. During this time in Santiago and all over the country, parties large and small pop up in the form of “fondas”, temporary locations where people go to eat, drink, dance and be merry.

Last year on the 18th of September, I found myself at Parque O’Higgins, the largest park in Santiago, where numerous fondas had been set up, including “Viva Chile!”, the official fonda of the city municipality. Each fonda was set up with its own food area, bar, dance floor and bands. 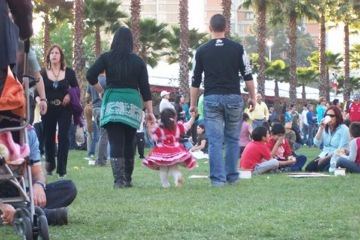 Imagine 20 different parties celebrating in one location, some geared towards families, other towards younger people, all in the name of the glorious motherland.

Upon walking into the crowded park I doubted that any of my experiences in Chile would ever be as “Chilean” as this. The air was filled with smoke from the barbeques cooking up choripan (sausage on bread) and anticucho (spears of shish-kebab), the sound of music could be heard from all parts, people in traditional clothing were proudly showing off their costumes and make-shift stages were filled with cueca competitions and performances. 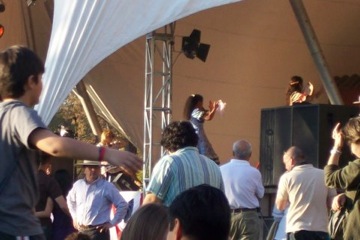 A few friends and I were sitting around a table watching the festivities while drinking copious amounts of chicha and pisco (two traditional Chilean alcoholic beverages both made from grapes), when my Chilean friend suddenly grabbed my arm and announced that he would teach me to dance cueca. Intimidated by the seasoned cueca pros around me, I shook my head and tried as hard as I could to resist.

But alas, the rhythm of the music got to me so I accepted his invitation and stepped onto the dance floor praying that I wasn’t going to embarrass myself. Someone handed me a white handkerchief and it began.

Humble yet subtly flirtatious, the cueca is intended to portray the mating rituals of a chicken and a rooster. Dancers in pairs wave handkerchiefs above their heads, which are meant to signify bird feathers or the rooster’s comb, and move around each other in circles. There isn’t much touching going on and all of the flirting is done with body movement, facial expressions and eye contact.

I followed my partner and tried to copy the other ladies around me who were glancing at me every so often with encouraging smiles. For the first few moments I felt terribly self conscious and awkward. But then as band played another song, I actually found myself getting into the rhythm and really enjoying myself.

I’m sure my cueca was terrible, but I afterward I loved doing it. For those few songs that I danced to, I felt like I was sharing something very important with Chileans all over the country. When you dance cueca, it doesn’t matter if you’re young or old, rich or poor, from northern, central or southern Chile. All that matters is that you’re Chilean, you love your country and you cueca proudly to show it.

Got Chile on the brain? Check out 10 reasons to base your study abroad experience in Chile. Or have a look at what people are listening to in Chile and 8 natural wonders of Chile. And don’t forget about Chile’s best coastal towns.

What did you think of this article?
Meh
Good
Awesome
Bookmark
Posted In
Travel
Destinations
Chile