A trek in rural Laos provides space to reflect on American busy-ness.

My journey for peacefulness began when I met Nick, early Friday morning on a dirt path outside the travel lodge.

He stood alongside the tuk tuk, quietly chatting with three other guides who would accompany us on our two day trek through the Tham Panchan cave in central Laos. Wearing a neon t-shirt, board shorts, and a leather cap he looked like a nineteen-year-old Lao version of Paul McCartney. 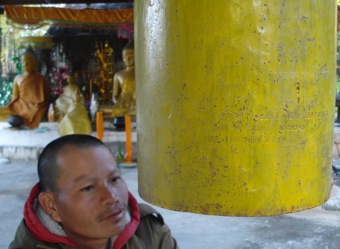 A bombshell is used as a prayer bell at a temple in Laos.

About an hour later we walked on a narrow dirt path, passing through jungle and open fields toward an expansive horizon serrated by magnificent limestone formations.

It did not take long for conversations to sprout and soon our American voices were noisy enough to drone out even the ubiquitous, high-pitched whine of the cicadas.

I walked alongside Nick and practiced a little bit of Lao as he fluently spoke English.

He occasionally pointed out which trees, flowers, and insects were poisonous, but mostly we spoke about our families: what our parents do for a living (“Po het nyang?”) and the ages of our siblings (“Lao annu jack bee?”).

After my repertoire of conversational Lao was exhausted our conversation turned to Nick’s Buddhist faith.

“It is all about peacefulness,” he told me.

“Every day, when I wake up in the morning and before I go to bed at night, I focus on my breathing for fifteen minutes. This makes me peaceful.”

I have attempted meditation in the past. More often than not, I am unsuccessful.

Sometimes I fall asleep, but usually I find myself forming mental checklists of tasks to be completed. Or I think about past conversations, turning words over and over in my mind, agonizing over what I should have said or done.

My mind becomes stuck in either the past or the future. And once I’ve reached this point, I simply cannot stay still. 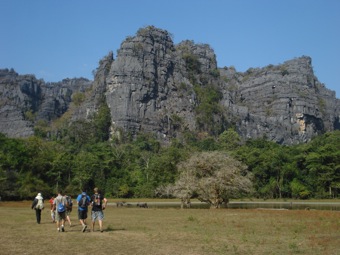 As we walked out of the jungle and into the fields, I asked Nick if he ever has difficulty staying focused.

Day to day life back home is driven by a “places to go people to meet” mentality.

He paused before answering my question. With each step we took, moth-like insects fluttered from the prickly grass.

“It must be hard in America,” he said. “There is so much noise.”

Indeed, there is. Day to day life back home is driven by a “places to go people to meet” mentality – cars honking, people shouting, alarms beeping – all fostering feelings of impatience, intolerance, and isolation.

We dwell in our own spheres of self-importance and find ourselves disconnected from the natural world and from each other.

I had to remind myself: I am in Laos. I closed my eyes and listened.

I heard my own footsteps upon the dry earth. I heard a twig snap as an animal moved through the brush. I heard the intertwined chirping of birds and insects.

But mostly, I heard the overpowering sound of the group’s ceaseless chatting, a disconnected stream of conversations, most of which concerned American pop culture.

We were bringing our noisiness to a place where it did not belong.

For the rest of the day, I listened.

We walked through caves that look like castles and swam in lagoons with water bluer than the cleanest pool at the most prestigious country club in all of the United States. 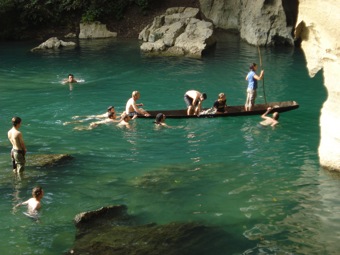 Cooling off in a lagoon halfway through the trek.

By sundown, it dawned on me: I will pass through this earth only once.

I resolved to be a part of it.

Two days later I lay awestruck beneath the night sky. The dark blanket above was dusted with more shimmering stars than my eyes could possibly see.

Better yet, there were no cell phone towers, no blinking airplanes, and no satellite dishes.

I listened to the sound of silence and heard a splendid symphony: the intermittent chirping of insects, the gentle hush of the breeze, and the soft sigh of my breath as I exhaled.
>

Breath in. Breath out.

I felt my body sink into the crevices of the ground, the dry grass no longer prickly.

Breath in, Breath out.

I focused on the infinite dark spaces between the stars.

Breath in. Breath out.

The sky was my blanket and the earth was my pillow.

I fell asleep, the palm of my left hand touching the earth while my right hand rested upon my heart.

The trek Anna writes about in this essay is described in the Matador article Trekking Central Laos.

You don’t have to go all the way to Laos in order to find peace. Check out The Importance of Quiet Time During Travel and 20 Basic, Fun, Sexy Resources for Beginning Meditators.

Both Anna Mack and Matador editor Tim Patterson were in Laos on the inaugural Mekong Semester gap-year program. For more on study abroad in Laos, check out Where There Be Dragons.

Tagged
Travel Laos
What did you think of this story?
Meh
Good
Awesome