I leave the tiny serving hatch, where three women wearing hair nets and harried expressions rush back and forth. Plates of food scattered around the kitchen are ferried to the multitude of teenage hands reaching through the bars at a speed my eyes can’t even keep up with.

Heading over to our regular table, I drop down into a chair with a sigh.

“I just had the Year 8s again. Pablo…he’s impossible!”

“I literally can’t believe what I used to put my teachers through. You know the most annoying kid in each of your classes? That’s what I was like at school. Except worse.”

It’s not a bad idea, really. Got an impossible pupil? Send him off to another country and tell him to teach. It’ll shake the belligerence right out of him.

Anyone who thinks teaching is a piece of cake can think again. Before I arrived in Ecuador, the most teaching experience I’d had was a month of English conversation classes in Kathmandu and a few days at a Thai village school. I hadn’t gained much teaching experience in either of these places — and yet both had instilled in me a sense that I might actually be good at teaching.

Then I walked into my first classroom of Ecuadorian teenagers at Colegio de Miguel Merchan, and realised I knew absolutely nothing.

Turns out that my prior experience had given me ideas on how to behave at the front of a classroom — the confidence levels and the vocal volume — but not much about the knowledge I had to actually impart. And here in Cuenca I wasn’t just winging it for a couple of weeks. I was working every morning for four months: 200 hours, in total.

So why hadn’t I learned how to be a teacher earlier? Well. In Nepal I taught primary school kids, who were mostly too shy to even speak in my classroom, let alone talk back to me. In Thailand, the village children were heartbreakingly excited to have three days with me talking away at the front of their class — I felt like a celebrity more than a teacher.

But from the first sarcastic stream of Spanish that erupted at the back of my classroom and caused a chorus of giggles, I quickly realised I was going to have to develop a thick skin and a matching attitude to cope with my Cuencan students. 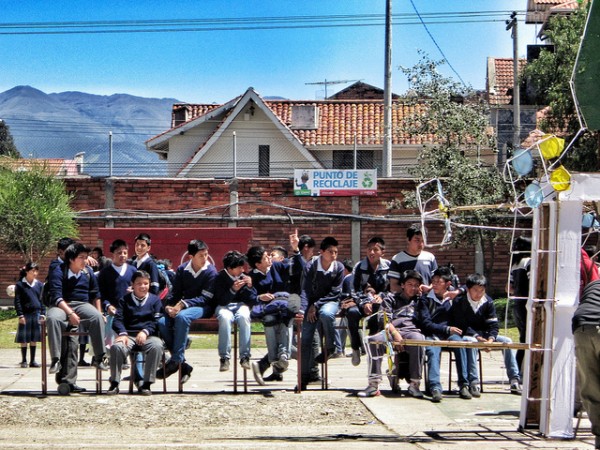 Because while I almost expected these teenagers to appreciate an English volunteer helping them with their language skills, in reality it was somewhat the opposite. They do want to learn (I think), but it’s not cool to look like you’re keen in front of your peers. And so they talk, they laugh, and they often try to make me look like I don’t know what I’m doing.

This behaviour means I’ve had to actively change my attitude, to a point where even my voice sounds different in my head. I’ve become much more authoritative, more focused, and as my words echo round the room I can see my students’ faces absorbing what I say.

There are still moments of confusion — when I rush through a lesson a bit too quickly, and it’s clear the kids don’t have a clue.

Teaching makes you question your resources.

When I taught English in Nepal and Thailand, I had no resources to work with. My Nepali headmaster pointed at his head to indicate where I was supposed to garner my teaching material from, and in Nong Weang we made up songs and ran around the classroom to try and attempt some kind of lesson.

In both placements, I always lusted after a nonexistent textbook.

But being presented with the Holy Grail of teaching gear at Miguel Merchan hasn’t been the easy ride I’d hoped. The reason? Sometimes textbooks are more of a hindrance than a help.

The Ecuadorian-government-issued textbook initially made me assume my students should have an English skill level significantly higher than they actually do. Reading a descriptive passage out loud three times and realising they understood none of it? A bit of an issue. And I’ve discovered multiple usage of slang words that aren’t just inappropriate for beginners, but also barely utilised nowadays.

The grass is always greener, really. Because much as I appreciate having a guided, text-based lesson plan to follow, sticking completely to the book has led me into some serious linguistic difficulties. Like having to explain what on earth Brian in the red shirt is talking about when he says “better hurry.” A totally understandable phrase for English beginners… 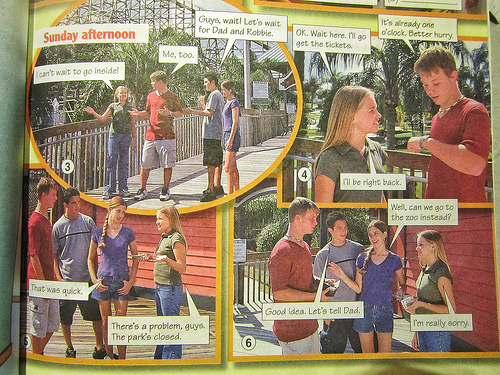 It’s also quite sad, as it means that ultimately they’re going to go through the entire textbook with only a tenuous grasp of the English language — particularly when the teachers aren’t fluent either, so can’t necessarily correct mistakes. Some of which are integral to language learning — the difference between “I wash my face,” “you wash your face,” and “she washes her face,” for example.

Of course, I’m still not a trained teacher, so it’s nigh on impossible trying to explain exactly why the third-person conjugation of a verb is always different to the rest of the verb’s conjugations. I’m still not even sure that ‘conjugation’ is the right word. Because while I’m a fluent English speaker, that doesn’t mean I actually know the correct ways to impart said skill.

So I get angry with the textbook (even though I’d never stop using it) because a lot of the time all it’s achieving is further confusion. When I’m marking homework, I come across mistakes like these:

So I have to spend another lesson explaining that, while the book demonstrates these sentences as correct, in fact there’s a bit more to it. And while I’m doing this, I wonder if they’re ever actually going to understand.

The positive thing about realising that my students barely know the basics of English is that it’s allowed me to really strip down and simplify the way I speak to them. Which, in essence, is the only way you really can learn a language. Baby steps. It’s also something you need to experience firsthand in order to change your attitude.

When I was in Nepal, I thought I’d accurately gauged what English my 9- and 10-year-old students knew. I thought I could write up a ‘simple’ conversation on the board, and we could practice repetition, and I’d impart some knowledge. 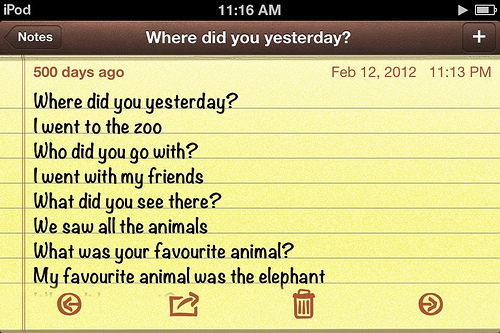 Browsing my old iPod notes the other day, I found the questions and answers that I wrote out.

Looking at this now actually makes me cringe.

Questions using two tenses with recommended answers only in the past? A multitude of vocabulary and different verbs for them to trip over? What the hell was I thinking?!

Obviously, that class in Nepal was a disaster. I could barely get my students pronouncing the words properly, let alone understanding their meaning. The problem is, a great deal of volunteer English teachers could easily make the same mistakes. Without trained teaching skills, it’s hard to understand just how slowly and simply beginner’s English needs to be taught.

Teaching gives you faith in children.

But for all the lamentations about their lack of skill, I still get the occasional surprise that renders me speechless. Like Henry Ramon, a teenager who asked me what the differences were between the words “watch,” “look,” and “see” — a question the group of Ecuadorian English teachers had also asked.

Like Edison, who wears rasta beads, has a hand tattoo, and took photos of his class notes on a mobile phone so he could cheat on a test. Wrong, certainly, but still serious out-of-the-box thinking! Like Estefanía, whose English is so good she sits at the front of the classroom and patiently whispers the right pronunciation to those left grasping for words. 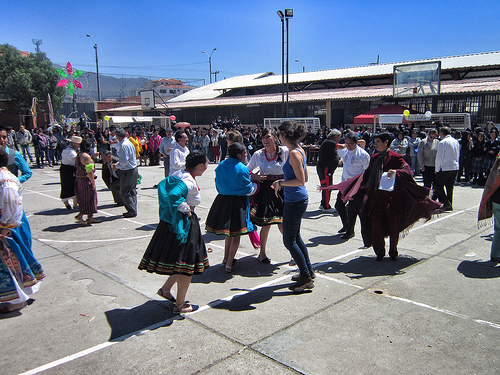 Dancing with my pupils at Fiesta Patronales

And like Pablo, the problem kid in the corner, who I spent four months despairing over. In my last week of classes he came to the front to do a presentation. And spoke in perfect English.

Teaching makes you re-evaluate yourself.

But most of all, my four months of teaching in Ecuador, all 200 hours of class time, have taught me something I wasn’t expecting: I don’t think I’m cut out for teaching.

It’s strange — I have many of the qualities of a good teacher. I speak slowly and clearly, I engage with my students, I have the right demeanour to stand at the front of a classroom and impart knowledge. And when they get things right, it really makes me happy, like I’ve accomplished something.

What I don’t have, though, is the passion required for such a career. And I’m pretty sure that, if I stuck with it, I’d eventually get found out.

It’s a sad realisation to make, not just because it’s a great way to combine travel and work, but also because I know plenty of people who’ve absolutely adored teaching English overseas. I thought I’d be one of them.

But of course, there’s no reason why I should be a good teacher. There’s nothing to say I’m required to enjoy such a career; and there’s also plenty of people I know who could never have handled even my four-month teaching stint in Ecuador.

So for the time being at least, I won’t be chasing volunteer placements that primarily involve teaching. While I do enjoy it, there’s not enough pulling me towards the role. And while I have no doubt I’ll be teaching English again soon, I’m going to put my volunteering abilities into something different.

First up? Helping out my cousin in São Bento, Brasil, with her newly established healing community, in the mountains just outside of Rio de Janeiro. Unless I find myself volunteering somewhere in Colombia first. My friend Adam suggested a great little organisation in Medellin, and I’ve just discovered a great project to volunteer in Rio’s favelas with. So many options…

* This post was originally published at Flora the Explorer and is reprinted here with permission.

A Visual Journey Through the Street Art of Cuenca, Ecuador