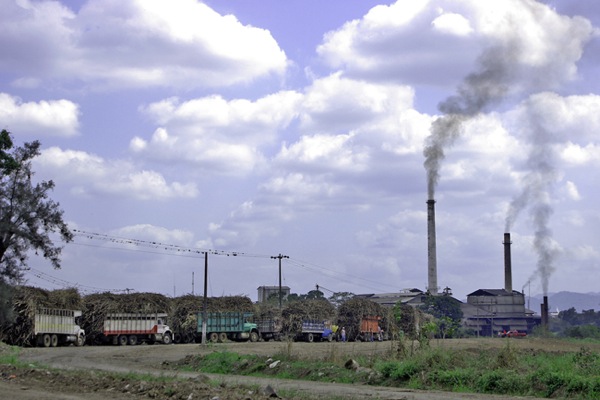 Travel is a way of seeing, and the lessons it teaches are often written on the landscapes right in front of our eyes.

IT SMELLED LIKE burning fungus. As if a whole village had collectively opened the forgotten containers of leftovers in the fridge, dumped out the contents, and set them on fire.

Outside the car sugar cane stretched for miles and miles, under a gray sky into which drifted columns of smoke. If it weren’t for the columns hinting at chugging, spewing factories, the landscape would’ve been peaceful, a tropical pastoral scene.

“That is not sugar cane,” I said righteously, “that is trash.”

It was sugar cane. I passed the cane trucks, my hands trembling at the wheel as their enormous weight heaved from side to side, sticks of cane falling out to litter the road. Once we saw one take a curve a little two quickly; it wobbled precariously for an eternal second, all its weight ready to slam down on the dirt road, before the driver righted it and drove on like nothing.

Jorge, the dog and I had come to the far northern corner of Oaxaca state, along the border with Veracruz, to take photos of a highway. Or rather, the Mexican Bank of Public Works and Services (BANOBRAS) had contracted Jorge to take photos of a highway and he had contracted me as his driver (I was to be paid in dark beer upon termination of the trip).

We had driven for five hours by the time we pulled off the federal highway to Veracruz and began jumping and jolting along the ratty, broken road through the sugar cane fields. Occasionally, we’d pass a pueblo – a ramshackle conglomeration of stores, tin-roofed houses, mud, and broken roads – our entrance and exit marked by the slam of the bumper against unmarked topes (speed bumps, which can appear anywhere and everywhere and range in size from gentle hills to massive ass-breaking wrinkles of asphalt.)

Just outside the pueblos were the cane factories. Up to then I had not associated “sugar cane” with “disgusting industrial pollution.” But there I was on the edge of a sugar cane field, taking in the scent of rot and waste and heat, watching a soot-covered factory straight out of 19th century London belch black smoke into the sky.

Backed up from the factories were trains of cane trucks waiting to be unloaded. They idled under their bulging bundles of sticks, the drivers getting drunk in nearby cantinas with broken windows. Old, weathered men with dirty wife-beaters gathered things around the train tracks. Barefoot kids cruised by on bikes. We drove on. 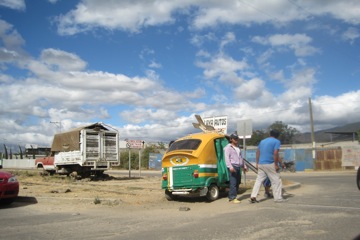 Finally, just as the heat had made us feel sticky, lethargic, and disgusting, we pulled up in the lucky little pueblo Banobras was smiling on. Like every other pueblo along the route, it was a heap of open-fronted stores, narrow alleyways, emaciated dogs, and trash in puddles.

We stopped to ask a woman, sitting outside of a curtained door with a couple of scruffy kids around her, where the highway was.

“Buenos tardes señora!” Jorge greeted her, “do you know where we can find the new highway?”

She crinkled up her face in confusion. “Highway?” she asked.

“Umm-hmm,” replied Jorge, “the one they just built?”

“Martina!!” she belted out to the area behind the curtain, “you know ‘bout any highway?”

A woman with kinky brown hair and full thighs in short shorts emerged from behind the curtain. “Highway?” she asked.

This situation multiplied itself several times before we realized that the citizens of this pueblo were not clued in on all the progress they were profiting from. Jorge decided to call the contact Banobras had given him, a representative of the municipal government. The contact asked us to meet him in the town square.

Like most town squares in most Mexican villages, this one was painted like a cake with blue and white frosting. A few lone men sat on benches and talked.

“Where is he?” Jorge wondered aloud. The dog, a German Shepherd completely out of place in a middle-of-nowhere tropical town, looked up at me pathetically and panted.

“I’ve gotta got to the bathroom,” I said whiningly. “I’m going to ask that guy where one is.”

I walked up to a señor with a noticeable potbelly pushing against his blue dress shirt and asked,

“Do you know where I could find a bathroom near here?”

“No hay,” he said, barely smiling under his mustache. So much for that. I thanked him anyway and turned around. Jorge, behind me, called out,

“Do you know where we can find a señor so-and-so?”

“That’s me!” the man said, and stepped forward with the puffed chest of one called to duty. How, I wondered, had this guy not been able to put together the young guy with a massive Pentax camera slung round his chest, the German Shepherd and the blond girl to figure out that maybe, just maybe, this was his photographer?

Miraculously, it turned out there was a bathroom and the man officiously ordered a pimply-faced teen to show me to it. The teen led me into the Municipal Government Office, which looked like a college frat the morning after a blowout party. Piles of folders and papers were strewn about the room, 5 peso plastic bags of salsa were dribbled here and there over (official?) documents, greasy taco wrappers overflowed from the trash cans. A heavyset woman sat amidst it all and gave me a big smile, gesturing to the door behind her.

“There’s no water!” she said cheerfully.

“No problem!” I assured her.

The bathroom scene was gruesome. I closed my eyes, held my breath, aimed for the toxic disaster of the toilet bowl, and swore to hold out next time for a patch of Earth on the side of the highway. If these were the municipal government’s facilities, I thought, what on Earth was the rest of the pueblo using? 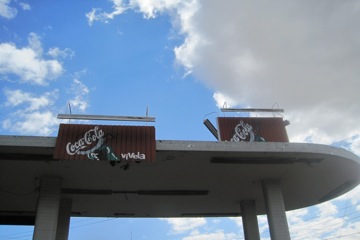 After I’d emerged from the bathroom we piled into the car to go check out the highway. The official directed us through the labyrinth of bumpy roads composing the pueblo until we arrived at a flat stretch of asphalt parallel to the railroad tracks.

“Make sure you focus on the white line!” the Banobras rep had told Jorge. “And really show how the highway is bringing progress to the community!”

There was no white line. Scrappy dogs with their ribs showing like accordions glared up at the car. A man with a huge bundle of cut cane shuffled along the road. We pulled onto a patch of yellow grass. A few feet away, a big group of men were getting drunk.

I caught snatches of drunken babble (“gringa guera orale mira su perro ven aqui guera”) as I leashed up the dog and Jorge and his contact began walking up the road looking for a money shot.

Around me were the signs of pueblo life—men getting obliteratingly drunk, roosters (which the dog lunged at, making the drunks laugh), handfuls of wide-eyed wary kids, shacks that looked as if they might collapse at any moment from the sheer fatigue of standing all day in the heat. The sky was gray and pregnant with clouds in the late afternoon, and the air was like a bath.

The dog and I scrambled up the little gravel hill to the railroad tracks and admired the view: a thin gray line of asphalt backed by cane for miles, the ghosts of factories in the distance. I came across villagers up there, mostly women carrying eggs and babies, and realized no one was walking on the road. Just Jorge and the municipal government man far up ahead.

Thirty minutes and fifty photos later, we were carting the contact back to his ravaged office. He waved us off with a look of extreme relief to be back to his job of standing sternly before the Municipal building. We turned around and pulled out of the pueblo.

“Porquería, no?” said Jorge the second we were alone in the car. This translates more or less as “bullshit.” I wholeheartedly agreed.

“Did you focus on the white line?” I asked sarcastically.

Jorge scoffed as he tried to figure out how to photoshop out the mangy dogs and barefoot kids.

“Well,” I said, “at least we’ve got a smoother ride from here on out.”

Two minutes later, the asphalt stopped abruptly and we plunged onto a pothole-and-rock-strewn disaster of a dirt road. The car sunk and burped and slammed against the ground like a Hollywood star on a destructive binge. Progress had lasted approximately 1 kilometer. I wondered how many extra rooms the municipal government men had added to their houses with the rest of the highway.

Sometimes, I thought, all you really need to do is see; sometimes the political and social and economic realities are there laid out in everyday life and landscape and you can read them simply by being present. Travel can teach you quick and dirty. About where sugar cane comes from. About where the money for “progress” in Mexico often goes. About how quickly a highway can change, and how to pray for your life under the hulking form of a sugar cane truck soaring to the heavens with sticks.

Coming Home To Oaxaca By the Numbers

Life in Oaxaca and the Many Layers of Travel