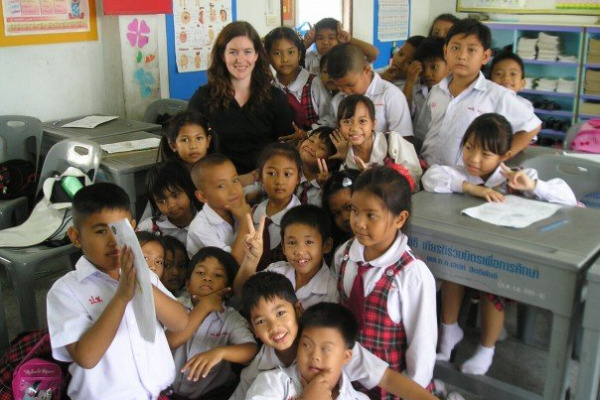 Looking back through old travel diaries shows Anne Merritt how she came to love teaching.

Recently I attended a group interview for ESL teaching positions. There, I met a handful of applicants who were young, cheery, and new to the field. The ink was still drying on their undergrad degrees, their passport pages were still unstamped. There was a giddy, nervous energy in the room. It was all familiar.

Back in 2005, before the iphone and the recession, before Lady Gaga and urban Ontario’s pho craze, I too was a newbie to the world of TESL and travel. I had been in their shoes before.

It made me feel wise. Soon after, it made it feel old.

These interviewees got me thinking about the past five years, how I entered the teaching world without much thought to it. To me, it seemed like a great way to spend a year after university, a way to travel without going broke.

A year turned into many years, and somewhere along the road there was a turning point. I realized that I actually loved teaching. It wasn’t just as a means to live overseas in cool places anymore. Somewhere in the course of time, it had become a proper career. I started flicking through old travel diaries, looking back on the first days in the classroom.

Apparently, I took to teaching as most take to long-term travel; not in one gushing high, but as a process of adaptation. 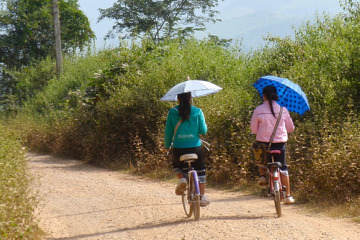 First, there was the honeymoon stage, teaching in a small town in Thailand. I had never before been to Asia, or any tropical country, and every little thing in my daily life was fascinating. In the diary, I gushed and gushed. I loved the other expats, the tropical fruits, the motorcycle taxis, the teakwood houses by the river. I mention monkeys or elephants on every single page. At first I didn’t ponder the teaching job much. After all, there was so much else to take in. But I never grew bored of the job either. I liked the hokey pokey and barnyard animal flashcards. I grew hooked on making Thai children smile.

Today I taught my first class at a government school and absolutely loved it. The schools are huge and the kids are so sweet – they literally run after you and watch your every move like schoolgirls to the Beatles in A Hard Day’s Night – a crew of them followed me into the bathroom and giggled while I washed chalk off my hands. The classes have like 45 students in them, but they’re pretty cute. I always knew I wouldn’t mind this job, I never thought I’d truly like it. Who would have thought….

Next, came was the rut. Five months later, and the freshness of the unknown was fading. It had been my intention to write. Teaching was a means to a paycheck so that I could write. But after long days of work, biking from school to school and shouting over classrooms of 50+ kids, I was too tired to pick up a pen.

I would meet backpackers en route to Laos, just back from Cambodia, and their stories filled me with travel envy. The cheery students were not longer a novelty. Now, when they ambushed me in the hall and tugged at my clothes, it felt invasive. I was less of a novelty to them, too, and they weren’t afraid to tune me out mid-lesson. A foreigner, they had learned, couldn’t punish them. Not really. Yep, this was the grouchy phase of culture shock. I had it bad.

Teaching requires just enough imagination to drain the creativity from me. I think ESL hurts my vocabulary. And I feel like a babysitter. Maybe I want to go home?

So what happened next? Eventually, I did go home. I finished my contract, traveled around Asia, then returned to Canada again. I worked a crummy barista job, didn’t get into grad school, and took off for more teaching instead. Teaching ESL was my Plan B; I was making some money, traveling again. The plan was to go abroad and bide more time trying to figure out how to get back on track in academia. But oh, life’s surprising.

I took a teaching job in England at a summer ESL camp. The campus was stunning, a place I came to refer to as Hogwarts. The students, like all teenagers, did not want to spend their summer in a classroom. At times it seemed impossible, trying to engage them in English lessons. But I spent hours planning, hours picking the brains of other teachers, and at some point things fell into place. The classes became a lot easier, a lot more fun. We had debates! We performed plays! We learned grammar points and we didn’t even mind! The once sullen students had become some of the funniest people I knew.

Halfway through the summer, I put the A-Ha! moment on paper.

Today Elisaveta told me I’m her favorite teacher. Celine came knocking on my door because she was homesick, just wanting to be in someone’s company, not alone in her room. Tomas hung around shyly after class, asking for advice with a girl problem. Today I sat in teacher’s room for two hours planning lessons and getting so excited thinking about how these sweet and intelligent kids will take on the materials I’m preparing. Maybe I really love this job.

Two years and two countries later, I still do.