THERE ARE ABOUT 165 steps up to Charles’* house in Valparaíso, Chile, followed by a 20-degree uphill walk. It’s not that I haven’t tried to count the stairs, it’s that some of them — made of cement and stone and the very spine of this vertical hump of land he lives on — are broken. Or missing. Or it depends if you take the right or left side of the stairs, but the middle doesn’t exist, because here a pipe carries water down from nobody knows where.

This is the water we drink when we’re at Charles’ house. It must come from a hilltop stream, and down at the bottom of the tunnel of the non-working ascensor there’s an outflow of water, which the flower sellers in the market use to fill their 5-gallon jugs that used to hold joint compound or some other construction-related paste. In these they place the flowers that people will buy on their way home, walking over their jagged sidewalks and piles of dog crap, to open and close first the metal gate, then the door to their homes.

We get a fair number of travel writers way down here in Chile, writing about my neighborhood, my city, my (borrowed) country, often in ways that I don’t recognize.

This is not tourist-friendly Valparaíso, which comprises three main hills: Cerro Alegre, Cerro Concepción, and Cerro Bellavista. There you can drink a coffee and eat crepes stuffed with alcayota jam at El Desayunador, or stay at boutique hotels, and walk on Paseo Gervasoni and buy hand-painted canvases or earrings from a piece of black fabric stretched over a frame. Apolitical, brightly colored murals, including some that depict the city itself, cover the walls, and tourists back away into the street, and their friends pose, holding their hands in V’s, and they frame the shot and then they click.

But not so on this cerro. Here we take morning walks with Chica (the house dog), and Charles pockets a bag to pick up after her, and after leaving the house laments having forgotten to bring a stick to chase off the various strays that come snarling out of nowhere.

There’s a spotty mangy black and white one, missing a patch of fur on her right side, who must have made a date with a German Shepherd, judging by her two brown and black puppies, too young still to have the pointed snout of their father. One of them has a malformed paw that points the wrong way when she hops along on the other three. 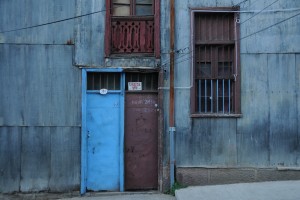 Charles knows these are the mangy dog’s puppies, like he knows that El Loco, one of the hangabouts on the cerro staircase, is addicted to drugs, likely pasta base, a cheap cocaine derivative that keeps you up all night, and by day turns you into an obvious angustiado, a drug addict, roving and rangy, though the word angustiado actually means “anguished.”

In Mexico the drug is called paco, which in Chile means “cop,” though when the ladies selling twisted scarves on the street for luka hear the police are coming, the term they use is las motos. And everyone grabs their groundcloths and packs up a bag and walks away from this corner, their corner, on Pedro Montt, a couple of blocks from the ocean over which these scarves have floated, in containers from China, where certainly they cost even less.

Charles knows tourist Valparaíso, too, because he walks tourists around a few days a week. He fields questions such as, “What percentage of the people who live here depend on the port for employment?” This question comes despite Charles’ explanation of the city’s decline. From the time of the California Gold Rush, Valparaíso was an important port, but development and the flow of easy, busy-port-related money shifted radically with the opening of the Panama Canal in 1914, which made sailing around South America, and stopping in Chile, superfluous.

Later, when San Antonio, some 100km south of Valparaíso, became the country’s main port, the decline continued. “How many people in Valparaíso depend on the port for employment?” this world-traveling, lip-pierced Australian asks. I forget if we’re supposed to include the women who sell scarves on the street that came in from China, or the narcotraficante who sells El Loco the pasta base. The cocaine may come in over the north border with Bolivia, but the baking soda used to process it probably comes by boat from somewhere. 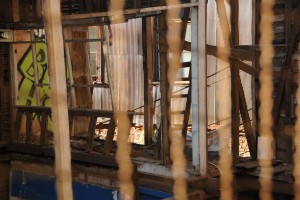 Charles knows all these stories, and that the people who wave to him from the empanada shop as we take one of the old-school trolleys (this one German, from the ’40s) will give him religious literature on becoming a Jehovah’s Witness the next time he goes by. He has a casera in the market who gives Chica a beet to eat, but the dog can’t figure out how to get into it, and rolls it around, carries it like a ball, and finally drops it, her teeth imprinted around the root and stem end. She then licks the innards of a nearby squash that’s waiting to be sold. We pull her away, but no one seems to care that the piece of squash now comes with a yapa in the form of dog spit.

We buy broccoli for soup, and the casera sticks some cauliflower in the bag, too, because she likes Charles, this gringo who — unlike nearly every other gringo who’d live in Santiago, or on one of the cerros where there’s espresso and art — has chosen this Valparaíso. Has chosen a hill that spouts water from nowhere, is home to restless, barking curs, laundry that hangs for days because the mist refuses to lift, wood houses with slats missing and nails hanging out that catch garbage that didn’t make it to the quebrada, piled with the stuff like a high-altitude junkyard.

Charles lives in a house on a hill that used to have an elevator and now doesn’t, but maybe someday it will be fixed. When the elevator is working you have to walk through a narrow tunnel that drips and oozes with water and moss, and wait on a long line of people carrying groceries and construction supplies. But the elevator is out of service for the foreseeable future, so we take the 165ish stairs. We stop at a small grocery store about 90 stairs up, to pick up some bread, and for Charles to put money on his phone. I wait outside with Chica, not trusting her after the squash incident, and the EverCrisp sign hanging over the register is sooty and brown, and the store owner tells us that the water is going to be shut off at 11:30, but since we don’t even know where the water comes from, that seems unlikely. 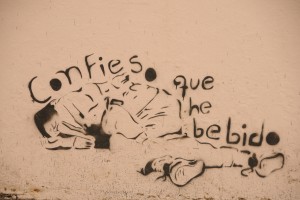 We get inside the house and start the soup for dinner, and give the dog a meal and borrow some wood from the new neighbor, who tells us that her curved window frame has a straight piece of glass in it, and we talk about maybe buying insulating tape or some expanding foam or, por último, she could stick some rags in the gaps. With the borrowed wood we start a fire in the wood-burning stove that’s illegal in Santiago, at least on the very polluted days, and bundle against the cold, which is worse tonight because it’s windy, and some of the roof’s corrugated plastic lifts up and flops loudly back down again with the wind. Someone should go up there and nail or wire it back down, but so far, no one seems to know who that person is.

Valparaíso is not my city. My city has a metro that runs through it and water that comes in pipes, and elevators in buildings, not up hillsides, and streets that you could wear heels on, if you were so inclined. I’m guilty of many superficial visits to Valparaíso, of snapping photos and glorifying the gussied-up parts, like the view from Pablo Neruda’s old study at La Sebastiana, one of the Nobel Laureate poet’s three houses-turned-museum. I have come to know Valparaíso in the eight years I’ve lived in Chile, but it’s never been mine, certainly not the way it is Charles’.

But sitting with a bowl of soup in my lap before a fire made of borrowed wood because the wood delivery hasn’t come recently, and even recognizing that I know only the bare minimum about this city that I don’t live in, and listening to the crashy flap of the roof that won’t stay put in the wind, I think about how much better I’ve gotten to know it since Charles moved here.

And then I think about the high-profile travel writer who had a quick stopover in Santiago not long ago. 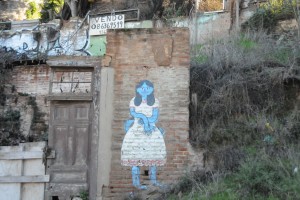 We get a fair number of travel writers down here in Chile, writing about my neighborhood, my city, my country, often in ways that I don’t recognize. I met this writer through a mutual friend. He had a quick overnight in Santiago, and generously treated us to gourmet ice cream at one of the poshest malls in the nation, which was close to where he was staying.

While I scooped my orangey-yellow lúcuma ice cream into my mouth with a tiny plastic spoon and talked about what it was like to live in Santiago, the traveling writer told me that if he had to choose to live anywhere in Chile, he wouldn’t choose Santiago.

Instead, he said, if he had to choose some place in Chile to live for a long time, he’d choose Valparaíso.

“No.” I said, thinking of the missing slats and hanging nails, and the noisy roof and the quebradas with trash and the non-functioning elevators and 165 stairs and the mangy dogs and the roving angustiados, and the filthy sign, and Chica licking the squash, and the wood deliveries that never come.

* Some names have been changed.

A Tale of Two Carmens: How I Learned Spanish

Putting Protest in Perspective in Chile