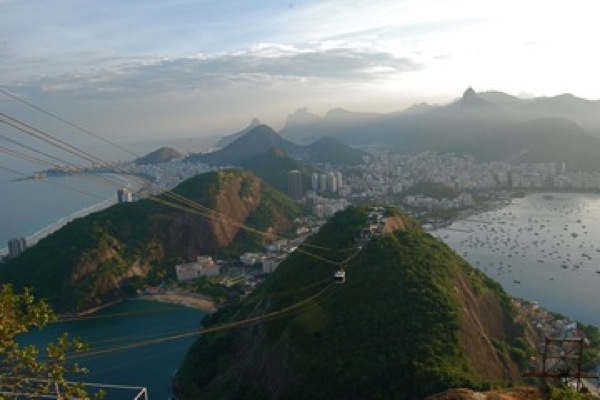 How to get to know Rio like the native cariocas

As summer in the northern hemisphere is coming to a close, booking a ticket to Rio de Janeiro for a warm, boozy winter escape sounds like a perfect idea.

Magazine articles, travel guides, and that friend of your parents have all told you what to see and do. Most have mentioned Ipanema and Copacabana (and that you shouldn’t leave them lest you be immediately caught in an international drug war), armored cars with drivers, and a visit to the Corcovado.

But there is a better way to experience the city. As a newly minted Carioca (two months and counting), I’ve learned a few tricks that have let me slip in a little better.

Havaianas : Buy them. Wear them everywhere.

Futebol: It’s inescapable in Brazil. Go to Maracanã, (the subway is a good way to get there) or find a bar where the game is on and listen to the cheers ebb and flow through the city. Pick your allegiance wisely. Flamengo is the most popular team in the country, likened often to the New York Yankees.

Fluminense is the team of the wealthy. Vasco is mainly supported by the Portuguese community here in Rio. Botafogo is the team of Rio’s middle class, losers to Flamengo in the finals of the State Championships for each of the last three years. Who you choose will say more about you than you might think. 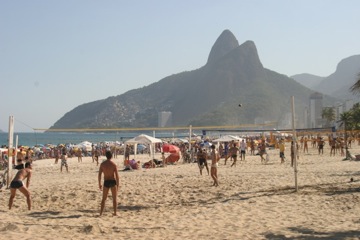 Ipanema Beach: The hip high-school and college kids hang out between Posto 9 and Posto 10—there’s an especially tall palm tree that marks the most desirable spot if sociability is what you’re after (if you’d rather just read a book head to Posto 11 or 12).

Groups of guys juggle soccer balls in circles near the surf and girls chat and giggle, and look impossibly beautiful in their tiny bathing suits. The beach in Brazil is a place of sounds and commerce. Vendors traverse the sand selling everything from matte tea to bikini tops. Listen before looking up; making eye contact is a mistake unless you mean business. Copacabana has glossy glass kiosks that are perfect for sunset beers and a plate of aipim to tide you over until your 11pm dinner.

Beach Chairs: All of the tents on the beach rent chairs for the day—the word for chair is cadeira. They’ll take your name and set you up on a spot of sand. You can order icy sodas and agua de coco, and they’ll keep a tally of your drinks. You just pay for everything at the end.

Don’t bring a beach towel. Buy what looks like a hippie tapestry from a perfectly bronzed vendor selling them on the beach (they’re $7) and use it to cover your chair before you sit down (think of how many asses in tiny bikinis have used the same chair).

Juice Bars: Juice bars are one of Rio’s best features and they’re on nearly every corner. Bibi Sucos in Leblon is a great one. Pay the cashier first, and then give your receipt to one of the men behind the counter. He will take it from you and shout your order back.

Your açaí complete (açaí with banana and granola blended in) or your queijo quente (grilled cheese) will be delivered shortly.

Opt for the churros if you crave something fried, but make sure you fill it with delicious doce de leite. The popcorn is always fresh, and the corn on the cob is a post-surfing favorite for cariocas. 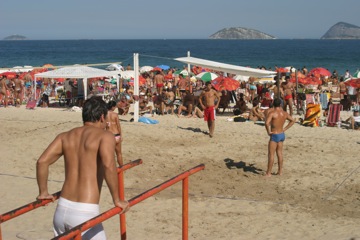 Late Night: Pizza Guanabara has bad pizza, but a fun late night scene. Only go there after drinking. Cariocas put ketchup on their pizza to cut the grease. Jobi a few doors down is even better.

Lapa and Samba: Lapa is a good place to do said drinking. Most guidebooks tout Rio Scenarium as the best samba club there, but it’s a samba club the way the Hardrock Cafe is a burger joint in New York. The line at Rio Scenarium is long, the cover is expensive, and the lights are too bright for any self-respecting drinking establishment.

Drink outside instead, next to the old aqueduct the locals refer to as the Arcos. Music blares from every window, booze carts sell $1 Skols, and people dance and shout and laugh, sem cover charge.

Bars, Botequins and Botecos: Botequins are the best places to drink, hang out, and spend rainy days. Jobi is a quintessential one, or you could try Devassa (a chain, in the best, most reliable way). Order chopp, iced cold draught beer, and some petiscos or small snacks.

When cariocas eat bolinhos (fried croquettes with bacalau, shrimp or meat in them) they wrap them in paper napkins and take small bites. If you want another beer, say “mais uma,” rather than “uma mais.”

Be forewarned about Santa Teresa. There have been many articles written recently about Santa Teresa (as a beach alternative), but hop in a cab and your driver might not even know how to get there. That’s because Santa Teresa appears to hold more intrigue for American travel writers than it does for the average Carioca.

The bohemian vibe is evident in the Mrs. Dinsmoor mansions being reclaimed by the rainforest, but there’s not much to do if you don’t know the tiny bars where Rio’s artists go to hideout and drink. They’re not on the main street, which only has four overpriced, mediocre restaurants and two trinket shops.

Rainy Days: Rio is not a city that is good in the rain. Traffic (jams are called engarrafamentos in Portuguese) is impossible and the city doesn’t have many indoor activities. Most cariocas go to the malls (Rio Sul is the biggest, but Shopping Leblon, Rio Design, Shopping Gávea all have their charms) or to the movies. The O Globo website has listings for films and can tell you what language they’re in.

Safety: In Rio, don’t be afraid, just be smart. It’s dangerous to go wandering into a Favela by yourself. It’s stupid, as in any country, to go walking down sketchy streets late at night. Explore everywhere, just try to blend in as much as possible. Don’t wear jewelry, and don’t carry much with you.

Just about every piece of Rio is worth seeing—the old government buildings of the Centro, the pretty streets of the Jardim Botanico, the Futebol stadiums, the very intimate Botafogo. Don’t ignore the danger warnings, but don’t let them prevent you from experiencing the joys of this city they call marvelous.

Tagged
Travel Rio de Janeiro, Brazil
What did you think of this story?
Meh
Good
Awesome