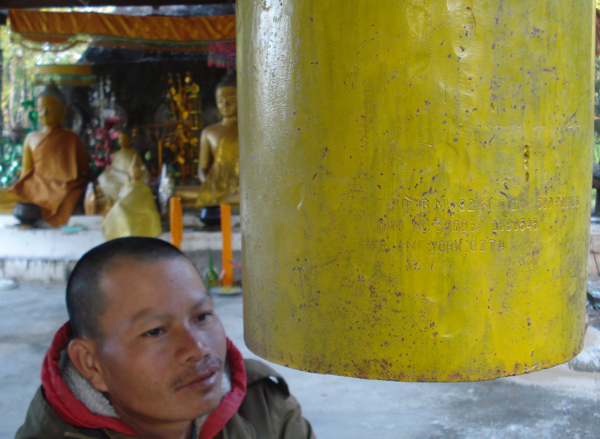 A local man examines the bombshell, now used as a prayer bell in rural Laos.

From 1964 to 1973, American bombers dropped over two million tons of bombs on rural areas of Laos, a fiery sideshow to the conflict in Vietnam. About 700 lbs of bombs were dropped for every man, woman and child in Laos. 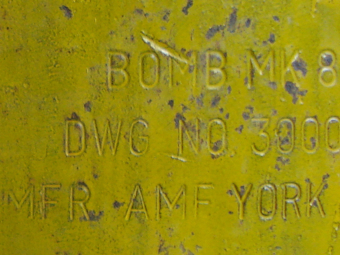 Here’s a detail of the writing on the bomb.

Some of these bombs failed to detonate on impact but are still active, and continue to kill and maim civilians today.

Often, people are killed while trying to harvest scrap metal from the fallen bombs.

Bombshells are now used as flower pots, as boats and as stilts for traditional Lao homes. The prayer bell bombshell in the photos is located at a temple in rural Khammoune Province.

You can visit the temple on a trek in the Phu Hin Boun protected area.

For more information on the legacy of the secret bombing of Laos, check out COPE, a remarkable organization based in Vientiane.

Other good resources include the films Bomb Harvest and the fantastic (unreleased) documentary The CIA in Southeast Asia: The Most Secret Place on Earth.

Learning about the massive bombing of Laos was an transformational experience for me, and the inspiration for my American Manifesto.

Tagged
Travel Laos
What did you think of this story?
Meh
Good
Awesome