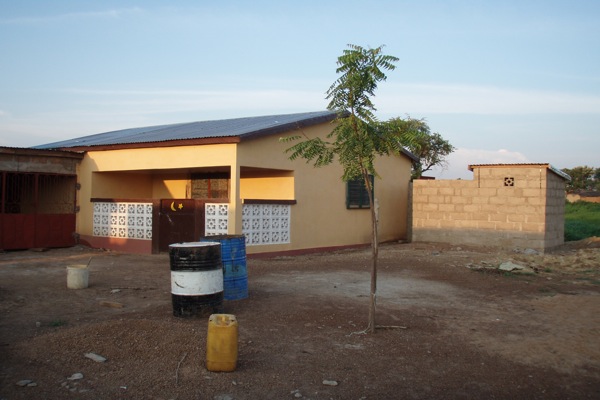 After coming back from two years in Togo, Linda Golden finds readjusting to life in the U.S. a little weirder than she expected.

Early in our Peace Corps training, the training coordinator scheduled a session on the readjustment we’d face in two years, when we returned to the States.

My fellow trainees and I had been in-country maybe four weeks, long enough to suffer gastrointestinal disasters, grow weary of bucket baths and eat enough pâte (a white dough-like carb base usually made from corn meal and eaten with sauce) to inspire dreams of burritos and hamburgers. As we prepared to talk about readjustment, I overheard two other volunteers-in-training scoff at the idea.

“Like I’m really going to need to readjust to hot showers and A/C.”

I know myself. After spending five months studying abroad in Switzerland, I was overwhelmed by the warehouse-size of the first American supermarket I visited. I knew I would have some readjusting to do coming back from Togo, but I imagined it would be more obvious – freezing in the winter, freaking out about new technological developments.

There was some of that. I got so cold this winter, I started wishing for the heat rash that tormented me in Togo’s hot season. But the changes I notice most are weird little habits and bizarre reactions to minor occurrences – things I would never have thought or done had I not lived in Togo.

My village house sheltered me and a range of wildlife. In the rainy season, evening reading and writing sessions devolved into a standoff between willpower and the flying, buzzing, hopping insects drawn to my oil lamp.

A trip to the latrine in the night meant shining the flashlight ahead to avoid stepping on toads – or having toads hop on me (I have nothing against toads, except when they jump on or in front of me in the dark).

Spiders, mice or salamanders – something was forever scurrying out of the way when I opened the latrine door for a midnight visit. Now, every hair brushing my arm is a winged beetle aiming to tangle itself in my mane. 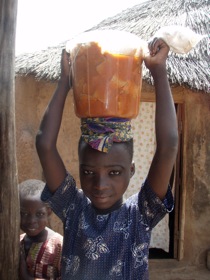 Every rock or large leaf on the sidewalk at dusk is a toad waiting to surprise me by moving into my path at the last minute. Last week, while making a sandwich, my heart stopped when I saw a two-inch cockroach scamper onto the bag of lettuce. It was part of the blue packaging on the cheese I’d just opened.

That trash just goes away

In Togo, I burned my trash and was careful about what I threw away. I held on to batteries because I didn’t know what to do with them, but was sure tossing them in fire was not the answer. I composted my food waste. I saved matches and used the unburned ends to light my oil lamp from my reading candle. A few months ago, I nearly reprimanded my boyfriend after he put an aerosol can in the trash.

“What is he thinking? That will explode!” As soon as I thought it, I remembered – we’re not going to burn the contents of the garbage can. It will just disappear with the garbage truck. Goodbye, empty Raid bottle.

I still leave half-burned matches lying on the kitchen counters.

But there are still bugs – This winter, I made tea and spilled a little sugar on the floor. My immediate reaction was, “Clean it up before the ants get it.”

We live in a third floor apartment. It was February. The ants were not coming upstairs from under the two feet of snow to carry off the sugar. I couldn’t see the sugar – so I left it. 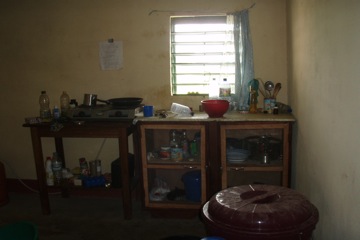 Three months later, when the ants arrived and annexed the raisins I’d purchased the day before, my boyfriend refused to relax until all the ants were gone. Meanwhile, I was happy to eat my raisin-less cereal and let the ants come and go, figuring we could just deal with them later. They’d won already, and I was late to work.

After all, they’re not lethal (for the most part) – I was on some kind of anti-malarial for the full two years in Togo. I slept under a bed net and lathered myself in insect repellent when I couldn’t.

Two weeks ago, I saw a mosquito in the bathroom. I instantly thought, “malaria,” then remembered this is not a problem, and no, it was probably not laying mosquito eggs in the toilet. Still, that single mosquito pulled up the memory of my latrine in rainy season, when mosquitoes and drain flies covered the walls of my open-air bathroom.

I have a strange, new relationship with water, the source of many, variegated troubles (giardia, amoebas, diarrhea, guinea worm, schistosomiasis, dysentery, cholera, dehydration), most of which involve lots of time hanging out near a toilet.

To avoid these, I filtered and bleached my water, washed my veggies in bleached water and occasionally, boiled water I used for bucket baths. I carried a Nalgene with me everywhere, drinking nearly a gallon of water a day in the hopes of staying hydrated.

I still got dehydrated, once to the point of fainting on my porch, but I avoided some of the nastier, common water-borne complications like giardia and amoebas.

But now, I see photos of a high school me, rinsing my legs in a pond-sized puddle after a particularly muddy cross-country meet and think, “Great way to get schisto!”

I visit family in Richmond, Virginia and wonder if the tap water is safe to drink. If I don’t have a water bottle with me, I’m convinced I’ll dehydrate. I think I can solve all my medical complaints with water, Gatorade and ibuprofen.

Actually, I think I can solve them with Oral Rehydration Salts (ORS), a salty powder added to water that’s basically a cheaper (if you buy it abroad), disgusting version of Gatorade. I believe in the power of ORS, and despite Gatorade’s accessibility and flavor, I wish I brought ORS home.

I miss street and finger food – Every week, I walk through the grocery store thinking, “I need to buy some snacks,” but I never want to pay for granola bars or Cheez-Its. Sometimes I make my own trail mix, but not only am I cheap, I’m lazy.

I just want to walk out of my apartment and buy a four-cent bag of peanuts on the way to work. Or a hard-boiled egg with a plastic-wrapped thimble-full of powdered hot pepper to season it. Or black-eyed peas sold in a black plastic bag. And then I want to eat my snack with my bare hands. Not always, just some days. Fortunately, there’s an Ethiopian restaurant in town where that’s ok.

These habits and instincts are infrequent (except thinking there are bugs on or near me. That happens regularly). At worst, people will think I’m strange for the jumpiness or just dirty for not picking up my sugar and match sticks.

And while I may be weirder than I was in 2007, I feel stronger – kind of invincible. I biked 400 miles (rough estimate) in a tropical country – I can bike around the streets of Louisville, Kentucky.

In 27 months, I was sick more than I had been in 10 years. Just pass the ibuprofen (and the occasional antibiotics). I eliminated an infestation of baby spiders (at night, by the light of an oil lamp and flashlight, mind you) and killed a scorpion with a running shoe. When I meet my next roach – or toad on the way to the bathroom, unlikely as that is – I’ll know how to take care of it.

Tagged
Expat Life Togo
What did you think of this story?
Meh
Good
Awesome

First Person Dispatch: Why I Wake Up Early on Saturdays