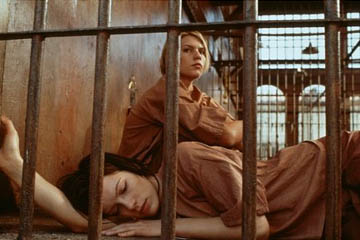 It’s every traveler’s worst nightmare: Being arrested or even imprisoned while visiting a foreign country far from home.

As movies like Brokedown Palace and Bridget Jones’ Diary have shown, such occurrences can and do occur.

Whether it’s a case of being in the wrong place at the wrong time, being uninformed about different laws, or putting trust in the wrong people…none of this matters when a foreigner is at the mercy of the host country’s regulations and authorities. According to the US State Department, “ignorance of the law is no excuse.”

Fortunately, most people’s voyages go off without a hitch, but an unlucky minority find themselves on the wrong side of a jail cell.

Here are 10 cases, some with happy endings, others that have yet to be resolved:

2007 – An Icelandic woman was arrested at JFK airport for having overstayed a U.S. tourist visa nearly a decade before. She was interrogated and spent a day shackled in prison before being deported.

2003 – While being arrested in Singapore for chewing gum seems to be an urban myth, a British backpacker ran afoul of the law in this small country for carrying a model plane in her hand luggage with replica missiles that were mistaken for live bullets. She was freed with a warning after spending 10 hours in a jail cell.

2003 – A female holidaymaker was arrested in the Greek town of Faliraki for indecent exposure (baring her breasts in a resort competition) by police fed up with an epidemic of loutish behaviour by tourists. In the end, she paid a fine to avoid an 8 month prison sentence.

2001 – A group of 14 British and Dutch “planespotters” (airplane enthusiasts) were arrested and sentenced to up to 3 years in Greek jail for allegedly committing espionage by photographing military aircraft at an airshow. After a long process, their convictions were finally overturned one year later.

2005 – An 18 year old English football fan was arrested in Bulgaria for allegedly attacking a local man (which another English man later confessed to.)

He was found guilty of attempted murder and given a sentence of 15 years. This was eventually reduced to 10 years (with the remainder served in Britain) but no retrial was granted. The case has recently been taken to the European Parliament.

2006 – A 19 year old Briton was arrested in Tunisia for having sex with a minor (a consenting 14 year old British girl who had told him she was 18.) The sentence was for up to 6 years but eventually he served a suspended 6 months in prison and returned home in 2007.

Carrying drugs (either knowingly or unknowingly) is often one of the most harshly punished offenses around the world. Some people consciously take the risk of trafficking substances across borders, but others become unsuspecting mules.

2002 – A British backpacker was arrested in India and sentenced to ten years in jail for drug smuggling (when the drugs had been planted in her bag by an acquaintance.) Fortunately, her story ended (relatively) happily: after spending 5 years in Indian prison, she was pardoned and released.

2006 – In a similar story, another backpacker in India was accused of drug smuggling (again, it is suspected they were placed in his luggage by someone else.) This man is currently in prison serving the early stages of a ten-year sentence, though his family continues to fight for his freedom.

2008 – The United Arab Emirates is well known for its incredibly stringent drugs rules. Possession of a long list of substances is illegal (and this includes traces found in the bloodstream.) In 2008, a traveler passing through Dubai airport was jailed for 4 years after a .003 gram trace of cannabis was found stuck to the tread of his shoe (an amount roughly equivalent in size to a grain of sugar).

2008 – And finally, in another recent high-profile case coming out of Dubai, “A Swiss national is serving a four-year jail term after three poppy seeds from a bread roll he ate at Heathrow airport were found on his clothes.”

Further details of the situation are hard to come by, but as this BBC article suggests, while it may be the most “extreme,” it’s not the only occurrence. Even a member of the Pakistani cricket team was held for 19 days and just recently released without charge.

While it’s unlikely the average person will encounter any problems, information and preparation can often go a long way in helping ensure that any experience with foreign prisons can be limited to that which is seen on the movie screens!

Do you know any other extreme cases of travelers arrested abroad? Share in the comments!