A TRAVELER WALKS down the red-light district of Manila City, Philippines. Carrying a backpack, a distressed expression and a pack of eager street children at his heels, he is left at a crossroads — to give or not to give?

Some yield to the desperate pleas, guilt ridden for the clean beds they know are waiting for them; others stare into space, hoping that their polite dismissal really is for the best.

This is not an uncommon sight in countries such as the Philippines, Thailand, Brazil and India, wherein the divide between the “haves” and the “have-nots” is extreme. Though poverty is a global issue, the evidence of such despair is most blatantly displayed in developing nations.

There is no avoiding a child’s eyes looking up at you, an amputee holding out an empty McDonald’s cup or a mother and infant sitting in the blazing heat hoping to look “pathetic” enough to warrant the charity of a few coins.

It is an anxiety-ridden dilemma.

Knowing that these kids have not only been damaged by their homeless state, but also by the constant sexual, physical and emotional abuse, makes saying “no” a tortuous task. However, handing out a few coins results in sense of helplessness as this donation often goes to their “beggar masters,” drugs or to parents who often spend it on alcohol or illegal substances.

Therefore, how can travelers help when money is clearly not the answer? Here’s 10 things you can do:

There is no avoiding a child’s eyes looking up at you, an amputee holding out an empty McDonald’s cup.

Even if you’re not part of the Peace Corps or United Planet Quest, does not mean that you can’t reach out.

Aside from volunteer vacation programs such as Global Volunteers, you can do your part, even for just a day, with a legitimate agency. There are several directories of international outreach opportunities online, such as Idealist.org, Eyesong.org and Lonely Planet’s Thorn Tree forum on volunteerism.

If you are interested in a more direct method, then head over to the local church, mosque, temple and ask if they need any help or know any local programs or schools where you can take part.

You can also peruse the internet and search for community organizations such as Hands on Manila in the Philippines, Asha.org in India or Streetfriends.org in Cambodia.

The simplest and the most valuable thing you can give to a child is time. Rather than brushing them off to make your way to the next tourist site, spend some time to ask them their names, what they like to do, or their favorite games.

Traveler, writer and co-founder of the Ethical Traveler, Jeff Greenwald stated in an interview with the Globe and Mail that “Generosity doesn’t have to mean giving away things. Sharing a bit of yourself, opening a window into your own world, is a good place to begin.” 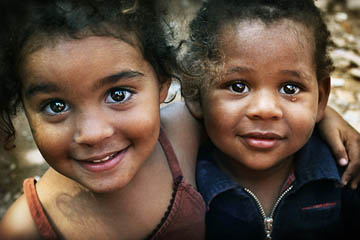 If you’ve made a connection with a particular child, dining together is a great way to spend time with someone whilst letting them enjoy a warm meal. Try to eat together in one of the local eateries rather than a fast food chain.

Not only will it be healthier but it will also let the child feel more secure knowing that you are interested in his or her country and culture. However, remain cautious when extending the invitiation, as one may end up meaning that you’re taking the entire community out for a treat.

Giving things such as pens, candies or clothes may seem like a great alternative, but it often leads to a whole slew of problems.

Not only does it breed materialism, it also promotes unhealthy competition and makes them view begging as a “fun” possibility. Rather than learning anything from travelers, children come to view foreigners as gift dispensers.

Author and vagabonder Jeff Greenwald states in Straight.com that it becomes like “trick-or-treating” for the kids. Louis, a traveler from Ottawa says on the Journeywoman.com board that handing out pens and balloons often causes fights, pollution and “gets children used to systematically ask for things.”

In Jeff Greenwald’s article “A Fistful of Rupees: Coping with Begging on Third World Trails” he recounts an experience with some kids from Delhi and the power of an inflatable globe:

“Cornered by a troupe of 10-year-old beggars in Delhi, I pulled out a small, inflatable world globe. What started as a feeding frenzy quickly became a geography lesson. The kids immediately began matching bits of news they’d heard on the radio – about Russia, Japan and the U.S. – to the appropriate countries, and argued heatedly about why India was pink and Pakistan blue.”

Another great tool is your digital camera. Kids love to ham it up and in my experience, they will often burst into excited shrieks and start making funny faces, flashing “peace signs” or doing group photo ops. If you can, show them the results, and guaranteed you’ll have a ton of kids squealing with excitement and eager to do another round of wacky poses.

If you’re musically inclined (or in denial of being tone-deaf), try singing a few lines of a global pop song like Michael Jackson’s “Thriller.” More often than not, you’ll have kid’s belting out the lyrics with an accompanying “moonwalk.”

If you want to leave a part of yourself behind, then how about a postcard of your hometown or a drawing of cities you’ve visited? Not only will you be sharing a part of where you’re from or where you’ve been, but it also provides a great image of the world beyond the slums. You can make it even more personal by writing a few words or do a group drawing session on the postcard.

Even if you’re not the artistic type, getting the kids involved in a spontaneous ‘arts and crafts’ session is a great way to get their creative juices flowing.

Small projects such as showing them some cool Origami techniques (or paper airplanes) or making simple bracelets with some string will be a mutually inspiring activity. If you’d like to do something more in-depth, you can also check out an charity organizations that specialize in this field.

Have the children teach you some of the local lingo. In turn, share some funny phrases in your language. This method beats any phrase book you can buy, as you’ll be learning the key phrases to getting around the city. In turn you’ll gain a few friends and make them feel like they’ve done something special.

Just because the jingling coins in your pocket are rendered useless on the street, remember that there are still ways to shell out those pennies without the guilt.

You can head over to the local schools or organizations and donate books, coloring materials and other learning paraphernalia.

Do some internet sleuthing and find out how you can help out when you return home. A great read is Emma Jacobs article on helping the locals you leave behind.

Though there aren’t any clear cut answers, recognizing that poverty is a global issue and that children all over the world deserve a future is the first step in the right direction. As Dr. Loretta Scott famously said: “We can’t help everyone, but everyone can help someone.”

Do you have advice on helping street children? Share your thoughts in the comments!