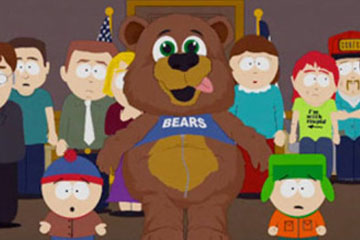 Heard about the Southpark/Mohammed hoopla? In case you missed it, a group of fundamentalist Muslims are screaming death threats at the creators of the show, Trey Parker and Matt Stone, for their depiction of the sacred prophet of Islam.

I didn’t see the episode, but apparently they put Santa Claus in a bear costume while asking the audience to pretend it was the Prophet. Unfortunately, the clip seems to have been removed from everywhere except for a Fox News roundup.

Tons of discussion has ensued all over the web, including these remarks from Muslims compiled in a CNN article:

Zainab Sher said, “2 b honest 200 episode wasnt funny at all to me!” She then added, “Bringing Mohammad back! when you know it is a sensitive issue […] seems to me southpark is running out of ideas!!! that angle just brought everything down.”

Ahmed Ata Saada said he had seen all “South Park” episodes and he found them “very fun.” But he found it “ridiculous” to make fun of other people’s beliefs and sacred religion.

But one of the most interesting responses comes from Irshad Manji, a devout Muslim who is director of the Moral Courage Project at New York University and author of The Trouble with Islam Today: A Muslim’s Call for Reform in Her Faith.

She wrote a post entitled, Sign My Petition…or else, and asked her readers to add their names against Islamic death threats.

Why? Well, in her words, Islam actually accepts free expression for several reasons:

1) The Prophet Muhammad warned Muslims not to put him on a pedestal. That’s because he’s not the one to be revered; God alone is to be worshiped. Welcome to the hypocrisy of those who claim to be protecting the Prophet while violating one of his core teachings.

2) The Qur’an expressly affirms that “there is no compulsion in religion” (2:256). Which means nobody should be forced to follow Islamic traditions, even if they’re “mocking” the religion.

3) The Qur’an advises Muslims to deal with hurt feelings by getting up and walking away (4:140). That’s it. Don’t retaliate. Just “do not sit with them.” Change the channel. Click the mouse. Move on. Once the dust has settled, come back to discuss the issues with those who’ve offended you.

I also can’t help but wonder, how many other religions/groups/people has South Park made fun of? As far as I can tell, they’ve just about covered everyone.

What do you think about the controversy around this South Park episode? Share your thoughts below.