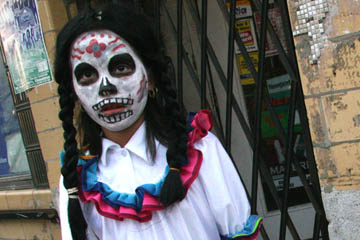 Little girl at Day of the Dead / Photo by Senor Codo

Upon hearing the word “death” one instantly thinks of war, grieving, burial or cremation, Heaven and Hell, and for more than a few, fear.

Many Westerners consider death a taboo subject and considered a social faux pas when broached in conversation, especially when it refers to someone who has recently died.

The irony is that everyone currently alive-everyone reading this-will eventually die despite the fact that so few people seem to actually consider his or her own mortality.

But the universality of death is not what makes it a fascinating topic, but rather the cultural, individual and epochal attitudes that have changed and continue to change.

In the West, the concept of death as it is known today is relatively recent.

It is generally held to have originated sometime around the Renaissance, or even slightly earlier, during the Black Death, when conservative estimates state that a third of Europe’s population perished.

Immediately prior, during the Middle Ages, people considered death to be far less menacing, as the plausibility of death was more a fact of life, and therefore less frightening.

Death In The Ages

Even earlier, the Greeks and then the Romans were no strangers to dealing with death on a regular basis.

It can still be argued that through film, collectively the West still enjoys watching people die.

In Greek mythology, Hypnos was the god of death. His image changed from a harsher god in the earliest of references into a kind, sympathetic and almost Cupid-like god. This softer appearance invited people to adore passing into the Heavens, symbolic of the fact that death comes to all and should not be feared.

Roman culture went a step farther with gladiatorial combat, which basks in the revelry of death for entertainment. Despite the numerous changes that have occurred since the fall of Rome, this idea stayed with many cultures in the West for a long time.

English peasants were known picnic at the execution grounds and in the Napoleonic Age. During the American Revolutionary War it was not uncommon for spectators to watch some of the major battles.

Thanks to modern advances in medicine, communication, and technology, seeing someone die for the amusement of others does not have the same effect on people today. A greater proximity to death will almost always desensitize one to it.

And it can still be argued that through film, collectively the West still enjoys watching people die.

Religion is also a contributing factor towards a culture’s attitude towards death. One theme that consistently presents itself throughout religion is that of duality – the idea that the body is nothing more than a vessel for the soul. 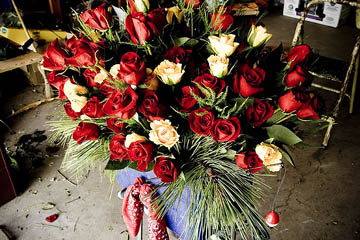 Roses for a funeral / Photo by Katie@!

This evokes the eastern religions such as Hinduism and Buddhism in which the soul is transferred from the body to a mysterious spirit world until it can once again reincarnate as an earthly creature such as man or animal.

In many ways this view is also paramount to modern Christianity, which believes the body contains a soul that then departs the body upon death.

Duncan MacDougall performed his now famous experiment in 1907 in which he weighed dying patients, postulating that at the moment of death the body loses twenty-one grams of mass.

Although there is little to no scientific merit for claim, in his eyes and the eyes of his followers this proves that the soul leaves the body at the moment of death.

The terror of executions such as beheading or burning lay not in the pain of dying and the taking of a life, but in forbidding the person being denied entrance into the afterlife. It was the eternality of death that made these types of executions so damning (literally).

Death is now taboo in many cultures from the Inuit to Eastern African cultures.

In some of the most extreme cases the name of a deceased member of the community may not be spoken by those that still live. Australian aboriginals remove the pictures of the dead from public display, or have their faces covered; erasing their image as if they never existed.

But the death taboo is not universal. Many Hindus and Buddhists openly discuss death. In these cultures, death is strictly a period of time in which the soul searches for another body to inhabit. Death is less of an end and therefore less mourning is required.

Ultimately, the interpretation of an afterlife heavily influences attitudes towards death.

With ever-increasing access to customs and traditional practices through modern travel, the practices and rituals regarding death are rediscovered and examined anew.

It is an interesting to consider: what death practices with be in vogue as the world continues to shrink, blend, adapt and reinvent?