View all travel news
Top Destinations
Top CitiesView All Destinations
Trending Regions
Trending Cities
Load More
Baxter Jackson takes us on a tour of a sacred Omani fort that is no longer open to the public, to discover the legends within.

WHEN I ASKED my Omani students from Bahla about the legends of genies and sorcery, they squirmed in their seats and very reluctantly shared with me the rumors about those who channel the power of the djinn (genies), the tale of a bewitched tree in the souq, and the legend of the flying mosque.

Living in Nizwa (38 kilometers to the south of Bahla) and loving the paranormal, these stories — of wizards controlling genies for their own nefarious purposes, of a tree more cursed than the Hope Diamond, and of a mosque that appeared miraculously overnight — piqued my curiosity.

I needed to investigate firsthand. The only problem was that Bahla Fort, the epicenter of magic in the Sultanate, hasn’t been open to the public since it was declared a UNESCO World Heritage Site in 1988.

A colleague at the local college where I was teaching English just so happened to have a friend in the Omani Ministry of Culture who was willing to let us into the fort if we agreed to keep it hush-hush. A little bit more digging revealed that the man to talk to about such occult arts was Moalim Salim, a practitioner adept in dispelling djinn who had possessed the living. 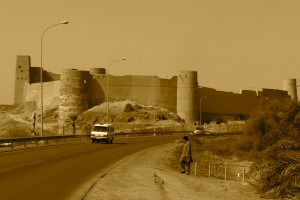 In the shadow of the 17th century Jabrin Castle, Moalim Salim welcomed us into his villa (essentially a mini-castle complete with parapets). We removed our shoes at the door and were ushered into the majlis where we folded our legs under us and sat on the carpeted floor.

Over tiny cups of cardamon-laced Arabic coffee, he showed us his hajahs and hars, the amulets he uses to exorcise djinn. The first step in an exorcism, he explained, is to cross reference the alignment of the planets and stars at the time he is contacted with the birth sign of the afflicted.

Once that is established, and with the help of his sacred book of Al Ghazali, it’s all a matter of balancing the four elements of earth, wind, air, and fire. “When they’re out of balance on earth, natural disasters occur, and as it is on earth so it is with those Allah made of clay,” he explained.

Moalim Salim has been practicing what he refers to as ‘white magic’ since 1970, after a distinguished military career. He undertook his apprenticeship under the tutelage of Sheikh Said bin Abdulaziz Al Ta’abi, who learned his skill from the book of Al Ghazali, the great book of knowledge whose influence in Islamic thought is eclipsed only by the Prophet Mohammed himself.

The power of the djinn

Moalim Salim claims to have helped over 5,000 people all over the Persian Gulf. Masoud Al Shikely was one, a man from Bahla whose granddaughter fell under the spell of a jini and who had episodes of fits and blackouts (we shifted uneasily as he continued his story). For a period of ten days, Masoud’s family was under siege with spontaneous fires breaking out and nightly showers of stones during which his granddaughter would blackout and convulse. 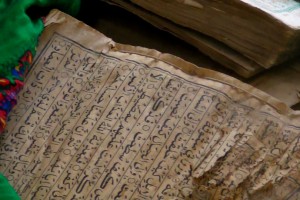 Old Quran at the Hill of Three Saints

When the burning of frankincense and the salt water baths didn’t work, an exorcism — guided by his own skillful hand and using the combined power of Quranic recitations along with the book of Al Ghazali — was finally able to free the little girl and the family from the djinn’s reign of terror.

We nodded in appreciation of the recounting, took one last sip of cardamom tea, and thanked him for his time. The next stop on our tour of the little village in the Omani hinterlands — the epicenter of all genies — was Bahla Fort.

Under the harsh rays of an Arabian sun, the iron door creaked as the gatekeeper opened it to let us into the deserted castle. From behind the milky whiteness of a cataract eye, he guided us to the area of the fortress where the djinn had been most wicked. All archeological attempts at restoration here had been repeatedly frustrated by an unseen force at night: stones erected and mortar plastered during the day would be found undone the next.

1400 years ago, a man was stoned to death by the villagers of Bahla for practicing wizardry.

Legend explains this phenomenon. 1400 years ago, a man was stoned to death by the villagers of Bahla for practicing wizardry. A fort was built on his grave to prevent his followers from turning it into a shrine. His spirit soon began to appear in the labyrinthine back alleyways of the village.

Rumors swirled that the murder victim was teaching others black magic from beyond the grave. Those who die by violence here are said to become djinn and haunt their place of death.

The scourge of the village

Whether the bewitched tree in the heart of Bahla’s old souq took root in the time of the wizard’s murder is unknown. The legend goes that if anyone not from Bahla touched the tree, they would be doomed to great misfortune and an untimely death. 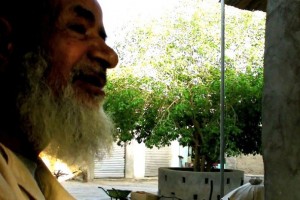 Old man and the magic tree

The tree itself is generally believed to have been a frankincense tree whose sap had been cultivated for millennia and used in religious ceremonies by the likes of King Solomon and Cleopatra.

It is still being used to this day by our local spiritual guide, Moalim Salim, to delve into the realm of the djinn, which the Quran describes as a parallel world of fire without smoke. What stands today in its stead bares little resemblance to the gnarled and twisted monster that spontaneously burst into flame when the locals, believing it to the scourge of the village, cut it down out of fear.

On the other side of the 12 kilometer fortified wall surrounding Bahla is an ancient cemetery of unmarked graves reflecting the austere heritage of Ibadhi Islam. During the Nabahina Dynasty (12th-17th centuries) when Bahla was the capital of Oman, three Sufi mystics took up residence here just outside of the city’s walls to practice their unorthodox sect of Islam, which included saint worship. 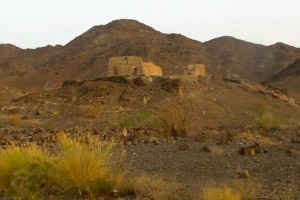 Hill of the three saints

These hermits — or saints, as some believed them to be — had tapped into the parallel world of the djinn. It was by this power that the now crumbling remains of the mosque in the middle flew from Rustaq, fully intact.

There from the Hill of the Three Saints, we watched the sun dip behind the jagged outline of the Hajar mountains. Gazing reflectively at the lengthening shadows stretching across the plain of unmarked graves before us, I felt what Carlos Castaneda must have felt after his first meeting with his curandero (spiritual guide), Don Juan, in the deserts of Mexico.

Wondering and wanting to believe in the real possibility of a separate, but seemingly legendary, reality.