View all travel news
Top Destinations
Top CitiesView All Destinations
Trending Regions
Trending Cities
Load More
Through the glass wall of the room where she was taking interviews, I could see Maria Muldaur look out toward the queue of journalists who were waiting for their turn.

I WAS IN that line. It was only three deep, but I could tell she’d had enough. She arrived on the island of Borneo from San Francisco the previous night and, coming from Vancouver myself, I knew well the painfully long journey she just went through.

It made me even more nervous to interview this folk-blues legend. She had a hit single in 1974, “Midnight at the Oasis” (which reached #6 on the Billboard Hot 100), and has been nominated for a handful of Grammy awards, including Best New Female Artist. She counts Bob Dylan among her good friends, growing up in Greenwich Village in the ‘60s while they were both still aspiring musicians.

I was in Miri to attend Borneo Jazz, an international jazz festival held in Malaysia, on invitation by the Sarawak Tourism Board. During a press conference, Maria made mention that while she isn’t religious, she is a spiritual person. This is what perked my ears up. 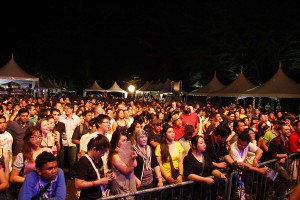 When it came down to the last two journalists in line, myself and Australian, Chris Lambie, she had us both go in together to avoid having to repeat herself in case we had duplicate questions. She was hungry for lunch. I was just hoping she didn’t eat us alive.

But she was thoroughly gracious and took time to answer our questions. I listened while Chris asked her questions, then it was my turn.

BNT: The online magazine that I edit has a heavy spiritual slant and I picked up in the press conference that you are a spiritual person, so I wanted to go in that direction.

Maria Muldaur: What’s the name of the magazine?

Brave New Traveler? I love that.

Thanks. I was curious about your spiritual practices and how you manage to maintain that with your lifestyle, being on the road.

Well…I multitask at all times. I call myself a transcendental Christian. By that, I mean I was raised Catholic but then kind of left that all behind and explored every kind of, what I call “new age mojo”…you know, Buddhism…not that Buddhism is new age, but, Zen Buddhism, Tibetan Buddhism, Yi Ching, astrology…everything. In the 60s it was wide open.

But then I had a reawakening, a reconnection to the source. It was through the teachings of Jesus, but I’m as far away from being a fundamental Christian as you can possibly be. What I do for my spiritual practices…I swim a mile a day and I’m in there praying and meditating. Well, I don’t meditate, my mind is way too squirrely to meditate, and people say, “that’s why you should meditate!” but, look, if I can just pray and try to get in the presence of divine mind, I’m doing OK.

My house is full of books, a lot about Jesus and the cosmic Christ, and I read a lot of Matthew Fox. Do you know who he is?

He was a Jesuit priest and scholar who couldn’t have been more immersed in the whole traditional format of Christianity, but he started following the train of thought of the Christian mystics, people like Meister Eckhart and Hildegard of Bingen. In other words, not just some new age stuff someone made up 20 years ago, this is a whole strain of Christian mystics a lot of whom are known as saints, who have this whole other view.

There’s a strain of Christian thought that got suppressed by the patriarchal mindset of the church fathers. Instead of being about, “we’re such miserable sinners…who don’t even deserve to live, and without Jesus dying on the cross, our angry father God would not forgive any of us.”…you think, who would even want to know a guy like that? let alone worship him.

That’s just the construct of man’s primitive mind, the idea that you have to appease an all powerful, vengeful God.

So instead of the focus being on original sin he wrote a book called Original Blessing and that’s what originally opened my mind up.

The original blessing is the blessing of life itself. He uses the writings of these various Christian mystics and people from other spiritual schools as well to put forth the notion that, instead of it being an angry, punishing father God, there’s also a Mother God that gives us life and already forgives and doesn’t require human or animal sacrifice to be appeased.

That’s just the construct of man’s primitive mind, the idea that you have to appease an all powerful, vengeful God. Unfortunately, here we are in 2011 and there are millions and millions of people of various faiths who still basically believe that God is some grumpy, negative force on high, just waiting for us to make a bad move and punish us.

There seems to be a growing movement where people think we’re about to have an awakening as a human race. 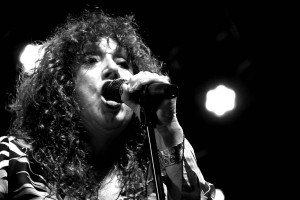 There is. The second coming of Christ isn’t about Jesus floating down from the sky in a robe and a pair of Birkenstocks to say, “you, you, you, and you, come with me. The rest of you, you blew it.” It’s the awakening of the Christ consciousness on the planet. And what is Christ consciousness but a consciousness of oneness, with each other and with all of life and with God and the source, or whatever you want to call it.

It’s a neck and neck race though. Are enough people going to wake up? My godfather was an immigrant from Sicily, my dad’s best friend. He was a rosicrucionist. Do you know what that is?

You’re with a spiritual magazine? You better be writing this down. (Laughter.)

It’s a mystical order. They were Christian-based but higher metaphysically, they were somehow related to the Masons I think. Early on, I didn’t just have some old Italian guy smoking a cigar as my godfather, I had a guy that was really this mystical teacher.

So I’ve been reading this kind of stuff for years. There is going to be an awakening and as horrible as the BP thing was, unfortunately mankind needs huge blows to the head to even begin to wake up.

You talked about your own awakening before. Can you talk more about that? Was there an event for you?

It takes a lot out of me to talk about this, but…my daughter was in a near fatal car wreck in 1979 and it coincided with Bob Dylan’s Slow Train coming out. He had just become a born-again Christian. I didn’t know what that was.

You know, you can sing sex, drugs, rock ‘n’ roll, death and angst, but sing about God and people are starting to throw tomatoes.

I just heard his album once…I was sitting in the hospital, with Jennie having a 7-hour operation…she just nearly escaped. She was only 13. I was just freaked out.

And the words on his album kept going over and over in my head and it just kind of woke me up. I got to see him shortly thereafter; he came to San Francisco and was being booed offstage. You know, you can sing sex, drugs, rock ‘n’ roll, death and angst, but sing about God and people are starting to throw tomatoes.

I sent him a very supportive and encouraging letter saying, “look, I was there the day they tried to boo you off the stage in Newport when you went electric. They’re not there yet, they’re just a little in shock. But hang in there, because what you wrote really ministered to me.” And I told him the little story and he was very heartened about that so we shared a lot around that time…he was very encouraging.

That was the beginning of my awakening. And so I said, “well, what should I do now, now that I’ve woken up and received the holy spirit?” And he said (here she switches to a Bob Dylan impersonation), “you gotta read the bible.” And I went, “no, not the bible! I can’t get through it.” And he said, “no, if you read it, it will reveal itself to you.”

And he was right about that. I plodded along with that for a couple of years when I saw this book [Original Blessing] — it really opened the layers of the onion that are still unfolding. I saw that the construct of official Christiandom was really rigid. I was able to absorb the spiritual power of the message without all the dogma.

As Maria finished her last words, she rose from her chair indicating the end of the interview and the beginning of lunch. We thanked her and all walked down the stairs to the hotel’s buffet table.