“Life is a series of natural and spontaneous changes. Don’t resist them; that only creates sorrow. Let reality be reality. Let things flow naturally forward in whatever way they like.
– Lao Tzu

Greetings future explorer of the world! In this post we will be introducing you to Spontaneity and his mischievous cousin Serendipity. They have faithfully accompanied many great explorers throughout the ages, and we can guarantee that befriending these two on the road is bound to lead to unexpected wayward adventures and happy coincidences.

Inspired by guerrilla artist Keri Smith’s delightful book How To Be An Explorer of the World, and also some of the wonderfully creative ideas listed in the Lonely Planet Guide to Experimental Travel, we have compiled a short, illustrated field guide with seven ideas we hope will encourage you to succumb to your spontaneous urges, adopt a healthy caution against over-preparation, embrace serendipity, shed the heavy cloak of routine, chase down happenstance, and invite chance to be your chaperon. 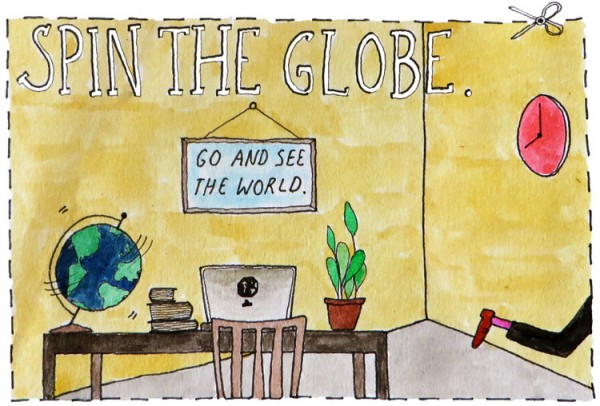 The timeless ‘spin the globe’ technique is one of the best-known methods for inducing spontaneous travel and is wonderfully demonstrated by James McAvoy playing Dr. Nicholas Garrigan in the 2006 film The Last King of Scotland. Committing to travel to the first place your finger lands on takes a whole lot of ‘cojones,’ so for first timers we would recommend giving yourself three strikes — two practise spins if you will — before committing yourself to actually going to the country your finger lands on.

For added panache, we would suggest first pouring a glass of single malt whisky and spinning one of the rather fine hand-painted globes from the talented team at Bellerby & Co based in London, England. 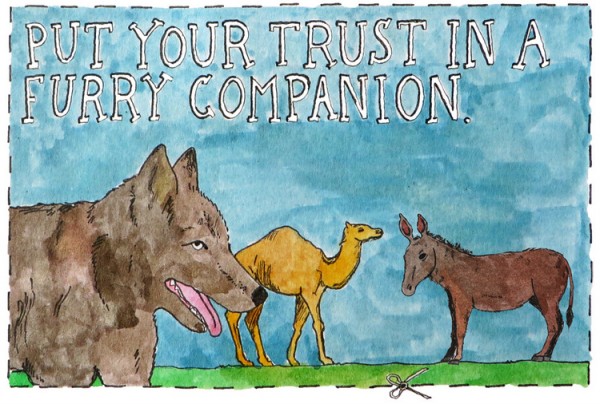 2. Put your trust in a furry companion.

If you live in an urban area, either take your own dog or ask to borrow one from a friend. If, however, you’re living in Central Asia, perhaps you might consider commandeering a yak. In Western Africa? Try a camel. In the Australian bush? Jump on a kangaroo…you get the picture. Whichever your mammalian companion of choice, turn the tables and let it take you for a walk, you never know where you might end up! 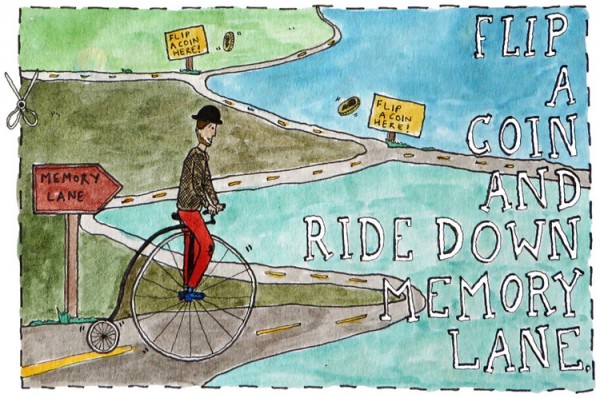 3. Flip a coin and take a trip down memory lane.

This is one for the whole family, and perhaps your elderly neighbours too. Politely ask them to dig around for an old half-penny coin (or equivalent out-dated coin depending on your homeland), perhaps a vintage travel guide (such as one of these), and if you really want to commit yourself, a vintage bicycle or penny farthing from an antique store — complete with a set of retro trouser clips.

Once your intergenerational team has rounded itself up, set off down your local road at a moderate pace and at each junction take it in turns to flip your coin. Heads = go left. Tails = go right. Repeat this process for an afternoon, and along the way ask each other about memories from each place or junction — what did these places look like 10 or even 20 years ago? What has changed and what has remained the same? Enjoy the leisurely ride down memory lane. 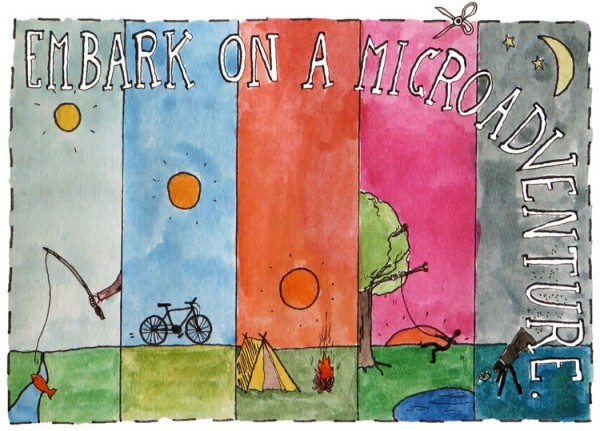 4. Embark on a microadventure.

Surely you’ve heard of Al Humphrey’s microadventures by now? His premise is simple: You don’t need to fly to the other side of the planet to find wilderness and beauty — adventure is only a state of mind. Anyone can embark on a microadventure. Simply put the kettle on, pick up a map, and find somewhere rural you’ve never been to, despite it being close by.

After work, jump on a train or cycle there. Sleep under the stars on a hilltop, swim in a river, wake up in the sunshine. Return to your desk, a few twigs in your hair but happy to the core. 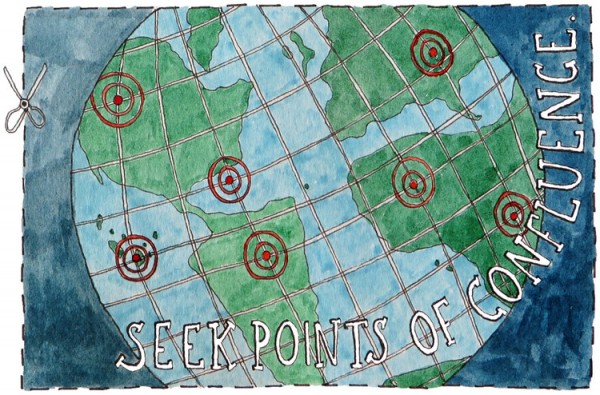 These confluences are interesting because they represent the randomness that emerges from strict order. Seen another way, they are an open defiance of the order our culture imposes on us. As author Tim Vasquez says, “[Points of confluence are] curious places that embrace you in their history, character, and ecology, surrounded by people who are locals in every sense of the word.” 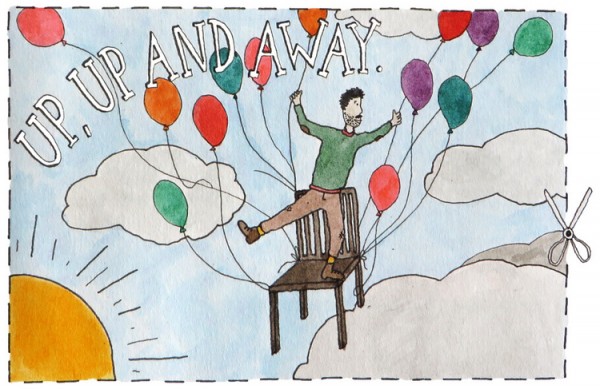 This idea was pioneered by the legendary Larry Walters, whose spontaneous misadventures inspired the Pixar classic UP. We do not advise that anyone actually attempt this at home, but Larry’s story is so spectacular we felt obliged to include it in this compendium. Larry was an American truck driver, who on July 2, 1982, took flight in a homemade airship named Inspiration I.

His beautiful “flying machine” consisted of an ordinary patio chair with 45 helium-filled weather balloons attached. It was reported that Inspiration I rose to an altitude of over 15,000 feet and floated from its takeoff spot in San Pedro, California, into controlled airspace near Los Angeles International Airport. Slightly safer alternatives to Larry’s method would include paragliding or attaching a GPS to a helium balloon and following it with your feet placed firmly on the ground. 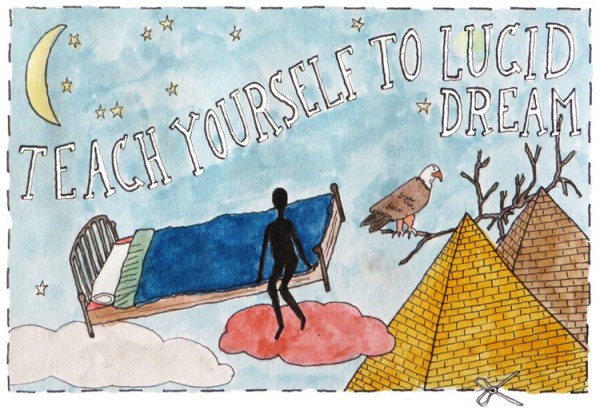 7. Teach yourself to lucid dream.

Lucid dreaming is simply being conscious that you are dreaming. Tibetan Buddhists have practised dream yoga for centuries, and there’s a lot of literature behind the art and science of lucid dreaming — we found the simplest methods outlined in a post on the 4HWW blog. It requires a lot of practise to master lucid dreaming in the beginning, but once greater control has been developed, you can use your normal hours of REM sleep to visit anywhere in the world.

Quit your 9-5 job to fly over the Egyptian pyramids on the back of a giant eagle — check. Explore the depths of the ocean reefs without an oxygen tank — check. Base jump from Mt. Everest with Barack Obama — check. As with most things in life, the only limits are those imposed by your own imagination — have fun!

This post originally appeared over on the Maptia Blog; the team at Maptia have just launched their beautiful platform for telling stories about places.