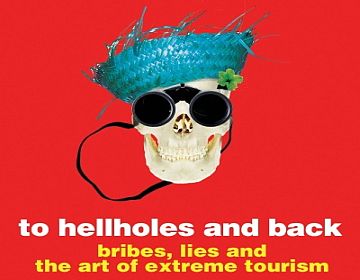 Chuck Thompson is without a doubt, a funny guy. I recall sitting in the Northstar Resort at Lake Tahoe, reading his first book, Smile When You’re Lying,

because one, I don’t ski, and two, I had horrible, horrible cramps.

His anecdotes about the insane world of “it better be positive!” travel writing made me laugh out loud in the middle of feeling as if I were birthing a child and about 50 kids running around screaming as if they were being abducted (it was lunch time). Impressive, indeed.

I was therefore naturally excited to get a copy of his latest, To Hellholes and Back: Bribes, Lies, and the Art of Extreme Tourism.

On the whole, I wasn’t disappointed.

Thompson’s certainly got a knack for intertwining details of his adventures with his thoughts on the situation he finds himself in – or one that somehow at least in part relates to it – in a way that keeps his writing snappy. Complete flow, no; mind continually perked up, yes.

This time around, he decides to tackle places in the world best known for their atrocities, pushy salesman, and mangled killings. And I’m not just talking about Disney World, the last and most feared destination on his expedition. The Congo, India, and Mexico City also made the list, a tour de force à la Eat, Pray, Love, only with snarky commentary and well, not a hint of spirituality.

Thompson raises a glass to Mexico City for being the exception-to-his-rule that “there’s no such thing as a good drinking town.”

In Hellholes, Thompson derides India for kicking a person into “‘get the fuck away from me’ survival-mode tourist asshole you’ve always promised yourself you’d never become,” and raises a glass to Mexico City for being the exception-to-his-rule that “there’s no such thing as a good drinking town.” You get the drift.

I’ve been to Zambia (which somehow gets an even worse momentary spotlight than the Congo) and therefore engaged with some of the corruption Thompson painfully recounts during his month in the DRC (thank God my experience wasn’t that bad). This sums up my only real concern with the book – I wish to warn those who are particularly sensitive to certain views of the world (i.e. developing world good, developed world BAD) to stay away from his work.

As Pam Mandel noted in her review of Smile, he treats realities such as sex tourism, and in Hellholes, perceived notions such as earth-connected Africans – in the “protected” Luki Biosphere Reserve of the DRC, Thompson and his haphazard group of guides, haltingly dubbed Team Congo, “hear the rhythmic sounds of chopping wood and encounter dozens of locals walking in the opposite direction with bundles of wood on their backs” – with great irony and no holds barred.

By the way, if you really think villages are so great, spend a year in an African one and see how you like starving, washing in a river the guys upstream dump their shit in, and having your neighbors up your ass seven days a week.

You are bound to get pissed off at some of the things he says. I’m pretty sure he wouldn’t have it any other way.

Living to the Extreme 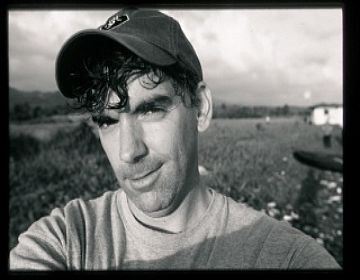 But if you want a dose of reality about both culture and place to go with your travel glossies (of course, the market has changed dramatically since Lying; there is now much more “real” travel writing available on the web and in certain travel magazines, from Matador to Wend), Thompson is here to break it down for you.

This concept of “extreme tourism,” where we put ourselves in danger for the adventure, the rush, or simply to get to brag that we survived, is an interesting one. Thompson understands this well – he gets that these particular “hellholes” are defined that way by the media mostly because they are so different from what we know, from our Western ways. He writes:

…Anything that gets the traveler out of his or her comfort zone, or forces them to challenge their belief system, fits a fluid creation.

Or, as is the case with Mexico City, the hype is based on fiction or the past, with rumors that citizens will react alarmingly upon being approached on the street because they are afraid you will kidnap/murder them being scoffed at by locals when such a predicament is put forward. Our media certainly likes its black-and-white, we-decided-this-is-drug-induced-hell-years-ago-and-we’re-sticking-to-it tactics.

It’s a Small World After All

So what exactly is the point of this book? Well, of course it is to show these places aren’t as bad as they are made out to be – it would have come as a shock if Thompson said, “Yep, they are actually shittier than I thought they would be. I can’t believe I made it out alive.” But beyond blasting the fallacy of “extreme tourism,” the theme of a connected human nature shines a dim yet constant light.

Only problem is these are parts of human nature that Westerners aren’t always comfortable looking at within ourselves. Here’s my favorite summary from the book, a quote from a Peace Corps volunteer Thompson interviewed:

Africa is a human nature stripped to the raw bones; life at its most basic. You find a lot of human traits out in the open there that we prefer to hide – sex, violence, love, hate, sickness, strength, greed, compassion, sadness, humor. It’s all right there, and this is what makes it both attractive and repellant to Westerners.

The same can be said for the pushy salesman of India, the kill-or-be-killed soccer fanatics of Mexico City, or the escapist mentality of Disney World. These are all examples of human nature at its most raw. Best be ready for them if you plan on stepping out of our moderately repressed Western world, but no need to think you are going to be gunned down (or Micky Moused) in the process.

Oh, and Thompson’s tangental as hell. But so am I, so I kind of dig it.

What do you think about the idea of “extreme tourism”? Share your thoughts below.