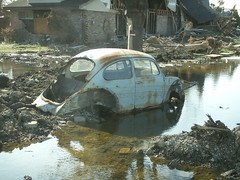 Coupled with the city’s old bag of tricks is a new draw card: the chance to glimpse New Orleans’ destruction firsthand.

But New Orleans isn’t the only place where suffering has turned into a tourist attraction. In New York, Ground Zero is the iconic memorial to the September 11 attacks.

Outside the United States, places like Auschwitz and Cambodia’s killing fields have been drawing tourists for decades.

The practice of visiting sites related to death and suffering is known as “Dark Tourism.”

Dark tourism is not a new phenomenon. Scholars see parallels in such historical activities as gladiatorial contests in Ancient Rome, public executions in the Middle Ages, and guided tours of morgues in Victorian England.

Is it right to turn other people’s death or misery into a spectacle? Why are humans even attracted to morbid places?

The Benefits Of Dark Tourism

Like any tourist attraction, “dark sites” can turn a handsome dollar for those shrewd enough to capitalize on the site’s popularity.

But does the commercialization of dark sites necessarily mean that we travelers should avoid visiting them? Not quite.

Often, the countries or cities featuring dark attractions are in great need of tourist dollars.

Take New Orleans for example. After Katrina, the city’s tourism figures have dropped to about 35% of what they were in 2004. A surge in tourism is vital if the city is to successfully rebuild.

“Nobody realizes, [Hurricane Katrina] destroyed seven times more than Manhattan. It was larger than the size of Great Britain. This is two years later. We have to show it. At first, people feel guilty to say they want to see the tours. After, they’re amazed at the destruction that’s there after two years, and the size of it.” 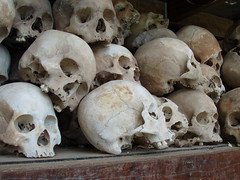 Dark tourism puts you face to face with some of the most painful and frightening aspects of human existence: genocide, natural disasters, terrorism, slavery.

As much as our society may tout its historical “progress”, it has not seen the end of any of these grave evils. By raising our awareness of horrific events in the past, dark tourism guides us to a sobering understanding of the world we live in.

Earlier this year, Rolf Potts wrote about a trip into New Orleans’ Lower Ninth Ward, one of the areas worst affected by Katrina. He described it as a “vividly, irrevocably authentic” experience.

While much of modern tourism is simply about recreation, dark tourism is different.

Rather than offer you a few hours of entertainment, it ought to provoke and confront you in a profound way. It is a multi-dimensional experience that can have a deep impact on your life.

It is a multi-dimensional experience that can have a deep impact on your life.

With crafty expertise, the tourism industry creates our holiday for us. Some holidays require about as much interaction as watching a movie – just hit play and watch the scenery unfold.

The appeal of dark tourism is not that we get away from this kind of scripted travel. It’s just that the script is a whole lot more confronting.

The Choice to Bear Witness

Whether we choose to witness dark tourism in this profound way is another matter. Dark attractions are often also famous attractions. It’s easy to let them become mere spectacles – like the Eiffel Tower or Sydney Opera House.

But if dark tourism is little more to us than entertainment, surely we are disgracing those whose suffering, past and present, has become a “spectacle”?

If you’re thinking about visiting a dark attraction, ask yourself why you want to visit.

Do you genuinely want to honor and learn about the victims whose lives and deaths are commemorated at the site?

Or is it just an attraction to you – a way to be entertained?

Frankly, if entertainment is all you’re looking for, in my opinion you should spend your tourist dollars elsewhere.

I hear Disneyland is a lot of fun.

Eric Daams has lived in the Solomon Islands, Netherlands and Micronesia, but these days he calls Australia home. He is the editor of Travellerspoint and enjoys hunting down spammers, reading about people’s travel adventures, and writing for the Travellerspoint blog.

What do you think about “dark tourism?” Share you thoughts in the comments!

These destinations are open to US tourists this winter
How to plan for 2021 travel in the age of COVID, according to 23 travel agents
Everything Americans need to know about traveling to Mexico right now
7 countries you can’t enter if you have a DUI
13 airports where you can get tested for COVID-19 in the US