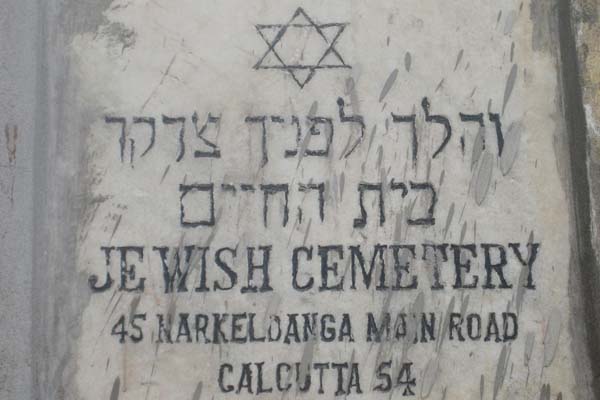 Robert Hirschfield finally tracks down the youngest Jew in Calcutta and talks to him about his work.

I AM STANDING OUTSIDE the clinic on Free School Street, watching him approach in his baggy black pants like spent parachutes. I am thinking, so this is what the likely last Jew of Calcutta looks like. Slightly ungainly, room inside his clothes for strays.

What makes the youngest Jew in Calcutta the oldest? His being closer to death than anyone else.

Shalom Israel is thirty-eight. Almost everyone else in Calcutta’s Jewish community, which numbers under forty, is in their seventies, eighties, or nineties. Israel lives in the Jewish Cemetery (the community built him a house there), where he cares for the graves.

When I first heard that, it sounded almost like a riddle: What makes the youngest Jew in Calcutta the oldest? His being closer to death than anyone else. I’d been trying all week to get him on his cell phone. He apologizes for not answering. I am tempted to ask, what does one have to do in a cemetery that can’t wait? 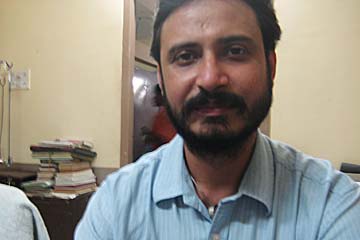 He is at the clinic to do another of his jobs. A ninety-year-old woman has fallen and broken her femur. He has come to take her to a second clinic with the Xrays from the first. “I can talk for a minute,” Israel says. I begin by asking him about his third job.

“You perform the tahara (the ritual washing of dead bodies before burial) on the men who die. Isn’t that hard psychologically on someone who is still young?”

“Not really. It was hard for me when I first began assisting my father, who also performed the tahara. I was sixteen then. Now I am used to it. I see it as an important spiritual act that I do for the community.”

I imagine an invisible needle knitting together this Jewish death ritual and karma yoga. I see him as the ground of convergences, but socially stranded. He is unmarried, and unless a Jewish woman from somewhere floats into his death-defined orbit, unmarriable. I doubt if he dates. If a woman were to ask him where he lives, what would he say? If he were to suggest they go back to his place, what would she do? 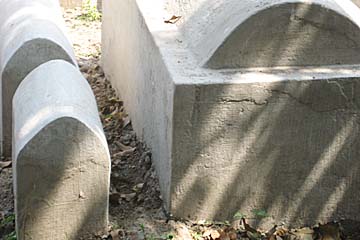 He doesn’t find living in a cemetery at all strange, which is both weird and endearing. “It’s not the dead that do us harm in this life,” he explains. “It’s the living.”

He disappears inside the clinic and comes out wheeling a tiny, trembling woman, white as a snow crane. Waddling out into the killer traffic, he hails a hand-pulled rickshaw and lifts the old woman on to the high seat as if she were a bag of eggs.

My eyes say to Shalom Israel, “Is this going to work?” His eyes answer, “It better.” I gasp as he trots alongside the rickshaw. Then, I relax. Israel is a man who sees his community crumbling in his hands. He is not like you or me.

Notes From a Red-Light District, Calcutta

Notes From The Blue Sky Café

Even Sadhus Get the Blues

Notes on a Girl Walking the Tightrope

Notes on The Calcutta Metro