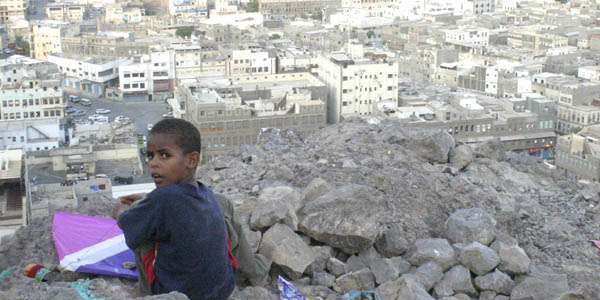 On a visit to Yemen, Sarah Shourd is invited to an enlightening dinner with an Iraqi family.

It’s a few minutes before 6 and the light in the port-city of Aden in South Yemen is beginning to fade.

As the sun sinks behind jagged cliffs the city takes a deep, full-bodied breath. Its mouth opens wide, its lips stretch thin and like a great, harmless beast it sucks all the people into its warm, concrete belly.

In seconds the streets are empty. Steel-doors are bolted shut, soccer games cut short and kites quickly pulled from the sky. Women disappear into their homes and men duck into small, crowded restaurants.

No dark clouds mar the gray sky; no sound of thunder threatens in the distance.

The population of Aden is driven indoors by the sound of dozens upon dozens of loudspeakers. Mosques scattered across the city’s face erupt into a kind of song that is not music or chant, not beautiful or ugly but awesome and commanding.

From my birds-eye perch 500 feet up on the backbone of an extinct volcano the locals call Crater, the sound is deafening. It ricochets off Crater’s walls and collides in my inner-ear like a great, booming storm, “God is great, God is great. I bear witness that there is no god but Allah.”

It is the evening call to prayer.

The Power Of Faith

It’s Ramadan, the 8th month of the Islamic Calendar, Muslims all over the world are demonstrating the power of their faith by exercising restraint.

Aden is like an Arab version of Coney Island: A city by the sea that never sleeps, awash with spectacle and surprise.

In Aden people are taking their first sip of cool water since dawn. They are enjoying special treats like breaded balls of soft potato, creamy pudding, crispy meat-filled samosas and soft, sugary dates.

Muslims not only consume nothing during daylight hours for one month, they also do their best to resist illicit thoughts and behavior, read the entire Koran and act generously toward those who have less.

Men wipe the crumbs from their lips, rinse the grease from their hands and head for the mosques.

City By The Sea 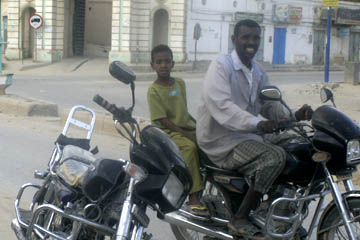 Aden is like an Arab version of Coney Island: A city by the sea that never sleeps, awash with spectacle and surprise.

During Ramadan it is common to shorten the fast by staying up late; in Aden the typical bedtime is 4am. All night people squat around platters of food, boys play pool in the street and half-naked old men pose like cats on small squares of cardboard.

I meet Nada while traveling on a bus on the first day of Ramadan. As we traverse a rocky, green landscape the passengers begin to arrange food on the small, plastic tables attached to the chairs in front of them.

When the sun is no longer visible behind low cliffs, a dispute breaks out when two passengers start eating and others say it’s too early. Someone yells to the driver to turn on the radio and all doubt is assuaged when the call to prayer comes crackling over the airwaves.

Everyone hands around a little of what they’ve brought, a disproportionate amount being heaped on us. The bus is soon alive with chatter and shouts of, “Ramadan!” and “God is generous.”

A middle-aged woman in front of us turns to my friend and asks him about the book he is reading. It’s called, “The Shia Revival.” She wants to know why an American is reading this book.

“You have questions about Shia?” she asks, “I can tell you the real story of the Shia.”

Nada is an Iraqi engineer who moved to Yemen 7 years ago with her husband and two sons to escape Saddam, who openly despised the Shia sect.

They left behind a house they were slowly building on the banks of the Euphrates in the center of Baghdad. Saddam feared that as the Shia majority might someday overthrow him and his Sunni-dominated government, so he robbed them of political power and killed them by the thousands.

Saddam feared that as the Shia majority might someday overthrow him, so he robbed them of political power and killed them by the thousands.

They had to leave Iraq, Nada explained, but little did they know it would soon become far more dangerous and that their family home would be blocks away from the Green Zone.

There are 12 identical unmarked apartment buildings lined up on Nada’s block. A kid helps figure out which one is number 10. When we knock on her door the urgency in her voice pulls us inside:

“How did you know the building?” she asks.

“Which boy?” she shoots back.

She has reason to be uneasy around Americans. She later confides that her son yelled at her that afternoon, “The Americans occupy our country and now you invite them to our house!”

They guide us into their living room where we sit and watch while she and her sons bring out plate after plate of Ramadan treats.

Shortly after we begin eating the conversation turns to the war. They explain that since the Occupation, they and their Sunni neighbors have been pitted against each other. This bitterness didn’t exist under Saddam; now Iraqis are killing other Iraqis for the first time.

“It’s Not Your Fault” 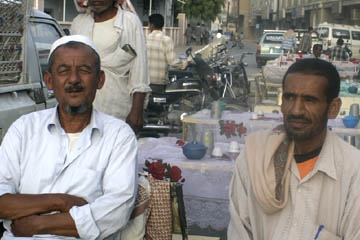 They went back to Baghdad to visit family in 2005. Her youngest son, Riyad, was seized by American soldiers during a raid. They held a gun to his head and threatened to kill him.

Somehow they were able to get him out alive but his family is still very protective of him. He is the only one in the room who doesn’t speak English and is exceedingly jealous that his handsome older brother is getting more air-time.

Nada pleads with me to try and speak Arabic with him and I somehow get out a few, hard-earned sentences.

At that very moment, amidst all the commotion, it dawns on me that this is my first time sitting around a table with Iraqi people. I tell them that everyday I feel ashamed at what my country has done to their country.

“It’s not your fault,” they say graciously, “we know your government doesn’t listen,” but then a silence falls that none of us can resist, each steeped in our own thoughts.

But Riyad can’t bare the somber mood for long. He’s soon clowning around, quizzing us on American pop-culture. He teases us because we don’t know the name of the recent American Olympic multiple-Gold-Star Medalist, Michael Phelps.

I’ll Come Back to Yemen

The white, sandy beaches just outside of Aden are colonized by thousands of crabs. Transparent and swift, they weave and dance along the calm, blue coast.

From war-torn Iraq to the hot, languid streets of Aden, people are keeping the same traditions alive.

The next morning I wake up to the sound of the sunrise prayer blasting through my window. I step out onto the balcony and see dozens of men walking almost single-file towards the mosque.

Breathing in the quiet beauty of dusty streets and turquoise-domed mosques, I picture similar scenes replicated all over the world: sunrise over empty streets, loudspeakers blaring the call to prayer, men trickling into the mosque.

Ramadan knits countless communities into a tight fabric; communities that would otherwise have little else in common. From war-torn Iraq to the hot, languid streets of Aden, people are keeping the same traditions alive.

I watch the men emerge from the mosque and head home to sleep, then I turn my back to the sun. A new day of Ramadan has begun.

The top hotels for extravagant floating breakfasts and how much they cost
The 25 coolest towns in America to visit in 2021
How to plan a cheap, last-minute vacation to Martha’s Vineyard
Monaco is more than a millionaire’s playground. Here’s how to visit on a budget.
11 magical Airbnbs near the towering trees of Redwoods and Sequoia national parks

How to plan a cheap, last-minute vacation to Martha’s Vineyard