“I know of no other advice than this: Go within and scale the depths of your being from which your very life springs forth.” – Rainer Maria Rilke, February 1903, Paris

This quote reminded me of our generation back in 2011—young and on the edge of a new world. I smile when I look back at us, vibrating with excitement, trying to shape the society that was emerging. Those days were precious. Hard. The best times of life.

For the 50 years leading up to 2011, scientists warned of nuclear proliferation, an exploding population, runaway corporate power, species loss, deforestation, economic and ecological collapse, and widespread famine. For the most part, our society ignored them. We razed our forests, over-ﬁshed our oceans, over-cultivated our land, and poisoned our fresh water with toxins, oil, sewage.

Quick, radical, peaceful change was vital. Humanity turned to a younger generation to drive that change.

Many of our brightest thinkers questioned whether our species would survive the century.

Quick, radical, peaceful change was vital. Humanity turned to a younger generation to drive that change. We were the largest, most connected, most informed, most diverse generation in history. We were the spawn of globalization, rapid technology change, connectivity, environmental destruction, and global crisis. We had more questions than the authorities (or their systems) could answer. We were old enough to vote and young enough to be idealistic. We were digital natives. We came from all countries, and we were ready to create mass social and cultural change.

It all started with media. We were connecting to each other – constantly. Through our social networks, we began making media that reflected our values. The Internet and technology democratized the means of production and we used media to generate an inclusive culture of independent thinking, cultural alternatives, progressive politics, racial integration, art, music, creativity, intelligence, and peace.

As the years went by, our interconnectivity fostered new, powerful collaborative forms of thinking. Back then, crowdsourcing and the instantaneous cross-fertilization of ideas was a new phenomenon. Decentralized, horizontal social organization was just beginning to be discovered and explored. The Internet was not simply an innovation in information technology and communication; it sparked a profound cultural shift similar to the cultural revolutions of the Renaissance and the Age of Enlightenment. 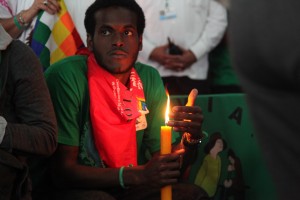 Activism was redefined and widely adopted as a common social practice. With the help of technology and social media, democracy was galvanized. Thanks to online and mobile voting, 95% of the voter population participated in elections. Citizen-led decision-making groups were formed, fostering widespread collaboration between the government and the people. Top-down, hierarchical government gave way to lateral, self-policing communities—built and maintained by the people who live in them. Economies and food production were localized, folk culture invigorated.

When wide spread sharing and online community organizing took hold, we collectively realized we had been making a false assumption about human nature. The neoclassical presumption that people were selfish—and acted strictly on personal and financial motivation—was wrong.

The social, economic, and political structures we built based on this assumption created systems that provided individual freedom but not a lot of resources for the greater public good. Collectively we broke those beliefs and ushered in a global, civic culture that changed the way of life on our planet. We created new systems that assumed people would act in ways that created public value.

Our global community has changed much since those youthful days of fleeting exuberance and passionate toil. Our deep inclinations that a better world was within our reach—they were true. As a generation, we were given opportunities to start behaving in a new way, and we did. The global youth came together with a sense of membership, belonging, duty and purpose.

We had much to gain and little to lose from experimentation so we began to positively deviate from the norm of civic passivity. We woke up and, perhaps for the first time in human history, we had the collective power to steer our planetary destiny towards something better, healthier, kinder, and more peaceful.

Looking back now, our most difficult problems were social, political, personal. What brought about the transformation of our generation from a civic audience into an active public was our ability to, individually and collectively, imagine a new story. Gen Why – you have a profound and enormous opportunity before you, and so I offer you this advice:

Love each other and manifest the dream.