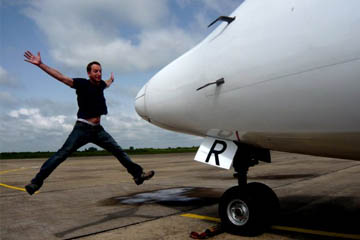 Our Fokked Up Fokker 50. When a replacement
plane finally arrived, it broke down too.

The Nigerians on board the flight from Dubai to Addis Ababa were losing their minds.

Pushing, shoving and screaming at each other at the check- in counter, one woman ran her overloaded trolley directly into my legs, another woman shoved my back while waiting in line at security.

There was nowhere for me to go, Dubai Airport – now officially my worst airport in the world – was slammed from all sides, yet both women were unapologetic.

Then, our names weren’t on the e-ticket list. Then, someone forgot to tell someone something and no one knew nothing about anything. Then, we finally rushed to board the plane.

Then, a fight broke out a few rows down, and women started screaming at each other, and babies started crying. Then, the plane sat on the tarmac for an hour.

Then, we took off, and Ethiopian Airlines served up curry chicken, and the pretty flight attendants, battered by verbal abuse, somehow managed to smile at me, and then I realized that I was returning to Africa, and I better get used to it.

Fortunately, and with no disrespect to Nigerians in general, 98% of the plane continued onwards to Lagos, depositing us in the alliterative capital of Addis Ababa .

Ethiopia does more than follow its own Christian calendar (the Julian, as opposed to our Gregorian), they also tell the time differently, with 12 hours of day, and 12 hours of night, so we arrived at eight, but it was really two. Thus, I arrived in the country a full seven years younger and ahead of my time.

The Greeks called this the Land of Burnt Faces, a politically incorrect term that has nevertheless given the country its name.

Our luggage, on the other hand, took an hour to make its way to the conveyor time, or, if you prefer, just a few minutes in Africa Time.

Oh Africa! Birthplace of Humanity, Land of Beauty, the Place that Progress Forgot (or at least, Overlooked).

Addis was still aglow with festive colored lights, its roads wide and dusty, snaking through tin shacks and creaky wooden scaffolding, holding up leaky cement construction. The Greeks called this the Land of Burnt Faces, a politically incorrect term that has nevertheless given the country its name.

It is one of only two countries on the entire continent that has proudly never been colonized, but it is also a highway lined on either side with war and famine – the tragic car wrecks of history.

Speaking of which, there was no time to explore the capital just yet; an early morning flight was ready to take us north, to incredible rock churches that have survived from the ancient kingdom of Lalibela. 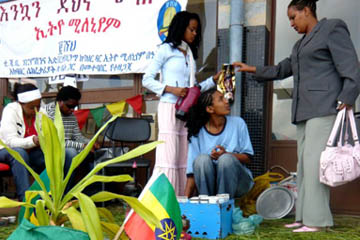 Ethiopia is the birthplace of coffee, and the coffee ceremony
is taken slowly, and seriously.

As if. Cars break down, boats break down, I’ve been on a train that broke down, and a gondola once got stuck too.

So it came as no surprise when the twin-prop Fokker 50 took off after a quick stop in Bahir Dar, circled over Lake Tana – the source of the world’s longest river, the Blue Nile – and bumpily landed again. The plane had broken down.

So the passengers, made up of adventurous international tourists, Rastafarians, and a few locals walked into the airport to be served up coffee, bread soaked in berbere sauce, and rain drops of misinformation from the airline. It was the weather, no, the weather instrument, no, we’re not sure, more coffee?

Five hours later, a replacement plane arrived, but unfortunately, it broke down too.

I didn’t mind so much, because one of these fokking Fokkers was bound to go down, and my bet was the one that “suddenly” fixed itself.

The airport toilets didn’t flush and there was no water, but I sat through my first Ethiopian coffee ceremony (which can take an hour) and unplugged the cafe fridge to do some work on my laptop.

Three hours later, an unmarked Fokker arrived to the cheers of the by-now somewhat irate passengers.

Then the airport staff, with whom we’d be mindlessly bantering with all day, turned all professional and emptied our bags as a security precaution, barred us from going outside, and wanted the tape from my camera guy Sean’s camera.

It was all rather odd, but eight hours later the plane took off, and, where was I, yes, back en route to the ancient kingdom of Lalibela.

Next week: Tuning into your Indiana Jones