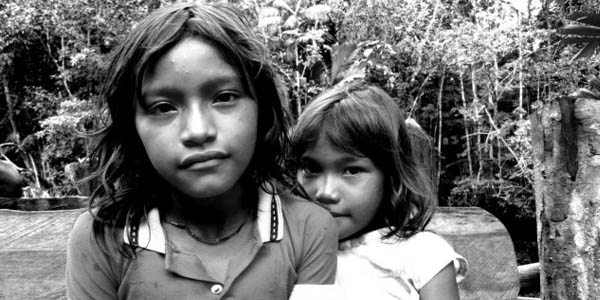 Jakera (hello) to the shy, beautiful sisters who live with their parents near our small camp jungle camp / Photo Robin Esrock

Deep in the jungle, Robin Esrock discovers religious influence, and has his own spiritual moment with dolphins.

According to the overweight missionary with braces, Jesus was coming to save me tonight, deep in the heart of the Orinoco Delta.

Not an emissary mind you, but Jesus himself, and he would save me, and save the primitive Warao people, because even though we’re quite happy (me the travel writer, them the indigenous people of one of the world’s remotest jungles) she knew, she just knew, that he was coming tonight, not in spirit, but in person!

I thought about the practicalities of this second coming, and made a fair attempt at some intelligent discourse, but when faith blinds people, it robs them of more than just vision.

We’re both using these people, this place. I came to learn and write, they came to convert.

“Do you know much about the Warao way of life,” I ask, “their respect for nature, the gods that make sense in their lives, as opposed to the god that makes sense in yours?”

“Oh, they practice witchcraft, but in their heart, they love Jesus,” she replies, my words bouncing off her head like an over-inflated soccer ball.

The Warao, it seems, will find Jesus whether they want to or not.

What is the difference between these blissed out misguided missionaries, followers of a 2000-year old Middle Eastern guy/Son of God named Jesus, and me, a gringo with a camera taking pictures in an exotic world that doesn’t want nor need me?

We’re both using these people, this place. I came to learn and write, they came to convert.

And stuck in the middle: fragile, timid, lacking ideological filters and completely vulnerable to religious, cultural or physical attack, are the People of the Canoe – the Warao of northern Venezuela. 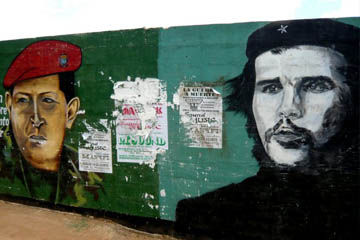 I’m going to row the boat back, paddle to the start and a frenetic arrival in Caracas, where graft is thick and with a few dollars one can skip the immigration line-up altogether.

It was immediately clear that, although the official currency is the Boliviano, this was not Bolivia. The airport was big and new and when you have the fifth largest oil reserves in the world, money counts for something.

Just don’t use the banks. They’ll give you a 2000 to 1 exchange rate, whereas just about anyone you talk to will gladly give you around 3200 to 1. The black market thrives, 70% on the dollar, despite the best efforts of president Hugo Chavez, of whom I’ll return to later.

There was no time to join in the fun of Caracas on a Friday night. Into a van, and we’re off to the north, a six hour bus ride to a beach town called Playa Colorado, and from here a further five hours (hopefully) to the world’s second largest delta, the Orinoco.

After spending time in La Paz, I was desperate to get out the urban jungle and into a real one.

The six lane highway slowly turned to four lanes, and finally into two. It was 11pm, I’d been in transit for 16 hours, but the journey into the jungle was only beginning.

It reminds me of northern Brazil – the coconut trees, the humidity, women wearing their sexuality the way a yuppie wears a tie on Wall Street.

Fat chickens roast on a large rotisserie at the roadside buffet, and like the late night air, the meal is hot and sticky. It reminds me of northern Brazil – the coconut trees, the humidity, women wearing their sexuality the way a yuppie wears a tie on Wall Street.

After a minor altercation with an SUV (a few dollars change hands, we drive off), we’re back on the road, I’m DJ’ing up front with my iPod trying to keep Harold the driver awake.

At last, Playa Colorado, a room with a few beds in a strange house, shown around by welcoming young girls with skin the colour of brown sugar. Mosquitoes are in abundance, a warm-up of things to come. I climb into my sleep sheet, reposition the fan, collapse in total transit exhaustion.

Awake to the sound of kids playing, a camera in my face, we’ve overslept, too late to drive to the Delta, but no worries, Chris has got plenty planned to keep us busy.

And so, enter to the left of the stage, Chris Patterson, the Scot of the Jungle, real-life cigarette-commercial man, host to this lush new world.

After sailing in the Caribbean for ten years, Chris found himself the dream chaser for decadent Russian billionaires, organizing multi-million dollar adventures around the world for oligarchs, from balloons over the Serengeti to castles in Ireland, ice palaces in Iceland, to heliskiing in Whistler. 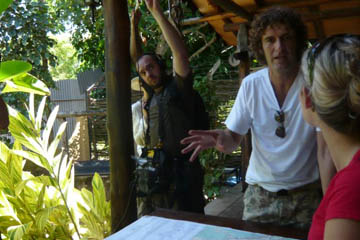 How do the rich have fun? Chris knows the answer, but after a few years riding the perfect wave, he had made enough to build his Jakera Lodge – backpacker heaven, school of life, one block away from Paradise, and just down the road from Dream Street.

Wiping away sleep from my eyes, I wander over from the overflow house to Jakera Lodge to find a cage housing a dozen Scandinavian girls in bikinis, swinging in hammocks.

“We have mosquito nets around all the enclosures,” explains Chris, “and we call this room, the Bird Cage.”

“You realize, nobody will believe a word of this when I write it,” I tell him in a low voice.

“Want to play with a baby river python?” he moves on.

“We found it on Google”

The Jakera Lodge is a hostel of sorts (think hammocks instead of bunks), a Spanish school, a Salsa school, a Scuba school, a Climbing school, a Whatever school. 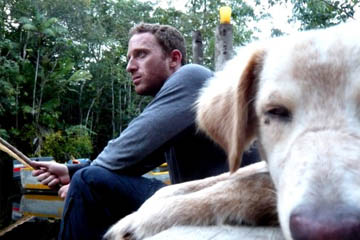 Fishing off the dock

The clientele are mostly European, although all nationalities breeze through at some point, and people stay for anywhere from a few days to six months. It’s about immersion in a culture, in a language.

A few minutes away is Playa Colorado, a beach of red-hued sand, coconut trees, turquoise water. “We had a big night last night,” explains Chris’s partner Brendan, “the guys are a little hung-over.” This explains the tanned limbs poking out of hammocks wherever I look.

Tanya from England has been here for two months, and leaves today. “Everyone thought it would be dangerous to come to Venezuela,” she tells me. “But it’s been totally safe. The locals are friendly and encourage us with our Spanish. The people have been dynamic, there’s always fresh travellers arriving, it’s really a way of living.”

I ask her how on earth she found this place. “Google,” she tells me. “I typed in Spanish and Scuba.”

I speak to some other students – Dutch and Swedish girls. They typed in “Spanish Lessons in South America” and “Volunteer Travel”. I ask my travel partner Julia how on earth she found this place.

“I typed in Jungle Adventure in Google,” she answers.

I make a note to write a story about travelling through the power of Google.

Swimming with dolphins. Brendan organizes an old wooden speedboat from an old wooden pirate and we depart the beach, crowded with Sunday afternoon locals.

There is a nigh a gringo in sight. The water has the sparkle of a paparazzi flash on the tooth of a movie star.

I have a shark phobia since I saw Jaws on a beach holiday when I was six years old.

“Today’s your day,” says Chris enthusiastically, his thick brown curls an affront to balding 39 year-olds everywhere (the secret is aloe vera). And then we see the curved fin of a pilot whale, breaking the surf just a few metres away from us.

“Mucho queso estente vista tacos boutros boutros ghali,” says the weathered pirate of the Caribbean. “He says it is a good omen for today, and the trip,” translates Chris.

Sure enough, within minutes we encounter a pod of dolphins. Two of them leap in the air as if to welcome us. Chris grabs the knee-board. I’m ready for the ride of a lifetime. But first, two bits of personal information for context:

That’s when I find out that a tiger shark bit half the arse off a tourist just last week. And another attacked a fisherman the week before that. Right here at Playa Colorado.

Hungry tiger sharks, cruising around looking for tasty tourist butt. But, screams Robert Plant, “now’s the time, the time is now,” so I ignore the cello in my head, and jump in. The water is as warm as the kiddies section in a public pool.

An Eye With A Soul

The boat pulls off, and I’m being towed behind like a piece of bait on the end of a fishing hook. I read somewhere that dolphins protect humans from sharks. 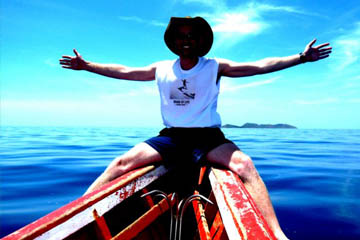 About to swim with the dolphins.

I know that sharks….a dolphin pops up a few metres to my right. Then another. Then they vanish together.

The boat swings left in an arc. I’m looking this way and that way, and then three more dolphins break, and two of them leap in the air in perfect unison.

We swing around again, but they seem to have disappeared, until a minute later, just as I begin to wander if pilot whales are dangerous, two dolphins pop up on either side of me.

For a fraction of a second, I stare into an eye looking right back at me, a playful eye, an eye with soul.

I know I am safe, I know I am alive, I don’t know what I know, except, I just connected with something, something real, something transcendent, and every muscle tenses up and hair stands up and screams and tears well up and organs chime and it’s toccata and fugue on the strings of my soul and in a flash it’s over.

They’re pulling me towards the boat.

I blubber something in response, to the camera that recorded it all, and after a few minutes, realize I’m wading on my knee board like a big fat turtle in shark infested waters.

Moments after I pull myself aboard the boat, as unbalanced as the old, weathered pirate guiding the outboard engine, as Chris decides he would be a good sport and take me canyoneering off a 28m waterfall in the nearby jungle.

Next Time: Welcome to the Jungle