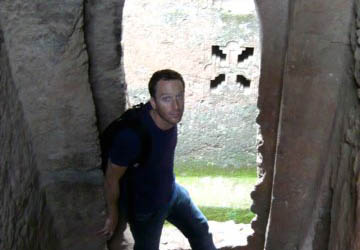 Dark tunnels and crumbling passageways, all
carved out of solid volcanic rock.

It must have come as a surprise to European missionaries arriving on the Dark Continent, eager and ready to convert heathen savages, only to discover that Ethiopia was the second country to adopt Christianity as a state religion, as early as the 4th century.

An ancient kingdom, known as the Aksumites, was one of the largest, most civilized, and prosperous nations of its era, benefiting from its position as a vital trading post between Africa, Asia and the Middle East.

While Europeans were living in caves and hogshit, northern Ethiopia was awash in colourful art, incredible architecture, music and commerce.

The Aksumites faded with the rise of trading posts along the Red Sea, but a new kingdom arose in the 11th century, led by a King Lalibela, who decided to build a New Jerusalem in Africa, just in case the rising Islamic empire swept the real Jerusalem into the paper shredder of history.

Built alongside its own River Jordan, Lalibela is rich with symbols, icons and religious images. And uniquely, they have survived and are still in use to this day.

Carved Out Of Rock

An old toothless woman walks up from behind and gives me a sloppy wet kiss on my arm. I try not to freak out.

The Ethiopian word for foreigner is “ferengi”, and be it an accident of decades of foreign aid, or just irresponsible tourists who should know better, ferengis in Lalibela (and elsewhere, as we’ll soon discover) are good for only one thing, and that is, handouts.

Seconds after departing our van, my ass still vibrating from the stone road, I’m surrounded by children asking for birr (Ethiopian currency). I’m prodded and poked and stare into dozens of upturned hands.

An old toothless woman walks up from behind and gives me a sloppy wet kiss on my arm. So accustomed to my personal space, I try not to freak out. A guard walks up, raises a stick, and the children scatter.

I enter the main gate and buy $20 tickets and pricey $30 video camera permits, and are assigned a compulsory guide as well as someone to watch our shoes when we enter the churches.

UNESCO, in an attempt to preserve the main church of Bet Medhane Alem, have installed ugly scaffolding around it, designed, no doubt, to ruin all photographs. Still, the fact that this huge building was carved top-down from solid rock is staggering.

Raiders of the Found Ark?

We take off our shoes, and enter inside. It is dark and cold and still has much of the original carpeting on the ground (we were warned to wear long pants because of the fleas).

Light streams in from small windows, the ceiling blackened from centuries of candle smoke. 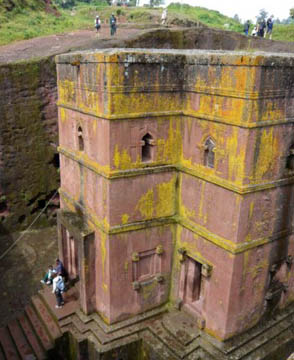 Side view of St George. Hard to believe it
was carved top down from the rock.

Voices echo, dark corners hide piles of carpet and wood, angles and demons. Forget the polished gloss of Europe’s superstar churches. Here, you can feel every one of Lalibela’s 800 plus years, breathe in the past (along with the thick dust).

A robed priest is happy to pose for pictures for a few birr, protecting the sacred inner chamber, housing a replica of Ethiopia’s holiest object, the legendary Ark of the Covenant.

Recall Raiders of the Lost Ark: Indiana Jones gets wind of a Nazi plot to find the ancient Ark of the Covenant, built by the Israelites to house the tablets of the Ten Commandments, given to Moses by God.

The Nazi’s believed the Ark to be nothing less than a powerful weapon, and they were right, the suckers, as Indiana cleverly looked away and the Ark unleashed its supernatural power, killing all the bad guys, and melting the creepy Nazi guy with the glasses (which gave me nightmares for months).

Classic movie, mixing myth and history – and the best part is, the truth is possibly not too far off.

I first became inspired to visit Ethiopia after reading The Sign and the Seal by Graham Hancock.

An English journalist formerly with the Economist, Hancock spent over a decade researching the real story, becoming a literary Indiana Jones, with the resulting book a fantastic mix of history, myth and adventure.

Here in Lalibela, where the Ark passed through, you can still feel the magic of the mystery.

For what became of the Ark remains one of history’s greatest unsolved mysteries.

Its disappearance has been linked to the Knights of Templar, King Solomon’s relationship with Queen Sheba (which resulted in the birth of the first great Ethiopian ruler, Menellek), and all manner of conspiracy theories.

Since Ethiopia’s holiest object is the Ark of the Covenant, and its language shares many Hebraic commonalities, and the country even held tribes of “lost” Jews, Hancock spent much of his time figuring out how this all came to be.

His logic and conclusions are controversial but sound, and having briefly met the guy many years ago, I can testify that he’s definitely no conspiracy theory nut.

Accordingly, the Ark (or an ancient replica) is believed to exist in Aksum up north from Lalibela, where it is zealously guarded by priests, and not even the President of Ethiopia is permitted to see it.

An Israeli traveller tells me her investigations lead her to believe the Ark was destroyed, or maybe it’s sitting in a big warehouse somewhere in Washington D.C, we’ll probably never know. But here in Lalibela, where the Ark passed through, you can still feel the magic of the mystery.

Return To The Beggars

I explore the rock churches, walking inside carved rock tunnels, peering inside doorways to find weathered priests reading leathered bibles. If only I could blink and take photos with my eyes – the images are unforgettable. 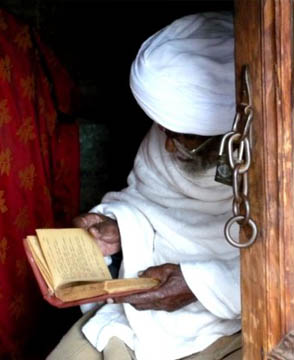 As I return to the surface, I see the open hands again, pleading and begging. I walk down the main street, and the harassment is thick.

I’m warned that children, speaking good English, will tell heartbreaking stories and ask for money for school books, only, it’s a scam, the books are actually exchanged for money, or never bought at all.

They surround us like a swarm, fighting amongst themselves for priority. It’s hard to keep things in perspective. I want to connect with locals, I always do, but I also want to connect with real people, and I want the communication to be pure. I don’t need to buy friends.

“Look, Jordan, I want people to visit this amazing place, but you guys make it very difficult and uncomfortable, and then nobody will come, and that hurts everyone.”

“We are not all like that,” he explains, somewhat annoyed. So we begin to chat. He tells me that his parents are farmers, and he looks after some crops, and is never hungry, and is going to school.

I begin to feel awful about my earlier sweeping generalizations – here I am, another white, rich, western asshole ready to dismiss the natives as beggars and thieves. Everyone’s not out here to use me, to get a buck. I feel much better.

Then Jordan tells me, after all this, that he needs some school books. Damn. I sweep, I generalize.

Africa can be like a beautiful girl you meet at a party. There’s an incredible connection, you laugh, you cry, you open your heart, you embrace. Then she puts out her hand, and tells you to pay up.

I told Jordan to stay in his fictional school, and decide then and there to find a real charity, and make a sizable donation.

Africa can be like a beautiful girl you meet at a party. There’s an incredible connection…then she puts out her hand, and tells you to pay up.

I’m saved that night by a guy named Kassa, who I meet at a small hole-in-the-wall bar selling 40c beers (new record – the cheapest I’ve ever found).

Local reggae music, spiced with Bollywood, is blearing from the TV, and I’m perfecting my local dance moves, which consists of twitching my shoulders while keeping my legs still. I’ve got a nice buzz from the tejj, local fermented honey wine.

There are no girls in the bar, since no decent Ethiopian girl would ever go to a bar, unless they are willing to sleep with you for money, which I am told, is perfectly acceptable in this part of the world. Kassa and I talk about life in Ethiopia, in the west.

We sympathize, we laugh, and naturally there’s no financial arrangement at the end of the conversation. But if I thought I’d made peace with being a walking money bag, I was yet to experience the true ferengi Frenzy.

For that, I’d have to fly back to Addis, and drive five days into the south.

Next: Tribe Watching in the southern Omo Valley