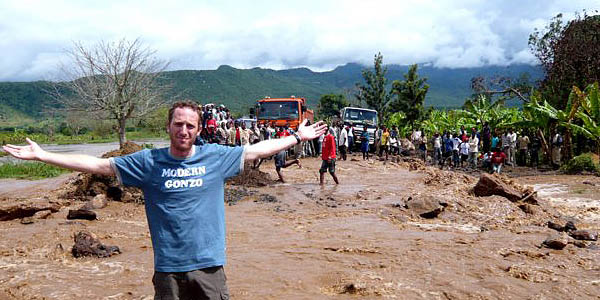 While filming the final episode of Word Travels in Ethiopia, Robin meets an inspiring athlete using his power to give back.

The idea is to get random contacts in random places and see where it leads you. Might be a palace, might be a dark alley, but knowing anyone here who knows anyone there usually leads everywhere.

We travel to learn. We travel to challenge ourselves, our expectations, our thoughts of the world.

In this case, an old friend passed on the details of Joseph in Addis Ababa.

I knew nothing about him, who he is, what he does, only that we had a mutual friend and since the rest of Addis Ababa’s 5 million population were complete strangers, that was a start.

I called him from the hotel bar, and we arranged to meet the following evening over coffee. I’m still grappling with the firengi frenzy, this sense of wanting to give back but not perpetuate, when Joseph rolls in, sent from above to answer my prayers.

Born in Ethiopia, Joseph immigrated to Canada at a young age, settled in Montreal, later Vancouver.

He became the Canadian cross-country champion, competing in the World Championships against Ethiopian greats like Gabriel Hailleselassie, and then made a fortune in the dotcom days as an entrepreneur.

Able to retire in his mid-30’s, he decided to pack his family up and move to Ethiopia to give something back.

Investing In The Future

Investing in various start-ups, Joseph founded a charity called UniqueProjects.org to support orphans, and most recently has become passionately involved sponsoring a group of young kids from impoverished backgrounds who show promise of becoming professional runners.

Many consider Ethiopia to be the capital of Charity, the Home of the NGO. So it’s inspiring to find somebody independently making a difference.

Many consider Ethiopia to be the capital of Charity, the Home of the NGO. So it’s inspiring to find somebody independently making a difference, one kid, one dream at a time.

“Is it challenging to live here?” I ask Joseph, as a local minibus taxi narrowly avoids smashing into us from the left, another from the right, one in front and for all I know one above us too.

“I’m a long distance runner and entrepreneur,” he replies. “I’m made for challenges, but sometimes I think it’s hopeless.” He talks about the crippling bureaucracy, the constant corruption, the pollution, the problem of “thinking poor” in a country with so much potential.

We’re climbing up Entoto Mountain, 8000ft above sea level, one of the few forested areas that remain in the area and offering a stunning view of Addis.

Joseph has arranged for me to go for a run with some of his sponsored runners, along with Megeysa Askule Tafa, one of the country’s top female athletes who won the Paris, Milan and Dubai marathons. 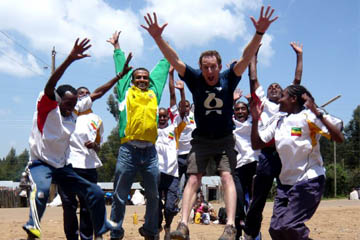 Joseph and his Athletic Club

I wanted to find out more about his programs, plus it would be a great opportunity for the kids to meet a running hero, and leave my ferengi ass in the dust. I had however planned to keep up with them, at least for a little while.

“If you can beat these guys up the hill, I’ll give you a million dollars,” Joseph offers, and I begin to entertain the idea of being a millionaire. My backpack will have golden zippers.

Then the group takes off, running their “normal” pace, which translates into Robin’s full throttle, push-every-muscle-to-the- breaking-point-dash-to save-my-life sprint. Less than a hundred metres later, I’m hacking my small intestines out and the kids are laughing.

Workeneh was a shoeshine boy, Tibebe was homeless, and Kidest a domestic servant. Now they have a trainer, shoes, a place to stay, a basic allowance, and a shot at running on an international level.

Joseph explains. “Look, even if they don’t get to the Olympics, running encourages them to succeed, to discipline themselves, to focus on good, healthy behaviour. I understand what it can do for an individual. These guys were training with no shoes, no homes and one meal a day. This will give them confidence no matter what they decide to do.”

The Reason I Started Traveling

Joseph’s idea has caught the attention of friends and fellow athletes back in Canada, who are assigned a runner and can watch their charity run for gold. As I realized by the constant begging throughout the country, charity can be an overwhelmingly big hole, ready to swallow your money and hope.

And while every NGO needs donations, here was a small, unassuming man making a big difference in the lives of kids who showed him the dedication to succeed.

Meanwhile, I dropped to my knees after the first kilometre, but the kids carried me up the hill on their shoulders to the car. If I had won the million dollars, I’d have a much better idea on how to give it away.

We travel to learn. We travel to challenge ourselves, our expectations, our thoughts of the world.

If I want a holiday, I’ll book an all inclusive hotel on a beach. If I want to party, I’ll go to Ibiza. It’s never easy travelling in developing countries, and harder still in a country where foreigners are largely associated with financial aid.

Ethiopia’s landscape is inspiring, its culture and history fascinating. As more travellers discover it, perhaps the frenzy will subside, perhaps it will get worse.

Either way, the country just might be the very reason I started traveling in the first place.

Have you had an experience that captured your motivation to travel? Share in the comments!