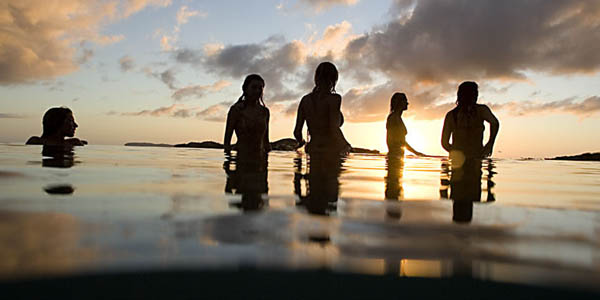 Photo Saracino
“We’ve got a 6-gauge shotgun, a bottle of vodka, a six pack of beer, 60GB of music and a new 4×4 with fat treads. At this point, we’re practically a force of nature.”

New Caledonia is a cigar-shaped island in the South Pacific, a colony of France, with a population of about 250,000.

Although it is staggeringly beautiful, New Caledonia does not get many tourists.

The currency is linked to the Euro, the government is run out of Paris, so what you have here is basically a little chunk of France floating 10 000 miles away from the mainland.

Gourmet mustard, Bordeaux wine, Fois de Gras, patisseries, prominent noses, stable administration. Basically, New Caledonia is unlike any of the other islands nearby (the French colony of Tahiti is a five hour flight away).

Although it is staggeringly beautiful, New Caledonia does not get many tourists.

Given its high cost, its remoteness, its inaccessibility, and its, well, Frenchness, most foreign tourists tend to hit Fiji and have never heard of New Caledonia. (Incidentally, the name was coined by the explorer James Cook, who on discovering the island’s rich greenness and hospitable nature, named it after his native Scottish homeland).

I was convinced that I was also exploring new ground, probably the first South Africanadian to walk these shores, and nobody could tell me otherwise, because they all spoke French. 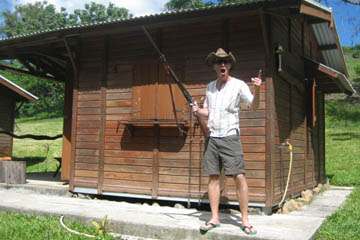 Clutching a 6-gauge shotgun outside our cottage at
the Paddock de la Boutana.

He’s third generation New Caledonian, a guy who has grown up hunting large fish with a spear gun in seawater warmer than pee in a wet suit.

After enduring months of stories about coconut-lined beaches and hunting this, that or the other, I accepted his kind invitation to visit his island and see for myself.

A friendly face at the airport (at last!) and within a half hour out of customs I’m freshening up in a crystal warm stream surrounded my mountains. Philippe has a big 4×4, a swank apartment, and likes to shoot things with his big guns.

The two-and-a-half hour flight from Auckland had cost a bucket, so everything was his treat, starting with a night in the bush, hunting Bambi and blowing away empty beer cans with .22 rifle. Now before you report me to PETA and start packing ziplock bags of blood to attack me outside my apartment, know that deer are plentiful in New Caledonia – in fact, there are more deer than people.

Beside the odd redneck Yankee trophy hunter with a mullet and a nickname like “Colorado Bob” or “Mississippi Pete”, local hunters eat what they kill.

I know this, because just about everyone had a storage freezer packed with chunks of meat.

Paddock de la Boutana lies in the north of the island, on a massive stretch of land, and attracts not only hunters but anyone looking to chill out around large bonfires under a beauty pageant of galaxies.

Phillipe brought his .22 rifle, and his 6-gauge shotgun, so powerful that it practically obliterates any creature unlucky to get slugged. Violence is best preceded with calm, and during a tranquil sunset 4×4 drive along the property, I ruminated on four things:

After grilling some steaks over a wood fire, we joined up with some French tourists for the night hunt.

No less than a few meters out the yard, and the spotlight revealed dozens of deer, grazing on the grass. They were as plentiful as alcoholic blue-haired grannies in Vegas, as abundant as giggles in a Catholic girls high school. 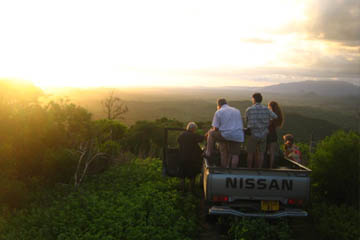 The sun sets over the biggest plain on the island. It’s
almost African.

After the novelty of nature wore off, the hunter selected tomorrow night’s dinner with the spotlight.

A sharp explosion, and Bambi dropped dead. Her buddies ran for about three meters, stopped, and carried on grazing, as if the mourning period was over.

We drove up to the deer, which Phillipe insisted was dead but the legs were still shaking. The hunter sliced its throat like you might slice a cucumber, picked it up and threw it into the back of the 4×4 with the rest of us. I put my hand on Bambi’s coarse hair, still warm to the touch, and positioned my feet so that the blood wouldn’t stain my sandals.

We drove back to the Paddock, where Bambi was hung up and her innards removed, the way you might pull your laundry out the washing machine. And that was that.

I was worried that the experience might traumatize me into a vegetarian, but to be honest it all seemed quite natural in a primeval sort of way. I was offered a kill but declined when I learnt that I’d have to gut and clean my victim. Plus I don’t have a storage freezer in my backpack for the meat. 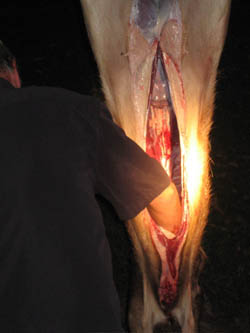 It took about 10 minutes for the deer to
be emptied, with the experienced
precision of a surgeon.

Instead I opted for sitting on the porch blasting empty beer cans, in the time honored trailer-park hick tradition. Even from some distance, I am happy to report that I have a sniper’s eye, although the shotgun’s recoil was so immense it left a large yellow bruise just below my shoulder.

Instead, I am happy to shoot with my camera and kill with my photographs.

Food For The Bold

When a New Caledonian asks you to guess what it is you’re eating, shut up and keep chewing.

The veal was delicious, until I found it was turtle. I’ve tried turtle soup before in New Orleans, but this was steak, and well, all I could think about was that old, wise turtle character in Neverending Story.

Suddenly I was chewing on Yoda. Strong in the taste it was. The chef, Michel, is a former gendarmerie with enough guns to start another French revolution.

His storage freezer was stocked with all manner of creatures, the strangest of which were two frozen fruit bats, fortunately averted from the menu by Phillipe’s knowledge of my love for Batman. Throughout the week, Phillipe was determined to flaunt the island’s culinary offerings, both French and indigenous.

I tried Fois de Gras for the first time, various local deep-fried delicacies, chocolate croissants, fruits, tropical fish, octopus, and the unfortunate cheese-tasting incident that left me gagging, my breath smelling like the underwear of a coal miner with gastroenteritis. 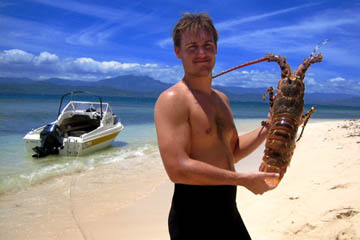 Man vs Fish, but hungry man will always win!

On a hot, windy day, we jumped in a boat and motored out a couple kilometers to the reef that protects the island from heavy waves and hungry sharks.

Snorkeling above, I watched Phillipe and his friend Jan spear all manner of fish, and one enormous lobster that put up a vicious fight.

As we know, I’m not the ocean-faring type and pretty soon the strong currents and wind took its toll, plus my shark phobia kicked in when Jan mentioned he’d seen a five-meter tiger shark a few weeks back right where we were hunting.

So I fed the fish with my breakfast and we headed back to shore, divvying up the spoils for a sensational fish BBQ that evening.

I gutted my first fish, cut myself posing with the lobster (weighing heavier than a break-up conversation on the alter), met some friendly locals, and soaked in the sun with the number one local beer, creatively named, Number One beer.

That night, I heard a gunshot in the distance. One less Bambi was walking the plains.

On the way back to the capital of Noumea, home to half the island’s population, we drove past dozens of hill tribes, men with thick dreadlocks smoking marijuana under coconut trees, cappuccino kids with afros diving from bridges into the sea below.

I felt that special buzz of truly discovering one of our planet’s glowing jewels, hidden deep down in its cleavage.

Old kanak men would walk along the winding highway with a rifle slung behind their back, just in case they see anything for dinner.

New Caledonia did have some political turbulence in the late 1980’s, when the France had to send the army in to restore peace after tribal liberation movements got nasty, along with over-zealous whites storing too many guns.

But peace has reigned for twenty years, and given the volatile state of other islands in the South Pacific, locals are confident peace will continue.

I felt that special buzz of truly discovering one of our planet’s glowing jewels, hidden deep down in its cleavage, as if only for the eyes of its most persistent lover.