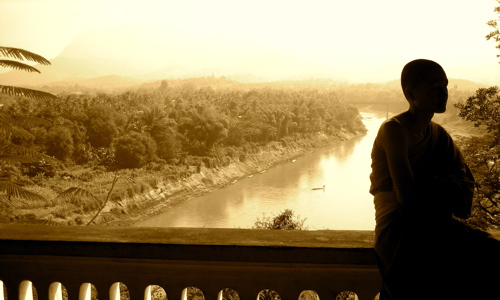 Feature photo and photo above by Robin Esrock.

I was stumbling around a music festival near Budapest when a young Serbian girl invited me into a warm tent for a cup of tea.

I’ll always remember her reaction when I told her I was traveling to several dozen countries around the world for a year. Her mousy nose scrunched up, and she asked, sincerely, “why?”

I have plenty of heavy ammunition for just such a question: different cultures, experience, yada yada.

But I’ve never quite found the real answer to that question, the reason behind visiting so many places in such a short space of time (although one year might not seem that short; two weeks in countries like Peru, Bolivia or Poland barely scratch the surface).

Perhaps something inside tells me this is my one, only and last chance to see the world.

This week I think I may have found the answer, and it’s very simple. 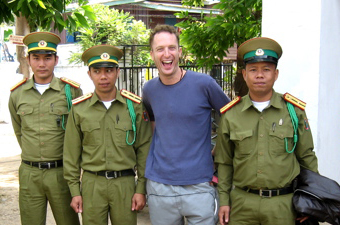 I had no intention of visiting Laos at all. It wasn’t on my itinerary; it wasn’t a place I had to see. I knew hardly anything about the country, and no clue what the capital was (do you?)

I know that the U.S. conducted a secret war in Laos in the 1960’s – knowledge gained primarily from watching “Air America” and “Lethal Weapon” with Mel Gibson. Frothing at the mouth, Mel told me Laos is a center for opium and heroin production, full of Vietnam vets heading up massive drug rings, and also contains thousands of tons of unexploded ordnance.

A landlocked country bordering Thailand, Vietnam, Myanmar, China and Cambodia, Laos is run by a communist government and is the poorest country in Southeast Asia.

Also, if one more cute kid smiles at me, I’m going to have to start adopting.

Luang Prabang, north of Laos, is the religious center of the country. I arrived at dusk and was jolted by the pace. The lack thereof. My ragatg group of eight walked through the night market where women sat by their colorful bags and cloths, chattering amongst themselves, or sitting back peacefully, playing with their children.

No one yelled at us. No one tried to sell us anything.

We walked along the narrow market path, marveling at the quality and price of the goods on offer.

We were fresh meat with backpacks, and yet the starving masses were leaving us alone. Could these people actually respect our right just to be? The Thais sure didn’t; in fact, not many people in third world countries do (and who can blame them?)

The tuk-tuk drivers descended on us like mosquitoes, but even they took “no” for an answer. A few minutes away, in a lush, paved neighbourhood, we found a guesthouse, handed in our laundry for 80c a kilogram, and investigated the rumour that Lao beer, named Beer Lao, is amongst the finest in the world.

The French influence is heavy in Laos, being a former French colony, and a French businessman setup the Beer Lao brewery with the very latest technology and brewing techniques. Beer Lao lives up to its reputation, which is why every traveller you meet in Laos is wearing a Beer Lao T-shirt. A big beer costs $1, about the same price as the T-shirt.

The locals appeared extraordinarily content with nothing, an attitude that seemed to rub off on travelers too.

Waiting over an hour for a salad, it’s just impossible to get upset with the guy in the restaurant because he won’t quit smiling. I got the impression that if he could serve the food for free, he would.

There is something tangibly beautiful about the people of Laos, most clearly evident when you see children playing in the streets. Their greeting of “sabadee” is yelled out with such enthusiasm it can break your heart. 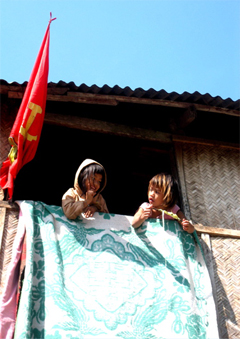 This innocence and warmth is all the more touching when you consider the violence of Lao history.

Half the country is waiting to explode; the US bombed the countryside into oblivion, in secret, for nine years (at a cost of $2 million a day), a civil war followed, a communist government still runs things into the ground, drugs are illegal, yet rampant.

There is little industrial development, no railways, the state controls all media, and the national highway is as smooth as a bowl of rocky cornflakes. This was weighing heavy on my mind, so it was time to chase the dragon.

Like sex-tourism in Thailand, narco-tourism is strongly discouraged in Laos, but many people come here for exactly that.

In Colombia or Peru, you can buy grade-A cocaine for as little as $8 a gram (in New York or London, it can cost as much as $160 a gram). Laos is part of the Golden Triangle that supplies most of the world’s raw opium, later refined into heroin.

Opium itself dates back 6000 years and has been used as a powerful medicinal agent ever since, primarily in cocktails like morphine.

Quite simply, opiates take away the pain, but due to their highly addictive nature, quickly bring it back, and then some. Still, opium has inspired famous writers for centuries, and if Conan Doyle could puff the magic dragon, why can’t Modern Gonzo?

Although I had moved out my first guest house to escape screeching early morning roosters, the friendly young manager had offered to procure us some sticky opium resin, and quickly fashioned us a bong with a water bottle, tin foil, empty pen cartridge and candle wax.

We sat around taking hits while sweet smelling smoke filled the room. 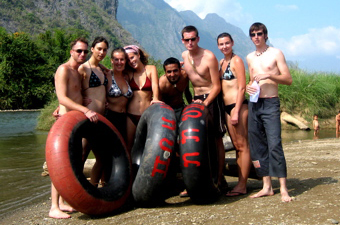 Although I got a slight buzz, after several inhales I saw no dragon to chase, and soon enough we had smoked all the black gunk.

Somewhat to my relief, my experience with opium did not lead me to some wet, back alley, where a leathered, hairy guy named Chang was ready to fill my pipe.

But if opium is so addictive and widespread, maybe that’s why everyone in Laos is so happy. I would investigate my “happy” theory later.

I travel because every once in a while I stumble across a universe so unexpectedly inspiring it can change everything.

Some locals have offered me some traditional Lao whiskey, made from rice, and I can’t refuse.

Their generosity and warmth are unnerving, and totally inspiring. “A top ten day?” asks my friend, Minesh, a fellow round the worlder. “A top three day!” I respond.

I have traveled to enough places and seen enough things to know when something is truly special. I don’t know how long Laos will continue to exist in its current, bizarro state, but I feel blessed to have discovered it at all.

To the Serbian girl: I travel because every once in a while I stumble across a universe so unexpectedly inspiring it can change everything.

Cultural understanding, beautiful scenery, wonderful people, food – it’s all important, but when new worlds blossom where before there were none, you cannot help but feel some of the magical power of life itself.