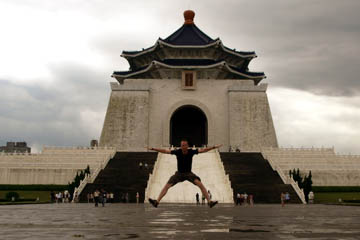 There are only 23 countries that recognize that the Republic of China (also known as Taiwan) has a right to exist.

For a democratic country with a free press and healthy economy, it bespeaks the awesome power and influence of its neighbour, the People’s Republic of China. Confused? Here’s a quick history lesson:

Originally discovered by the Portuguese, the lush, tropical island was known as Formosa, a fertile paradise located a few hundred kilometres off mainland China.

The Japanese occupied it for decades, using it as an important base during World War II. They lost the war, they lost the island. In 1949, mainland China was embroiled in a devastating civil war that pitted the communist forces of Chairman Mao against the incumbent Chiang Kai Shek.

Kai Shek lost, and fled to Taiwan, where he proclaimed Taipei to the new capital of the Republic of China. Mao established the PRC and was about to wipe out his sworn enemy across the Taiwan Strait when the United States got involved as a means to establish a presence in the region.

Two million people fled the mainland for Taiwan, mainly intellectuals and supporters of the previous government. Neither would recognize the legitimacy of the other to exist, and for a while Taiwan became an important piece on the Cold War chessboard, backed by the US, China backed by the Russians.

China’s threatening to invade poised the world on the brink of war, and Taiwan’s outspoken criticism of its ethnically homogenous neighbour did little to help.

As China descended into agrigarian communist chaos, Taiwan embraced a free market, rapidly industrializing and pouring in cash. It became the fourth leg of the powerful economic Asian Tiger.

Just about every major country in the world refuses to acknowledge Taiwan’s independence for fear of pissing off the Chinese.

Time passes like gas, and things change. The Asian Tigers were wounded in the 1990’s, and China has embraced economic reform. Although China still has between 700 to 800 missiles aimed at Taiwan, a defrosting of tension is inevitable.

Taiwan elected a new government, which has placed more emphasis on economic development and less on independence posturing. The first high-level talks in decades have opened up Taiwan to Chinese tourism.

Just about every major country in the world refuses to acknowledge Taiwan’s independence for fear of pissing off the Chinese, who have a billion potential customers for their products.

When I ask some locals what they think the future holds for Taiwan, they look to Hong Kong. Might Taiwan become another Special Administrative Region of China, part of the whole, yet undoubtedly different?

Manufacturing has shifted to the mainland, but Taiwan remains one of the world’s leading suppliers of electronics. The country is prosperous, democratic, optimistic if under threat, and a strange glimpse into what China may have become if the communist forces were defeated.

Or perhaps, what China may become in the future. Class over. 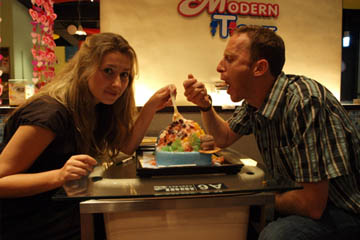 I read about this toilet themed restaurant online, and I’ve become quite fascinated with proving that sometimes you CAN believe what you read on the internet.

So here we have a restaurant where customers sit on designer toilet seats, eat from toilet shaped bowls, drink from urinal-shaped cups, and buy poo paraphernalia. I ordered the number two, a delicious chicken curry.

It arrived in a miniature porcelain toilet bowl, and the carrots floating in the brown stew reminded me of the last time I drank beyond my talent. I’m not taking the piss, but the potential for puns here are endless.

Rock bottom prices, fit for a king on a throne, the food was anything but crap, which explains why there are now 10 stores across the country. I ask the owner what inspired such a scatological take on dining?

“Just for fun,” he says. The same answer applies if you ask me why I chose to eat here. 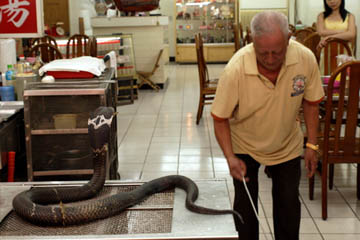 What I won’t eat is snake, and I won’t drink the bile of snake bladder either.

Snake Alley was once home to whores and superstitious inequity, but today it is the home for tourist stalls, out-of-place sex shops, and somewhat distasteful (and therefore thoroughly fascinating) snake kitchens.

Drinking the bile is supposedly good for virility, eating snake soup is good for skin conditions. Since I owned a pet snake once (albeit one that bit me), my gut sank watching them hung up, skinned and split for this bizarre serpentine cocktail.

Large cobras atop a cage were taunted by a creepy old man, and he picked one up and threw it towards the camera. For a big man, my cameraman Sean moves quick.

Our tourism board guide Wen showed remarkable and admirable restraint. Normally, government officials do their best to sanitize the experience of a travel writer, and we often have to break rank to see this kind of thing. It’s pretty horrific, but it’s there for the locals, not for the tourists.

Real travel often offends the sensibilities. That’s what makes it so much fun.

There are some interesting rock formations at Yehliu Geopark, up the scenic north coast, eroded into spongy phallic shapes by wind, water and time. The coastline is beautiful, but there are no leisure boats to be seen, for reasons of national security. 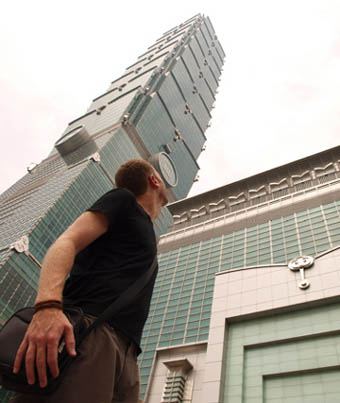 A large number of surfers are in the still ocean water, waiting for a freak wave from a typhoon nailing the Philippines to the south. It’s a rare blue-sky day during monsoon season, when heavy rains unleash themselves onto all those poor scooter drivers.

Like the mainland, the sky here is mostly a haze, fogging the view from the way up high. Taipei 101 is not a lecture class; it was the world’s tallest building.

An engineering marvel with 101 floors, it has only recently been pipped by the Burj Dubai, but remains a symbol of Taiwan’s economic power. Women give birth to life, it appears men give birth to phallic symbols of longstanding greatness.

Inspired by the flexibility of bamboo, the building is covered in symbols, from massive coins on the exterior for good fortune, to stylized dragon gargoyles for protection.

It has the world’s fastest elevators (60km an hour, you reach the 85th floor observation deck in just 37 seconds), and four massive damper balls to stabilize the building from strong winds and earthquakes.

This has been fun, but now I’ve got stories to write, pitch and hopefully sell. Hosting a travel show is one of the best jobs in the world, but there’s more work than you realize setting up those beauty shots, improvising decent dialogue, shlepping from one place to the next.

10, 12, 14 hour days, every day, and then comes the writing, the photo galleries, tying up interviews and frayed nerves.

Not that I’m complaining, just that I have to wrap this up before we take off to Korea, and a new adventure begins.

Next time: Robin reports from the annals of South Korea!

How to plan for 2021 travel in the age of COVID, according to 23 travel agents
Everything Americans need to know about traveling to Mexico right now
7 countries you can’t enter if you have a DUI
The best stops on the Blue Ridge Parkway
13 airports where you can get tested for COVID-19 in the US

Flying is safer than grocery shopping, according to new Harvard report