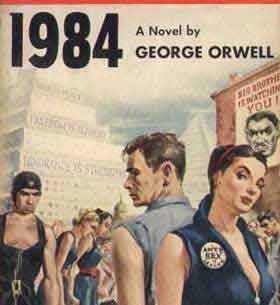 It’s been 60 years since George Orwell wrote 1984, his forward-looking satire of a sad and dysfunctional society.

The country of Oceania has a government who monitors every aspect of its people’s lives, participates in a never-ending world war, and rules over a society overrun by poverty due to sacrifices being made for the war effort.

The government officials, though, still live the good life.

Heh, heh, good thing Orwell was so off base about the future.

Nationalism was the central theme of this imagined society, with unquestioned love for a leader who may or may no longer be alive.

Orwell also looked at the idea of “transferred nationalism,” or the psychology used to transfer the love or hate for one government to another. Sexual repression was yet another overriding theme of the book–though this repression came from the government, not religious organizations.

To honor the anniversary of this book that gave the previous generation a look at what the future might hold (seriously scary how close he was), The Complete Works of Orwell has the entire book online.

Now remember, Big Brother is always watching, so don’t make any sudden moves on the internet.

Do you think Orwell was dead-on about what was to come for all societies, or is his vision a thing of the past? Share your thought below.

Loop from Boston to California and back on the ultimate US train trip The days of US passport dominance may be over When we travel again, don’t all rush to the first place that will take you 17 things you didn’t know about the Cook Islands 20 of the funniest idioms for people learning English