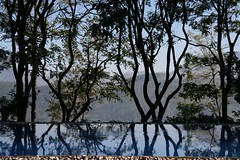 No wonder we despair at the future mankind is forging for itself, one filled with hopelessness and religious fanatics hiding behind guns.

However, what the news does not show is a modified trend amongst the citizens of the world – a transfer from salvation to liberation; a change in mindset and taking responsibility, teaching other like-minded individuals by example.

As a reporter I travel to many third-world countries, those with just emerging markets, and of late have seen this thread as a constant in all of them.

I had the privilege of meeting one such pioneer when I recently travelled to the tropical paradise island of Sri Lanka, just off the southern tip of India.

What the guidebooks promised and what I found were worlds apart.

Sri Lanka’s cities are full of dilapidated buildings, untouched since independence in 1948, with garbage strewn everywhere. The markets – noisy and confusing – are shrouded in tropical cloaks of decay. Nobody seems too concerned about living in squalor.

With no motorways and no sidewalks, pedestrians are forced to walk in the chaotic traffic where the Ã¢â‚¬Ëœevery man for himself’ rule applies. Thus I extracted myself from this mayhem and headed to the mountains. 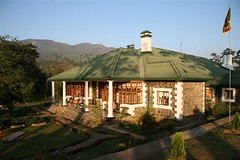 I arrived at the Thotulagalla Tea Estate and was met by a barrel of a man who extended his meaty hand at me, giving mine a vigorous shake.

“Welcome”, he growled, “I’m Newman. Mike Newman.” He indicated that I should follow him up the sloping driveway to his house beside the factory. The Thotulagalla Estate is some 6,000 feet above sea level and produces organically grown tea which is processed at the on-site factory.

What the guidebooks promised and what I found were worlds apart.

Mike Newman, a seasoned planter who hails from a respected cultivating family, manages the Thotulagalla Organic Tea plantation with a labour force of some 350.

Mindful of the impact conventional farming practices have on the environment and society, the Thotulagalla Estate is committed to using only organic, environmental and socially ethical methods in the growing and processing of their product and carry the certified Level A (full organic) status.

We decanted into Mike’s 4×4 and drove through the immense Estate. I asked that he stop for a while so I could photograph and observe the spellbinding image of the vivid saris amongst the waist high emerald bushes.

The hands of the tea pickers resembled butterflies flitting over the shrubs, moving independently of one another, nipping off the youngest and topmost leaves by snapping the stem, then tossing the pickings into the large baskets on their backs.

“Ceylon Tea,” Mike announced, “has for the past century had the clear distinction of being the finest, most fragrant tea in the world.” He considered the landscape before him.

“We are blessed with the ability to grow tea in an ideal climate and in near perfect conditions here in the Uva province. By us using only purely organic methods of growing and harvesting, we reduce the caffeine and tannin, which undoubtedly contributes to the distinct richness and flavour you’ll find in your cup – which is as nature intended.” 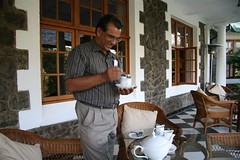 I enquired after the need to go organic, seeing that conditions where already so agreeable.

“The health benefits, to start with, are numerous,” Mike claimed.

“An organic workplace provides for a safer working environment. In conventional agriculture there is widespread misuse of agro-chemical fertilisers, herbicide and pesticides due to lack of awareness, due to not reading instructions, due to not wearing protective clothing or lack of chemical storage knowledge. No such issues exist with organic products.”

He continued. “The misuse of chemicals often leads to products reaching local markets with harmfully high level of pesticide residue. This does not occur with organic food.”

“As nothing is paid to national- and multi-national companies for the supply of chemicals, money stays on the farm, in the farming community, and in the country, thus ending the poverty trap.”

I noticed some tea pickers being bussed off to a building in the valley and enquired after their destination.

“Nursing mothers are transported to the crÃƒÂ¨che three times a day,” Mike claimed.

Encouraged by this show of humanity, I enquired after the other facilities Thotulagalla Estate provides their staff and discovered that not only was there a crÃƒÂ¨che, but a primary school and a newly built secondary school too

The teachers are provided by the Education Department; along with an estate medical practitioner, a brand-new community centre, and really good housing – each with a patch of land for self cultivation or live-stock grazing.

“They give me a free hand and let me run the Estate as I see fit,” Mike said.

I walked around the little village which contained neat brick houses (water and energy supplied by the Estate) and found willing models for my camera. Mike and his petite wife, Hirani, chatted with off-duty staff that came out to greet them. Clearly the Newman’s were held in high esteem.

“This is our newly built community centre,” Hirani Newman announced. “It was built with funds partly derived from Fair-trade and partly our Social Committee.”

Although it is optional to buy Fair-trade labels the Thotulagalla Estate take it a step further and direct a sizable chunk of their profit towards the Estate’s Social Committee.

The Thotulagalla Estate is owned by Greenfield Bio Plantations and has five foreign directors – two based in India, two in Australia and one in Switzerland, and promoted worldwide by Lanka Organics based in Colombo.

“They give me a free hand and let me run the Estate as I see fit,” Mike said.

The Taste Of Hope

We proceeded to the large white tea factory where Mike guided me through the complicated process of tea withering, rolling, firing, drying and grading.

“Our present range of organic teas includes organic black tea from pure Ceylon to English Breakfast, green teas, herbal and fruit teas.” I sampled each one and could not decide which I liked more, then decided to try them all again.

Standing at the precipice of the Thotulagalla Estate, mist swirling around my ankles and a light breeze dancing with my hair, I surveyed before me a mystic valley in hues of blue and lavender, stitched with wisps of silver mist.

I could hear shrieks of hilarity of a joke being told by the usually serene pickers behind me and distant laughter of school children ambling home.

I turned to look at Mike and Hirani, who were embraced, and quietly wondered where the television news cameras were now.

I thougt how refreshing it would be if, for just one day, we were bombarded by images like this – images portraying citizens of the world offering hope and prosperity, kindness and guidance.

I felt somewhat humbled standing in the presence of true leader.

Cindy-Lou Dale is a journalist and travel writer who goes beyond being strongly evocative of place and tells of the idiosyncrasies of cultures and the wonder of a destination, speaking to the very soul of travel. Visit her website Cindy-Lou Dale.
What did you think of this article?
Meh
Good
Awesome
Bookmark
Posted In
Travel