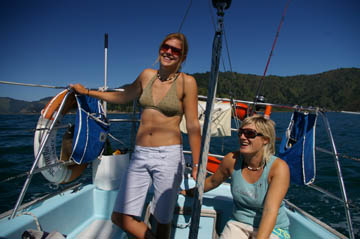 I met Mia in New Zealand, while on a bus that was taking us sky diving. I was only along to take photos for my friends, for I had gone skydiving twice before and wanted to save some money.

The initial spark between us was ignited before we arrived at our destination.

The situation could have proceeded like this: guy meets a girl en route to go skydiving and they hit it off. Afterwards, they join each other for a drink at the pub, maybe stay out late, overindulge, and ‘accidentally’ end up in one or the other’s tiny hostel bed.

But I’d fallen down that path before. And now, I didn’t want to repeat another ‘nice to meet you, have a nice life’ scenario. I didn’t ask Mia to the bar that night.

Serendipitously, we ran into each other at the grocery store, and instead I invited her and her friend to come wine tasting with my English mates and me.

Now I am no connoisseur, but after hearing so much about New Zealand’s reputation for producing wine, I gathered this might be a fun, and quite different activity, for the backpacker at least.

Turns out, we hit it off spending the afternoon together with our friends in a decidedly anti-backpacker atmosphere. I realized these are the types of off-the-radar activities that attract the attention of fellow romantic travelers.

Doing the same-old same-old is going to land you the same-old short-term relationships, the awkward goodbyes coupled with the nasty hangovers. A better idea is to find something out of the ordinary, and simply try to have fun.

Here are some more tips for finding real romance on the road:

Forget The One Night Stands

To say it’s fairly easy to ‘hook up’ on the traditional backpacker trail might be an understatement.

To say it’s fairly easy to ‘hook up’ with someone following the traditional trail in many of the most popular backpacker destinations might be an understatement.

These party places produce an atmosphere where the beer flows easy and everyone is looking for a party. Adventure sports like skydiving, river rafting and bungee jumping only enhance this party atmosphere, charging it with adrenaline and hormones.

That’s not to say that this is a bad thing: many of my first trips abroad included several jaunts into a post-adventure bar scene, and good times were had by all.

I met some interesting people and had a lot of fun. But if you’re after a true romance, and not your average one-night stand, you need to look elsewhere, broaden your horizons, and distance yourself from the masses.

Because if you’re just like everyone else, you won’t stand out in the crowd, and your ideal companion might pass you by. 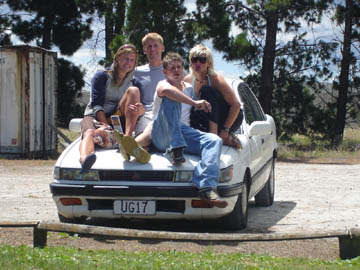 I grew up sailing on the Chesapeake Bay, spending a large portion of my childhood summers on my dad’s boats. I knew I would somehow get on a sailboat in New Zealand; after all, Auckland isn’t called the City of Sails for nothing.

My English mates had never experienced the magic of the wind and the water, and I wanted to show them. Conveniently, the girls had tagged along with us after New Year’s, and we invited them to join us.

Mia and I continued right where we left off after the wine tasting, and I taught her everything I knew about sailing. We spent five days in close-quarters with only each other’s company, the endless blue water and a sky full of stars.

The experience cemented our relationship and is the reason we are still a couple today. The bottom line: find your niche.

In short, just do the things you love. I was at my best when I was at the helm of that little boat. When you’re in your element, your true personality shines through. This is the only real way to get to know somebody.

There is nothing more exotic than relaxing under the stars while you stumble over the words of a new language, or share stories from opposite side of the planet.

I’m an American. The guys I was traveling with when I met Mia are English, and she is Swedish. Her friend Johanna is Finnish.

Between the five of us, we represented four different nationalities, and this made for endless conversation about our cultural similarities and differences.

Remain optimistic when you meet people, and always assume the best from them. You might have the occasional disappointment, but overall the interesting people you’ll meet and the exciting (and sometimes confusing) conversations you’ll have will far outweigh your defeats.

Enjoy hearing stories from other perspectives. This advice can also apply romantically.

There is nothing more exotic than relaxing under the stars while you stumble over the words of a new language, or share stories from opposite side of the planet.

The things we have in common with the rest of the world make travel comforting. But the things that are different create the romance.

As with anything, finding romance abroad depends on your attitude.

Often the greatest experiences and the most interesting people emerge from the least likely of scenarios. But this can only happen if you abandon your expectations.

Let yourself go and enjoy the moment. But keep your eyes open – because you never know who might be waiting around the next corner.

What are your tips for finding real romance on the road? Share in the comments!