“We are making an emergency landing” is not a phrase I ever want to hear while flying. It happened to Shashi Bellamkonda on a flight from Washington DC to Boston, and instead of panicking and screaming, “WE’RE ALL GONNA DIE!” he did what any digital marketing mogul would do – he live tweeted the entire event.

Bellamkonda’s plane made a safe landing after smoke began coming out of the cabin’s vents, and air pressure dropped. Bellamkonda’s tweets circulated the web in real-time, showing his followers photos of passengers donning oxygen masks, standing on the tarmac after landing in Delaware, and eating pizza while waiting for a new plane to arrive. 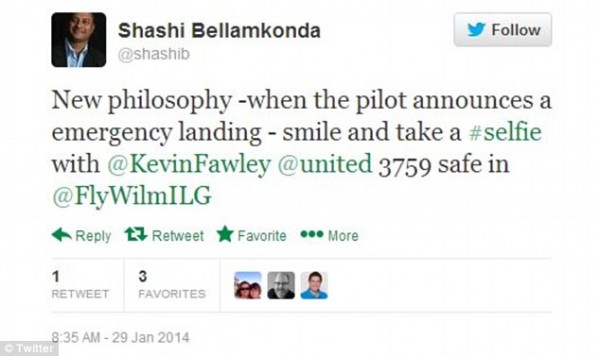 The fact that Bellamkonda, and most of the passengers on board, remained relatively calm during the situation is pretty amazing to me. It shows their complete trust in the pilot and landing procedure, and that even if your plane is going down, social media can help you crank out one last #YOLO for all the world to see.

See more of Bellamkonda’s photos and tweets via The Daily Mail.