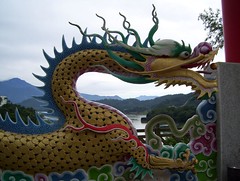 During my first class teaching English in Taiwan, my student Christine came up to me with an armload of Chinese books, and hand-calligraphed New Year’s scrolls.

She also provided an invitation for language exchange and a smile, which can only be described as the Cheshire cat’s official welcome to Asia.

Cats are lucky in Taiwan, I’d heard, and I now believe this to be true – along with the idea that relationships proceed a lot more quickly when you speak each other’s languages.

Nearly two years later, I know Christine not only as my student, but a friend and teacher of Chinese language and culture.

She has deepened my interest in all things Chinese, and provided me with helpful language instruction.

I think that East and West are now colliding into one big social and cultural melting pot, in which we cease to be strangers.

We are quickly becoming a global village in which businesspeople and tourists alike must learn to communicate better. For Westerners, learning Chinese is the first step in opening the doors to the wild, wonderful land that Asia is.

My teacher and I would now like to offer some helpful hints.

As someone who places great value in making international friends, it is my hope that more foreigners will learn something about the intriguing history and culture of China, Taiwan, and other Chinese-speaking countries. 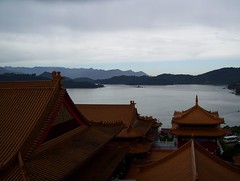 Firstly, Chinese language is most accessible to foreigners through first learning Pinyin, the English spelling of Chinese sounds.

In contrast, Hanyu Pinyin uses English letters to represent Chinese symbols, but the pronunciation follows the Chinese used in Mainland China, which is a little different from Taiwanese, and is popularly used worldwide.

One problem with Pinyin, however, is that the sounds sometimes don’t directly translate into the sounds of the characters- they are more of a rough phonetic guide.

I suggest that foreigners first begin with Pinyin, and then gradually move on to learning the Taiwanese or Chinese characters to fine-tune their pronunciation.

Secondly, it is important to explore the various benefits and drawbacks of choosing to learn either the (original) traditional Chinese characters used by Taiwan, or the so-called “simplified characters” instituted by the communist government of China.

While it is recommended that students of Chinese learn both, newcomers to the language will usually pick one or the other to learn first. The simplified characters are easier to work with during the initial stages of learning Chinese.

Only the traditional characters can truly demonstrate the beauty and history of the language as it evolved through time.

However, only the traditional characters can truly demonstrate the beauty and history of the language as it evolved through time.

Original Chinese characters have their beginnings in hieroglyphs, and have developed over the years. For example, the modern character for “wooden” represents a tree’s shape, and the character for “forest” depicts what looks like three trees.

This illustrates how Chinese is a system of associations. For this reason, foreigners may find the evolution of Chinese characters to be extremely interesting.

Finally, the student of Chinese must decide on their method of learning, that is, whether they would like to study at a university, private language school, or on their own.

The opportunity for Chinese language learning is becoming more and more accessible at several Chinese and Taiwanese universities, where some teachers are learning English as well, to better communicate with students.

Students should take care to find a qualified teacher with standard pronunciation skills for example, the Beijing dialect, so that they can be well-understood.

Essential characters can also be downloaded from the internet on the Taiwanese website, Fun With Chinese Learning. This sight also offers many unique insights into the language. 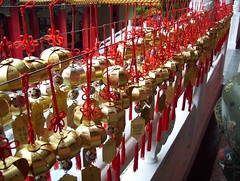 When undertaking any Asian language program, particularly Chinese, students should know that the language and script revolves around the concept of connectivity.

Spoken Chinese cannot be separated from art, politics, literature, or history. It is most exciting to combine Chinese language studies with one of the above subjects, to see how the language evolved throughout the ages, and to experience the many facets of Chinese-based cultures.

Students might, for example, integrate their Chinese language learning with a tea ceremony, or martial arts, both traditionally practiced in all Chinese-based cultures.

A student open to these experiences will no doubt make many Chinese friends to converse with, and will feel as if they have been blessed with the culture as well as the chance to learn the language.

The Chinese and Taiwanese are amongst the most welcoming people I have ever met. Most of my spoken Chinese has resulted from my many amazing relationships with Native speakers.

There are also over 150,000 characters to learn. However, many of them are not used in modern-day times, so don’t worry! Try to take the language one step at a time, without getting overwhelmed.

There are also over 150,000 characters to learn. However many are not used in modern-day times.

I myself began with Hanyu Pinyin, and then moved on to Chinese calligraphy, to help me remember the characters, and learn how they are used as part of a sentence or poem. If you are a visual person, the many opportunities to learn Chinese through traditional art forms, will absolutely delight you.

With these tips, we wish you luck on your journey, and whether you choose to study on your own, or attend a formal program, we hope you enjoy the process of learning.

While English is today an important language, Chinese language, history and culture continues to be a fascinating discipline, which remains at the forefront of our changing world.

Emily Hansen is a travel writer and teacher based in Shimla, India, where she is working on a book about her experiences as an expat. Her native land is Canada, and she has traveled to over 30 countries, and has lived in six, including Germany, China, Korea, Thailand, Taiwan, and now, India.

Dr. Christine Yue Juan is a professor in Tainan, Taiwan, where she teaches Chinese history, culture and literature. She is also a well-known calligrapher in Taiwan, and learns English in her spare time. She has a great interest in bringing Chinese and Taiwanese culture to foreigners.
Tagged
Travel
What did you think of this story?
Meh
Good
Awesome