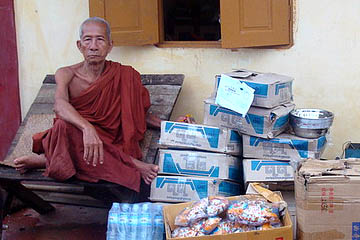 Waiting for relief in Burma. Photo by TZA

A few weeks ago I was going about my business, striding through the lobby of a building where a giant television was broadcasting CNN.

My previous three days had been consumed with a heap of work that made me retreat into my own little shell. I hadn’t been following any newsworthy events.

But today, in passing, I heard the news anchor say that things were getting worse for the people of Myanmar in the wake of Cyclone Nargis.

I stopped dead in my tracks and listened.

For the next few minutes, I stood in the lobby, hypnotized by the images of disaster and destruction in Myanmar (still known as Burma to democracy advocates).

There in the lobby, I couldn’t grasp the specifics of the situation. Rather, snippets of the news segment were weaving a horrifying web through my consciousness: “tens of thousands dead,” “No access to potable water,” and “Yangon paralyzed.”

My heart swelled with the emotional weight and felt as if it was dropping through my stomach, landing with an agonizing thud on the cold linoleum floor.

After my visit to Myanmar two years ago, I knew the shaky camera phone images were doing little justice to the disaster.

Memory Of A Trip

I grew frustrated with the seeming lack of compassion from companions and peers. I wanted them to have the same perspective.

My brief visit to Myanmar was an unexpected vision quest, an emotionally fulfilling, inspiring, and eye-opening experience to witness a complex country Orwellian in nature and seemingly frozen in time.

Because of economic sanctions, Myanmar is a country shrouded in mystery to many Americans, even to those who travel the Southeast Asia circuit.

I’ve felt a profound connection to the events unfolding in Myanmar, even if I had to experience them vicariously from the sterile comforts of a college campus: from the monks protest in October the so-called Saffron Uprising to the ongoing detention of Aung San Suu Kyi to the devastation of Cyclone Nargis.

These images of Myanmar projected in the mainstream media magnified my longing to return as soon as possible.

That night, I stayed up until the morning hours, checking and rechecking international news websites and The Irrawaddy a Thailand-based newspaper covering Myanmar, for more information.

With Myanmar’s free press quashed by the government and a moratorium on foreign journalists, I realized my efforts were relatively futile.

While the lack of information was frustrating, I grew even more frustrated with the seeming lack of compassion from companions and peers. I wanted them to have the same perspective.

The Power Of Empathy

After a week of grasping and reflecting upon every news-bit coming out about the country, my grandparents (seasoned travelers themselves) asked if I’d been paying close attention to the havoc in Myanmar 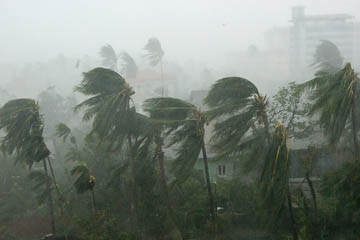 I nodded and my grandfather replied, “Well, when you’ve been to a place and fallen in love with a country, and something like this happens, it’s hard not to feel invested.”

I was struck with the significance of a seemingly universal travel truth.

Obviously, traveling challenges and changes perspective. In our plugged-in, hyper-global society, perspective and context of a particular travel destination expands with the direct traveling experience to a realm of intricate visceral emotions, particularly when a disaster befalls upon a beloved place.

Once the essence of a country and its people are held dear to the heart, images of that place never appear the same again. Rather then being mere abstractions, they are humanized according to the traveler’s experience.

For me, images in newspapers of flooded Yangon streets near the Sule pagoda weren’t just abstract televised images; they were streets brimming with memories, crowds of laughing, smiling human beings, corners where I walked in a longyi, drank tea, and was hushed on touchy political subjects.

No matter the location, a natural disaster broadcast to all corners of the earth tends to invoke a sense of sympathy from the global body.

However, the melancholy concoction of emotions from a tragic disaster is amplified if you’ve been there – eaten the food, drunk the local beer, wallowed in spicy olfactory sensations, rode a bicycle, reveled with the locals.

A connection to the country, geography, culture, and most importantly, the people, instills a feeling deeper than the shallow, distant sort of sympathy that’s limited to news reports and newspaper articles.

Perhaps this is what Paul Theroux meant when he wrote in The Great Railway Bazaar:

Extensive traveling induces a feeling of encapsulation, and travel, so broadening at first, contracts the mind.

Traveling narrows our perspective of a particular place while expanding our worldview. After the adventure is over, travel memories invoke a profound empathy, encouraging one to push the dramatic change of paradigms to others and further participation in the goodwill citizenship of a global community.

I can’t think of a better justification for wanderlust.

In the meantime, I’m still glued to news from Myanmar and I still can’t wait to get over there, to pitch in my share.

What do you think about how real-life experiences can open your heart to a certain place?