14:06 Apr 22, 2020
Top Countries
Top CitiesView All Destinations
Trending Countries
Trending Cities
Load More
Daniel Suelo has lived without money for more than 10 years, and in so doing, accomplished much of what people look for but fail to realize in travel.

WE FIRST WROTE about Suelo — “Social rebel or mooch?” — in 2009. Three years later, as shown in the video profile above, he’s still living part-time in his cave near Moab, still dumpster diving and foraging for food, still posting regularly on his blog. He still seems stoked. 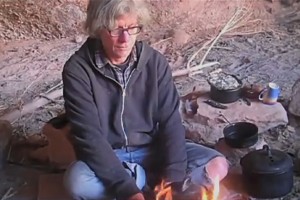 While the conversation around Suelo tends to focus on root questions of economics, I’d like to look for a second at his simple living adherence in the context of travel. Simply put, Suelo’s relationship with Moab reminds me of travel at its most meaningful — when the traveler is engaged with a local community, but lives freely on its outskirts, spending extended time in the surrounding terrain, becoming, as it were, a “student” of the place.

The irony is that most of us feel compelled to travel far from our home grounds to experience this. In a recent interview, Mark Warren, a naturalist from Georgia who lived in a tipi for two years, gave this example:

I have a physician friend who lives here in the Appalachians, where we are surrounded by thousands of acres of National Forest. This part of our state is famous for its hunting opportunities, yet he flies to Montana or Colorado or Idaho, where a guide meets him and leads him to the particular animal he is anxious to kill that season.

This longer documentary from 2006 on Suelo really shows how his life emulates that of traveler, a couchsurfer, one truly experiencing a place. It all makes me think how many of us would save ourselves the trouble (not to mention resources) if instead of going somewhere to experience this, we just stayed at home and became adherents of simple living.

Tagged
Travel Moab, UT, United States
What did you think of this story?
Meh
Good
Awesome

Moab, Utah is a Bikers' Playground

This crew scored the sweetest views in Moab

Moab is a bikers’ playground

A Dirtbagger’s Guide to the American West