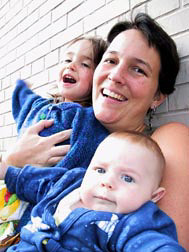 By her own admission, Ayun Halliday will probably never set foot on the Moon.

But she will go just about anywhere else-especially if someone else is footing the bill.

Finances, however, are not a deterrent to the budget traveler with an eye for adventure and a knack for comedy-intentional or otherwise.

Ayun’s 2003 collection of essays, No Touch Monkey! illustrates some comic moments, whether it’s re-enacting Apocalypse Now in a drug-induced stupor in Vietnam, reclaiming her shoes from a gang of monkeys in India, or being at the mercy of a Madam in Amsterdam’s Red Light district.

More recently, Ayun completed a five-week trip with her husband (playwright Greg Kotis) and two children (daughter India and son Milo) through the former Yugoslavia, as detailed at http://whogoslavia.blogspot.com.

We caught up between trips to talk about travel, kids, and a certain Francis Ford Coppola movie.

BNT: Did you travel very much growing up?

AH: I vacationed in places where my parents had friends or family connections: Columbus, Cincinnati, Tucson, one of the Apostle Islands in Lake Superior. And I logged a lot of time lolling seatbelt-less against the front passenger door in my grandparent’s Buick-two full days of driving from Indiana to Florida, another two days to get back.

Now that I think about it, my paternal grandmother is the one who probably got the ball rolling. She moved from the Midwest to Arizona, and a visit to her usually included a day trip across the border into Nogales, Mexico, which I loved.

Nogales was my first taste of the colorful, the cacophonous, the non-sterile…unless, of course, one counts the midway of the Indiana State Fair. I also found it compelling that certain things could be procured more cheaply than at home.

My dad bought knock-offs of all his favorite liquors, which then broke in our luggage, ruining my dotted Swiss dress and reducing my mother to tears.

What were your influences for traveling in your adult years (and how did you afford each trip)?

The first time was because I’d been cast in a production that was going to the Edinburgh Fringe Festival.

In retrospect, the production was a bit of a scam that allowed the producers to fly to Edinburgh, and live there for the entire summer, without having to spend a nickel of their own money. Pretty much everybody who auditioned was cast, and then it was up to us to ante up a flat fee to cover housing and other expenses – a detail my father finds much joy in dredging up whenever possible.

My European debut was financed by years of squirreled away birthday, Christmas and graduation money, which left just enough for a Eurorail pass, and a couple of picnics.
Every successive trip was financed by waiting tables, and not, as some Amazon customer reviewers have erroneously suggested by “Mommy and Daddy’s money.” 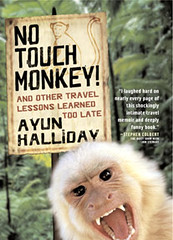 Lest I gain the enmity of trust fund babies everywhere, permit me to state that as a parent myself, I’d love nothing better than to lob some cash my kids’ way if it would help them to see the world. I’d much rather do that than buy them a Sony Playstation.

As far as choosing my destinations, someone would put the bug in my ear about some country I’d never really considered, and then I’d read up on it, and look at photos, and spend a lot of time thinking about how wonderful my life would be if I could only get to Rwanda/Thailand/Vietnam…

Since No Touch Monkey was published, it’s been my great good fortune to have some travel experiences underwritten by various producers who are mounting my husband’s plays.

I’ve scored free trips to San Francisco, Tokyo, and Berlin-thanks in part to Greg’s willingness to cash in one business class ticket for two in coach, and my mother’s enthusiasm for spending time around her grandchildren without me hanging around, bitching about doughnuts and TV.

Your first essay in No Touch Monkey! details traveling with your then-boyfriend on the cheap (and the breakdown that ensued). Was it that bad?

I’ve always enjoyed comic stories that really plumb the depths of self-inflicted misery, which I suppose makes me a bit of a liability to know. Poor “Nate.” That chapter covers 24 debauched, combat-filled hours of a trip that lasted six weeks.

We had our share of good moments, as he pointed out when a mutual friend tipped him off to the book’s existence, and his role in it.

You’ve slept on boats in Amsterdam and trains from Salzburg to Munich (thanks to a Eurorail pass). Where’s the oddest place you’ve slept?

In a leaf pile in a public park in Sintra, Portugal. I was awakened at dawn by the sound of a mulcher.

As a member of the fairer sex, what have been some of your biggest challenges when traveling?

Navigating the foggy area between behaving in a friendly, open manner and setting myself up for an opportunistic groping.

Keeping the squabbling and resentment to a minimum with companions of the un-fairer sex.

Have you been able to watch Apocalypse Now since traveling in Vietnam?

Also Hearts of Darkness, the documentary about the nightmare of filming it. Every time I hear “The End” I think of the ceiling fan in that bar, with the body of a helicopter painted behind its blades.

What was traveling with India and Milo like as opposed to traveling solo or with Greg?

Even in a spontaneous situation like our recent itinerary-free month in the former Yugoslavia, the world is somewhat less of your oyster when kids are along. They get tired, they get bored, their palates are still discouragingly narrow. They have become the primary topic of on-the-road squabbling between me and Greg. 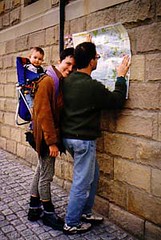 On the plus side, I’ve found that people are particularly friendly when you have kids along: folks who otherwise might have been too shy to start a conversation will start by talking to the kids and then widen the circle to include me and Greg.

Our last night in Serbia, we were in this little bar that we’d gone to because it had a sign in the window that said “Pizza.” After some failed attempts on our part, a local man volunteered to help us explain to the barmaid that the children would balk if she topped the pie with a big puddle of ketchup, as is the local custom.

He was very shy and very sweet, and we had a lovely time for the next few hours, drinking beer and piecing together a conversation about life in Sremski Karlovci, life in New York, and the challenges of parenthood.

Having the kids along puts us on a different, more interesting plane of interaction.

Was that the first major trip with the kids?

No, we’d driven around California a few years back, and I’d taken them to Mexico, but this was the longest trip and it felt like a more full-on adventure, probably because we pulled them out of school to do it.

As seen in your recent book, Dirty Sugar Cookies, you’re also a foodie. What have been some of the more curious, Anthony Bourdain-like things you’ve eaten?

With the exception of some ant eggs and a civet stew in Northern Thailand, most of the curious Anthony Bourdain-like items have been procured in New York City.

I’m always forcing people to try the shrimp paste grilled on sugar cane at the Doyers Restaurant…and now that I’m eating meat again, there’s a whole world of tendons and offal to explore in the outer Boroughs.

Where do you draw the line between travel and tourism?

The older I get, the more I try to remember that there’s more than one way to skin a cat. A lot of factors come into play-some of us have the luxury of time, but not money. Some have money but no time.

Those are the qualities to strive for, whether you’re on a ten-day cruise or hitchhiking around the world.

What do you wish you knew about budget travel in the past that you know now?

That it’s a beautiful thing to blow the budget every now and then. That said, you get a lot more bang for your buck in say, Southeast Asia, than you do in Europe, where my shoestring adventures started.

What’s one place you’d go back to in a flash?

Just one place? Okay, I’ll close my eyes and spin the wheel and wind up in Varanasi, India, where I’ll rent a little room in the old town and stay for a couple of months.

Where would you go given the opportunity?

Failing that, how about some super chi-chi eco-spa in the middle of some impossible-to-get-to rain forest, where I’d dine on organic food, sleep on 500-thread count sheets, and receive all sorts of traditional, healing massages. I assume that by “given the opportunity,” you mean someone else is footing the bill.

And where do you think you’ll never set foot?

Olivia Giovetti has lived in and explored the better part of Europe on a bohemian budget. Freelance travel writing seemed like the next obvious step and her publishers include EuroCheapo, Paper Magazine, and Classic FM. A former New Yorker, she now lives in Los Angeles.
What did you think of this article?
Meh
Good
Awesome
Bookmark
Posted In
Travel