14:06 Apr 22, 2020
Top Countries
Top CitiesView All Destinations
Trending Countries
Trending Cities
Load More
Dan White set out on the Pacific Crest Trail to find himself. Instead he lost his mind. But then he found himself. 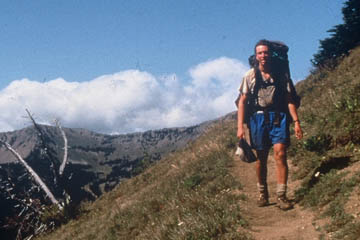 On the trail / Photo Dan White

Dan White was 25 and working an unfulfilling newspaper job in small-town Connecticut when he dropped everything and headed west with his girlfriend Allison for what he envisioned as “an American safari.”

Their terrain was the Pacific Crest Trail, which begins in the Mexican desert and stretches north through 24 national parks, 33 wildernesses and six out of the seven North American climate zones to end 2,650 miles later in Canada, which by the time hikers arrive is in the middle of winter.

Never mind that Dan and Allison were novice outdoorsmen.

Never mind that they started their walk late in the season, which meant many of their days would be short and cold. They were determined to walk the entire PCT, no matter what obstacles they encountered-and they encountered many.

Dan’s humorous yet poignant tale of these misadventures, The Cactus Eaters: How I Lost My Mind – and Almost Found Myself – on the Pacific Crest Trail, has received much attention and praise since it was released in May.

I caught up with him to talk about his book and how the trail made him a better person.

BNT: It’s becoming increasingly common for 20-somethings to take a break from their professional lives and spend a year or so chasing an adventure. Were things different in 1993 when you took off for the PCT?

Dan: In some ways, they were scarily similar. Allison and I decided to hike the trail during another national recession. It was quite a bad one.

Businesses were folding left and right, and there were these avalanches of layoffs. This meant that when you did something impulsive, there were immediate consequences if you messed it up.

The moment we left our newspaper jobs, those jobs were erased from the rolls forever. It was a very serious situation – and it underscores our impulsiveness at the time, and our desperate need to escape from our lives.

When you leave a stable job to do something on a whim, and the economy is booming, that’s one thing. But we inadvertently set up a situation in which we had no choice but carry on with the trail, no matter what happened to us out there.

We had no place to live and no jobs that someone was holding open for us. Our life aside from the trail was kind of a blank slate – and that’s one of the reasons we stuck with doing it, even though we were obviously in over our heads.

Let’s talk about your book. When you were writing it, did you conceptualize it as a work of travel writing, humor, memoir, or something else?

Let me put it this way. Nothing about this journey was the slightest bit funny during the actual journey.

I think of the book as a “hero’s journey'” but with an odd hero and heroine. Take your classic hero traits and at first it seems you won’t find any of them here.

At times I was a kvetcher and a navel-gazer, not a likely survivalist, and Allison was this clean-scrubbed Midwestern girl who was forced into this crazy situation. And I think all those elements make this book a memoir-comedy, with some tragic elements thrown into the mix.

Let me put it this way. Nothing about this journey was the slightest bit funny during the actual journey.

I had to set aside the memories and let them marinate for a while. After a few years, I got to the point where I could look at myself – and at Allison – with the right amount of distance.

You are an endearing narrator in large part because of your mistakes. Is there one you still can’t believe you made?

Well, I have to say that the cactus sucking and chewing incident is the one that still gets to me.

I am referring to an infamous scene in which I shove a large piece of cactus in my mouth and start chewing on it without even trying to remove the spines beforehand.

I should be grateful that the incident provided a title and central focus for the book – that moment where anyone else but us would have said “forget this” and given up – but I must admit that the scene still embarrasses me, and I get so thirsty when I read it out loud.

It’s considered a comedic highlight of the book, but I still haven’t forgiven myself for doing that. In fact, the incident was so extreme that I emailed Allison and I asked her, “Did this really happen? Could I have done such a thing?” She said, “Oh yeah, you sure did. You were out of your mind!”

Do you think your journey-and your book-would have been different had you been more experienced? 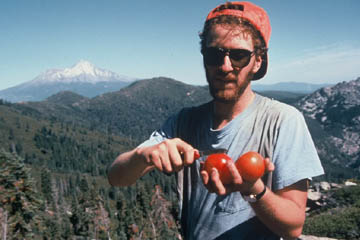 Well, I do think that it’s possible to have a really strong adventure story and be an extremely competent outdoorsman, mostly because nature is so unsentimental and nature can make fool of us all, no matter how much we think we know.

I read a book by John Haines, a poet who worked a trap line in Alaska.

It’s hard to imagine a more seasoned survivalist, but there are still moments of tension because he’s up against irresistible forces, such as hunger and gnawing cold, and his need to kill, and use a certain amount of brutality, just to survive.

The same holds true with Alone, the book about Admiral Richard Byrd trying to survive a Polar winter. No matter how competent you think you are, you always come up against the elements and your own weaknesses.

In my case, being a greenhorn and being impulsive served the story because it increased the scale of the adventure, and the likelihood of failure. Inexperience forced me to compensate in a big way with other traits, such as perseverance and obsessive dedication.

In some ways, I went really overboard. I know that it’s a “warts-and-all” portrait of a walker who in some ways was silly and terribly self-involved. But the PCT was kind of a finishing school for me. It might sound sentimental to say it, but I’m a better person for walking the path.

So this trip was pivotal in your life?

Absolutely. It shaped me in many ways. I know that the subtitle implies that my vision quest was kind of a wash, but really, I learned more about myself – about my flaws, about the best and worst sides of me – from that one walk.

This whole idea of using the wilderness to mend the broken pieces of yourself. For me that is definitely true.

Some of the lessons did not even unfold along the trail. It took such a long time for the lessons to really sink in – and some of them really came to me following a very difficult post-trail adjustment period.

There’s this American tradition that started with John Muir, this whole idea of using the wilderness to mend the broken pieces of yourself. For me that is definitely true.

I’m much more patient because of that trail. I have more empathy now, because in some respects I failed to show proper empathy on the actual walk and regret that. Even my pain threshold is somewhat higher now!

Did you think at the time that the experience might be something you’d one day write about?

Well, I had some sense, but it was the wrong sense. I had this vague idea that I might do a silly, cutesy little book of fumbling around in the woods. 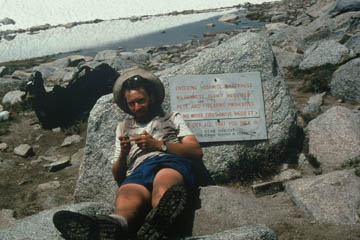 The strange thing is, you can see that self-consciousness, that searching for material, when you read the first two or three diary entries from the trail. But I soon abandoned the idea of ever doing a book at all and started concentrating on just surviving out there and trying to finish what I started.

The diary entries get much more raw and more “real.” So I ended up doing most of the journey while having no idea that a book would come out one day.

Sometimes I even feel a little guilty that I’ve co-opted the writings of a younger self who didn’t know that his foibles and excesses would be read by thousands of people.

Do you think good travel books can come from experiences where writing is the intention?

I am sure that Bill Bryson had a book contract prior to setting off on the Appalachian Trail – and that book is a true classic as far as I’m concerned.

But my book would not have been the same if I’d set out with the idea of writing something about it. I think it would have been much more self-conscious and constricted in some ways.

What made you decide that you wanted to tell this story?

It was one of those situations where you’ve lived through something but aren’t done with it. In one respect it was interior; it was this whole idea of writing something out so I could make sense of it.

Do you still hike?

Yes, but on a much smaller scale and with fewer expectations.

What would you tell someone who’s considering making a similar journey?

Prepare yourself. Be open to beauty and wonder, but brace yourself for chaos.