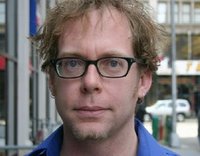 He’s the poster-child of a Walking Party travel writer. He eloped to Italy with fellow travel writer Jessie Sholl. He watched a pig get slaughtered outside of Prague and used that for his contribution to Traveler’s Tales Prague (which he also co-edited with Sholl).

More recently he has become a sort of Indiana Jones for the Gen-X set (his current book is on the search for Jesus Christ’s foreskin which, up until 1983, was allegedly preserved in the Italian hill-town of Calcata).

While Farley’s website is a voyeur’s dream (it holds most of his articles for your reading enjoyment), it still begs enough questions to last a keg of Pilsner Urquell. Recently, we were able to ask David a few of those questions (sadly minus the beer).

BNT: So, how goes the quest for the Holy Foreskin?

I love talking about Jesus’ foreskin (and, really, who doesn’t?)

I’m trying to remain mum about it until the book comes out in Spring 2009, which isn’t easy because I love talking about Jesus’ foreskin (and, really, who doesn’t?)

BNT: You didn’t set out to be a writer; what made you take up the written road?

I wish I could say I was one of those kids who had some intrinsic desire to be a writer from an early age-writing books with crayons when I was five years old, and so on-but my childhood fantasies were mostly occupied by rescuing Princess Leia, hitting a game-winning home run in the bottom of the ninth inning at Dodger Stadium and becoming a rock star (in that order, thankfully).

When I lived in Prague, in my mid-20s, I had a lot of unique and bizarre experiences (such as watching a pig get slaughtered in the Czech hinterlands and living with a varnish-sniffing addict whose only English was the lyrics to classic rock songs) and I’d often think: if I were a writer, this would make a great story.

When I did start writing a couple years later, those were some of the first stories I tried to write.

So it turns out, I did have these subconscious desires to write-in my case, about my travel experiences-but it didn’t emerge until I was in my mid-20s or so.

BNT: What hooked you into traveling? 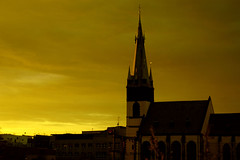 I grew up in a Los Angeles suburb called Simi Valley. Though it was just over the hill from Los Angeles County and the San Fernando Valley, the town of had little by way of “worldliness.”

There were two Chinese restaurants (one of which was called ‘The Chinaman,’ by the way); one bookstore (if you don’t include the two Christian bookstores), and one Japanese restaurant. This was a town of 100,000 people on the periphery of America’s second largest and, perhaps, most culturally diverse city.

I never really fit in with the center-right-wing, mono-cultural aesthetic that seemed to pervade everything in Simi Valley. So, I vowed to flee as soon as possible, which I did. In college I took a trip to Europe with one of my professors and I became enraptured about seeing the rest of the world.

I think because the suburbs were so sterile and so aesthetically redundant, I developed a passion for putting myself in environments that were antipodal to where I grew up. I didn’t know that I wanted to be a travel writer at the time, but this was when I vowed to create a life for myself that involved as much travel and as little routine as possible.

BNT: One of your first travel articles is on eloping in Rome. Was it everything you expected it to be, or did you miss Kool and the Gang and the open bar?

I do love an open bar (as many of my friends will attest) and who doesn’t love Kool and the Gang? But every time I go to a wedding, I think about how glad I am that we took off to Rome to get married. Nothing against the traditional wedding, but there’s just so much pressure and stress.

BNT: Your arsenal of articles is centered mainly on the Czech Republic (and Italy). With the help of Traveler’s Tales Prague, do you find yourself pigeonholed as The Prague Guy?

“Arsenal of articles.” I like that. One strategy I’ve tried in terms of getting travel assignments has been having a beat-pick a place you know well and focus on it.

Get some pieces published and/or write or edit a collection of travel essays on the place and, in theory, you become an authority. So when you pitch an article on the place, you won’t have to do much convincing that you’re the perfect person to write it.

I had a fair amount of articles on the Czech Republic published before the book came out and in the run up to the book’s publication, I sent out a bunch of article pitches on all things Czech, certain I’d be able to ride the book’s coat tails to a few high-profile assignments. No one bit.

After the book’s release failed to help get me any assignments, I decided that Prague and I needed some space.

BNT: Has Prague lost any of its luster for you with the flood of tourists? What do you think will be the new Prague? 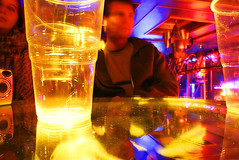 Prague was also flooded with tourists when I lived there in the mid to late Ã¢â‚¬Ëœ90s too, but most of the travelers were European. It was odd how an EU entry suddenly made the place “safe” for the Rick Steves set to venture to the “East.”

Before a few years ago, I think a lot of people had this idea that on the other side of the old Iron Curtain you’d still see people queuing for bread and the toilets would have cardboard for toilet paper.

As for the “new Prague,” it was, is, and always will be the village of New Prague, Minnesota.

BNT: What was it like working with your wife on Traveler’s Tales: Prague? Have you collaborated on anything else since?

Curiously enough, the collaboration didn’t result in many fights. None actually. We agreed unanimously on the stories we thought were the best fit for the book.

But when we realized that all the stories would be very short-and, in general, quite similar to each other-the project lost some of its excitement.

BNT: How do you find time to work in between traveling? Does splitting your time between Calcata and New York help or hurt matters?

In terms of freelance writing, it’s really the best of both worlds. New York is a great place to be because most of the magazines are based here and you end up meeting a lot of editors and other writers at parties and media events or through friends.

Being in Italy for an extended period of time is beneficial: you’re already there, so a publication doesn’t have to pay for you to fly there and, because you’re there, you appear as an “insider,” thus making you an attractive candidate to get an Italy-based assignment.

I’m always astounded at how unprepared many Americans are for what they’re seeing.

Also, if you’re living there, you’re much more in tune with what’s going on, so coming up with good angles for articles is much easier. In terms of being “in between” assignments, I pay the rent by teaching travel writing (at New York University) and working as an editor and a restaurant critic at a foodie site called Gayot.com.

BNT: Even as a travel writer, do you ever feel American Tourist Guilt? Or do you tend to be able to blend in with your surroundings?

People seem to dress a particular way when they’re on vacation. But I think we get a lot more respect if we dress up while on the road. For that reason, I dress the same way when I’m on the road as I do in New York.

Besides that, I don’t want to be pegged as an American since we’re hated around the world more than ever these days. So if not wanting to be recognized right away as American is “American tourist guilt” then I’ve got it.

Whenever I’m in, say, Rome I’m always astounded at how unprepared many Americans are for what they’re seeing. They have little sense of history for what came before 1776 and therefore have a hard time putting things into historical context.

Our education system is an international embarrassment. I didn’t know anything about the outside world when I got out of high school. I think this is one of the reasons why in my own writing, I’m always trying to put things into a historical context, hoping that someone will read something I write and be both entertained and enlightened by it.

BNT: How do you feel about the digital age-and the plethora of online travel magazines-and its impact (or lack thereof) on the traditional print journalism?

I think the growing popularity of online travel magazines is great. They’re starting to get more and more respect.

It’s really, really hard to break in to the print travel mags, which mostly have a strong emphasis on service-oriented articles.

Most people get into travel writing for

WorldHum, PerceptiveTravel, and, of course, Brave New Traveler are just a few of the many travel websites that are leading the way.

BNT: Finally (and the most important question), care to elaborate on your amazing dancing skills? Is an interpretive foreskin ballet on the horizon?

You’ll have to come out to New York and see for yourself. Tim Patterson-your Brave New Traveler colleague and a great writer and all around super guy-recently made me the poster boy for “The Walking Party” type of travel writer.

Olivia Giovetti has lived in and explored the better part of Europe on a bohemian budget. Freelance travel writing seemed like the next obvious step and her publishers include EuroCheapo, Paper Magazine, and Classic FM. A former New Yorker, she now lives in Los Angeles.
Tagged
Travel
What did you think of this story?
Meh
Good
Awesome